Texas Gov. Signs ‘Save Chick-fil-A’ Bill
to Stop Discrimination Against Religious Groups
06-12-2019
CBN News Andrea Morris
Texas Gov. Greg Abbott signed the “Save Chick-fil-A” bill into law Monday.
The new law prohibits the government from taking “adverse action” against an individual or business based on contributions to religious organizations.
The Texas legislature passed SB 1978 after the San Antonio City Council voted to block Chick-fil-A from opening a restaurant at the city’s airport.
Related

Chick-fil-A’s owners have donated to Christian groups like the Salvation Army and the Fellowship of Christian Athletes. And critics have accused Chick-fil-A of discriminating against the LGBTQ community by supporting groups that may hold biblical views about sexuality.
Supporters say the bill was necessary to protect religious freedoms, including the rights of individuals or groups to donate money to groups with religious beliefs.
Dallas News reported that Gov. Abbott, a Republican, did not hold a public signing ceremony, but had previously tweeted his support of the bill.
View image on Twitter 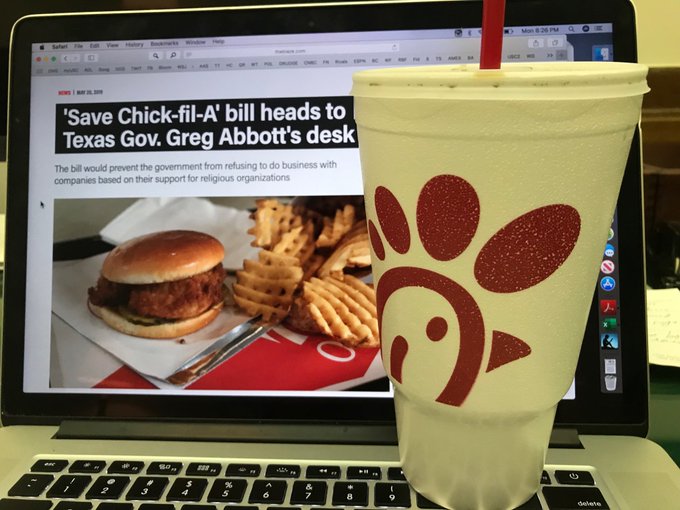 So. What are the odds I’ll sign the Chick-fil-A bill?

I’ll let you know after dinner.

5,413 people are talking about this
Twitter Ads info and privacy
As Faithwire previously reported, the controversy has become so prominent that even a presidential candidate has now weighed in. Pete Buttigieg, who is running for the 2020 Democratic nomination, has said he’d be open to brokering a “peace deal” between Chick-fil-A and those who disagree with the restaurant CEO’s views on marriage.
State Rep. Jessica Gonzalez (D-TX) said the measure was an insult to her personally as an openly gay woman. “Of course this bill is aimed at me,” she said. “It’s about reminding those of us who have never belonged not to get too comfortable.”
And Democratic state Rep. Celia Israel (D-TX) claims Texas’ Chick-fil-A law is all about “hatred.”
But Republican state Rep. Matt Schaefer (R-TX) said there’s a legitimate need for the bill, arguing that the real hatred is directed at people of faith. “Should any city council be able to refuse me as a vendor in their city simply because I make donations to my church, which holds a biblical view of marriage?”
Chick-fil-A has created a culture that is known for its commitment to traditional Christian values. It is one of the most successful food chains in the US, earning the dedication of patrons and the regular praise of fans on social media.
Share
Tweet
Email
+11

Where Did The “PROPHETS” Go? – Kynan Bridges

Prophecy: “I’m about to Crash Both Parties Republican and Democrat” 7/17/2021- Hank Kunneman

Methuselah Is Doing Very Well: This Extinct Tree from Time of Jesus was Revived from a 2,000-Year-Old Seed

Two urgent reasons we must prove election fraud that we have overlooked. Mario Murillo

Exposing the Source of Evil in America Part 2 | Give Him 15: Daily Prayer with Dutch | July 23