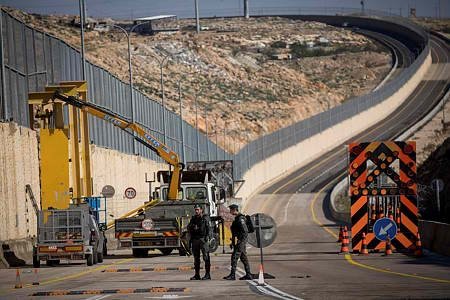 Israel is building new barrier wall along the border with Gaza to protect the roads and communities from terror attacks coming from across the Hamas enclave.
According to a report broadcast on Israeli News Channel 12, one section of the concrete wall has been completed and work on the next section has begun. The new solid barrier is replacing a porous fence. The wall will not only prevent terrorists from entering Israel, but also block the view of Hamas militants, preventing them from firing rockets at cars traveling along Israel’s southern border roads.
The decision to build the cement wall came after 68-year-old Moshe Feder was killed on May 6th while on his way to work when an anti-tank guided missile fired by Hamas terrorists from the Gaza side of the border hit his car. Feder was survived by his wife and two children.
The IDF has since decided to build more concrete security walls along other vulnerable border roads as well.
Love For His People, Inc. founded in 2010 by Steve & Laurie Martin. Charlotte, NC USA