“A Vision of Amish Buggies and the King’s Carriage”
Bill Yount, Hagerstown, MD

I was awakened on a recent morning by the clicking sound of trotting horse hoofs. I then heard the Lord say, “Come meet those who have tilled My land unnoticed for a great harvest. My Son shines on their clotheslines to give them the garments of praise and the robes of My righteousness.”
God then brought back a word I released originally in 2006, where I saw an Amish buggy turning into a King’s Carriage. I’m releasing this word again as this vision is suddenly reappearing with the King now in the Carriage.
“Your steps formed a highway through the seas with footprints on a pathway no one even knew was there.” (Psalm 77:19 TPT) (To Subscribe to the Elijah List subscribe here.)
Bill Yount
Blowing the Shofar Ministry
*************************************
Watch our Elijah Streams broadcast at: ELIJAHSTREAMS.com.
Your donations truly help us keep these emails free for you. Donate at:

“A Vision of Amish Buggies and the King’s Carriage”
Bill Yount, Hagerstown, MD 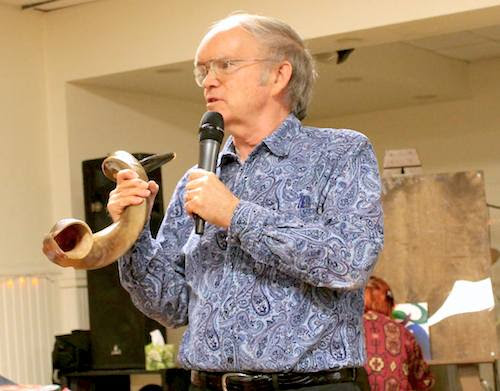 I saw an Amish buggy, pulled by a white horse, turn into a king’s carriage and prance onto the highway of glory!

“And they sang a new song, saying, Thou art worthy to take the book, and to open the seals thereof: for Thou wast slain, and hast redeemed us to God by Thy Blood out of every kindred, and tongue, and people and nation; And hast made us unto our God kings and priests: and we shall reign on the earth.” (Revelation 5:9-10)

“And I saw Heaven opened and behold a white horse, and He that sat upon him was called Faithful and True…” (Revelation 19:11)

The Shofar is Blowing Throughout Amish Country

I was ministering in a small country church, where there were Amish people living in the area. While I was speaking, I sensed that God was doing something regional, bringing His people together corporately for something awesome. To be honest, at the time, I was not thinking about the Amish people, but God was. Later the Lord showed me that as I blew the shofar during worship, His breath was blowing throughout the region, releasing white horses into Amish country.

Amish Buggies on the Highway to Glory!

Amish buggies will no longer take the back country roads for travel, but will now take their place on the “spiritual” beltways. On the way to this small church in Pennsylvania, a friend who knew the area cautioned me to drive carefully, because Amish buggies drawn by horses would be using the same road. (Some Amish people have been injured and even killed by cars running into them.) Since the speed of the buggies is slow, they are not easily seen as you drive over the top of a hill, or as they are slowly coming onto the road from an intersection. As we arrived at the church, a buggy with an Amish family was passing by the church. The clicking sound of trotting horse hoofs blessed us as we entered through the church doors.

I sense the Lord cautioning us who believe, that He is pouring out His Spirit on all flesh, to “walk softly” in Amish country. Many Amish people will now begin to come onto the same “spiritual” road we are on. I sense the Lord saying, “They may appear slow and behind the times in certain areas, but to Me, they are coming onto My Highway right on time!”

Angels are Being Released to Bring in a Bountiful Harvest…Here Come the Amish!

I am seeing angels descending upon the fields and barns of the Amish people. Barns are the places where the Amish often gather to worship. I see their barns overflowing with the fatness of a great harvest of souls, full of the Holy Spirit coming into the Kingdom of God. Their barns shall be called “Glory Barns” with “24/7” worship breaking out. The Lord is coming to set their harvest fields on fire.

“There remaineth therefore a rest to the people of God. For he that is entered into His rest, he also hath ceased from his own works, as God did from His. Let us labor therefore to enter into that rest, lest any man fall after the same example of unbelief.” (Hebrews 4:9-11)
Jesus was in their fields of labor, working right among these precious Amish people, to bring them into a harvest of “spiritual” resting in Him, who had finished the redemptive work before the foundation of the world. Because of their tradition of hard work ethics, the Lord will use many of the Amish people as they keep their hand to the “spiritual” plow, and enter into His rest, and other fields of His labor.

Amish women were mending torn pieces of cloth together from various denominations, races, and nationalities, knitting “prophetic” quilts of unity. Many people looking from underneath these unfinished prophetic quilts, couldn’t make any sense out of the design or see any beauty in it. But the Lord was proclaiming: “I see the quilt from above as though it’s already finished, and it’s awesome to Me. I make all things beautiful in My time.”

Next time you pass through Amish country, you may want to take a buggy ride…on the King’s carriage.

Bill Yount has been a member of Bridge of Life Church in Hagerstown, Maryland for the past 40 years where he is in leadership. He faithfully served in Prison Ministry at Mount Hope Inc. for 23 years and now travels full-time, ministering in churches and Aglow circles. He is currently an Advisor at Large for Aglow International and is also a member of the Apostolic Company of Alliance International Ministries. Bill’s calling is to encourage the Body of Christ to move forward into God’s destiny as they are sent into the harvest field. “Humility and Humor” characterize his ministry as he brings forth a fresh word that is “in season” proclaiming the Word of the Lord!

The shofar or (ram’s horn) is at times used in his meetings, breaking the powers of darkness over regions, churches, and households. The shofar represents God’s breath blowing into the nostrils of His people, reviving them and awakening the lost as he travels across the U.S. Many of God’s messages which Bill ministers prophetically, come out of everyday life with his family and friends. Bill is also a member of the Apostolic Company of Alliance International Ministries.