Vice President Mike Pence delivers the keynote address at Liberty University’s 46th Commencement ceremony Saturday in Lynchburg, Va. (Screenshot courtesy: Liberty University/Facebook)
VP Mike Pence to Liberty University Grads: ‘Prepare Your Lives for Action, Love God and Your Neighbor at the Same Time’
05-11-2019
CBN News Steve Warren
Love For His People Editor’s Note: Congrats to our niece, Madison Martin Cowell, who was among the graduating class of 2019!!!  We love you, Madi! Uncle Steve and Aunt Laurie
Delivering the keynote address at Liberty University’s 46th Commencement ceremony Saturday, Vice President Mike Pence told graduates they graduated at the right time due to President Donald Trump’s growing economy.
“They say timing is everything. The class of 2019, I just want to tell you — you picked a great time to graduate. Because after two years of the leadership of President Donald Trump, jobs are coming back and America is back,” the Vice President said to a round of thunderous applause and cheers. “You are entering a growing American economy.”
An audience of more than 45,000 attended the ceremony held at the school’s Arthur L. Williams Stadium and thousands more watched the event online.
Related ‘He Knows Better’: Mike Pence Responds to Pete Buttigieg’s Criticism of His Faith More than 8,000 graduates took part in the ceremony. It was the largest graduating class in the university’s history. The oldest graduate this year is 87 years old. The youngest is 17, according to the school.
Pence also spoke about the work the administration has been doing to advance the principles and values the university teaches.
“We’ve been rebuilding our military. Standing with our allies and standing up to our enemies. And under this administration, if the world knows nothing else, the world knows this: America stands with Israel,” Pence noted.
The Vice President also told graduates what kind of America they are entering as new members of the workforce.
“You are entering an America where you have a president and an administration that’s standing strong for all of the liberties we cherish. Freedom of speech. The freedom of religion. And we stand without apology for the sanctity of human life,” Pence said.
Recalling the night he put his faith in Jesus Christ as his Lord an personal Savior, Pence also challenged the graduating class to live their faith.
“So I say not so much as your vice president, but as a brother in Christ. If what you’ve seen and heard and learned in this place has also taken hold in your hearts, go from here and live it out,” he said. “Share it. Because America needs men and women of integrity and faith now more than ever.
The Vice President said his main message to the Class of 2019 was derived from “the moment we are living in today.”
“Throughout most of American history, it’s been pretty easy to call yourself Christian,” he said. “It didn’t occur to people you might be shunned or ridiculed for defending the teachings of the Bible. But things are different now.”
“Some of the loudest voices for tolerance today have little tolerance for traditional Christian beliefs,” Pence continued. “So as you go about your daily life, just be ready. Because you’re going to be asked not just to tolerate things that violate your faith, you’re going to be asked to endorse them. You’re going to be asked to bow down to the idols of popular culture.”
“So you need to prepare your minds for action, men and women,” the vice president warned.  “You need to show that we can love God and our neighbor at the same time through words and deeds.”
“Men and women of Liberty University Class of 2019, as you strive for greatness, know that you will face challenges. You’ll face opposition,” Pence noted. “But just know this. If like Shadrach, Meshach, and Abednego, you end up in the fire, there’ll be another in the fire.”
The Vice President also told the graduating class to stand firm, put into practice all of the things they learned at Liberty, to never give up and to always be prepared to give a reason for the hope that they have and that they’ll do it with gentleness and respect.
“Because our nation and our world need that message of grace and love more now that ever before,” he said.
“America has always been a nation of faith. As you strengthen your foundation of faith among the American people, you will be strengthening the foundation of America itself,” the Vice President continued.
Pence told graduates to “have faith in themselves. Proven by what you’ve accomplished to get you to this very day.”
“Have faith in the ideals and the principles you have learned here.  And have faith that he who brought you this far will never leave you or forsake you because he never will,” he said.
“And never forget — where the spirit of the Lord is, there’s liberty,” the Vice President concluded.
Pence’s visit marked the second time the former Indiana governor has spoken at Liberty University and the first as vice president. In 2016, he spoke at convocation as a Republican vice presidential candidate a few weeks before Election Day.
President Donald Trump delivered Liberty’s 2017 commencement address and former President Jimmy Carter was the featured speaker last year.
Before the Vice President delivered his address, Jerry Falwell, president of the Lynchburg, Va., – based Christian university, acting on behalf of the board of regents bestowed on Pence a doctor of law degree.
Before Pence’s day began, he posted a message to social media on how thrilled he and Mrs. Pence were to be in Lynchburg.
“@SecondLady & I are thrilled to be in Lynchburg, VA! This morning I’ll deliver the commencement at @LibertyU. They say timing is everything… & Class of 2019, picked a great time to graduate. Under @POTUS’ leadership, confidence is back, jobs are coming back – & America is back,” he wrote. 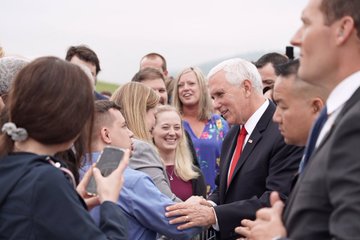 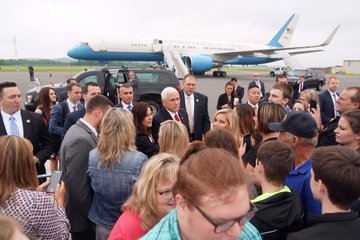 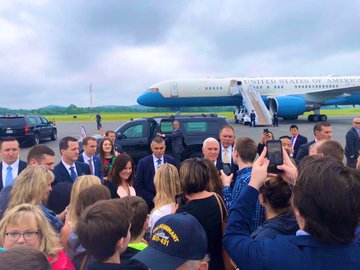 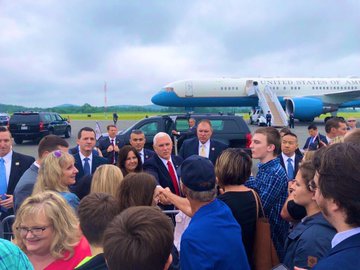 @VP
.@SecondLady & I are thrilled to be in Lynchburg, VA! This morning I’ll deliver the commencement at @LibertyU. They say timing is everything… & Class of 2019, picked a great time to graduate. Under @POTUS’ leadership, confidence is back, jobs are coming back – & America is back!

‘He Knows Better’: Mike Pence Responds to Pete Buttigieg’s Criticism of His Faith