Star Actress Shares Her Own ‘Unplanned Story’
04-08-2019
CBN News Christian Ellis
The pro-life movie “Unplanned” finished in the top 10 at the box office for the second weekend in a row, overcoming an “R” rating and what the film’s supporters have called a media blackout.
Now, media outlets are calling the movie’s success a surprise. “Unplanned”  – which is centered on the life of former Planned Parenthood Director Abby Johnson –brought in $3.2 million on its second weekend after 471 more theaters added the film to their showings. The movie made $6,110,000 when it debuted last weekend.
So far, it’s earned more than $12 million, doubling the $6 million production budget.
Related Johnson is rejoicing at the increased attention the movie is bringing to the pro-life movement. “Unplanned is a train that can’t be stopped!!!” she tweeted. “In the @nypost today!! #unplannedmovie.”
View image on Twitter 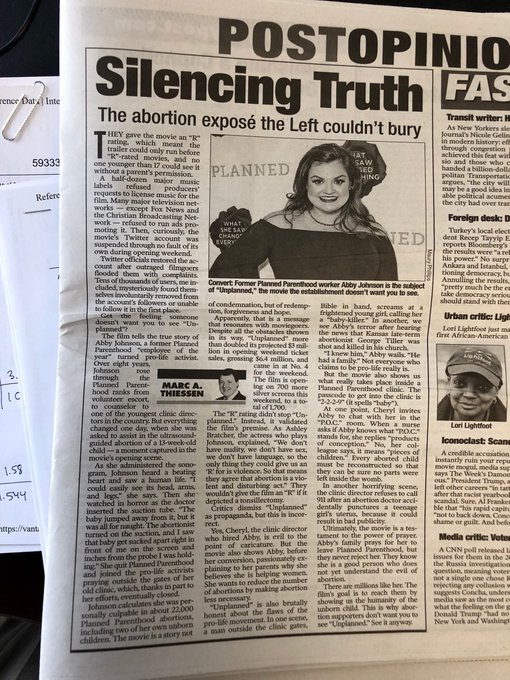 Abby Johnson@AbbyJohnson
Unplanned is a train that can’t be stopped!!! In the @nypost today!! #unplannedmovie

2,239 people are talking about this
Twitter Ads info and privacy
As CBN News has reported, the film depicts Johnson’s emotional decision to quit her Planned Parenthood job after watching an ultrasound-guided abortion.
“It’s a little surreal, if I’m honest, to watch someone play out the worst version of yourself in a film,” Johnson told CBN News during an interview on the set of the film.
“But it’s also just a good reminder that God can literally use anything from our past and use it for His glory and use it for His kingdom,” she added.
Ashley Bratcher, who played Johnson in the movie, has shared her own “unplanned” story on Instagram. In a picture with her nine-year-old son, she writes that she used to be “a very young, struggling, unwed, jobless mother.”
“My unplanned baby turned nine just a few weeks ago,” she wrote. “My high school sweetheart and I could barely make ends meet when he was born. I was on Medicaid and WIC and it wasn’t uncommon to see our bank account in the red. Was it hard? Absolutely.”
“But the best things in life are worth fighting for and this little man has taught my husband and I more than any other human,” she added. “Having our son empowered us, it made us better people. We learned to love unconditionally.”
“Today, this little dude is my Star Wars binge watching partner, my Mario Kart compadre, and most importantly my little prayer warrior,” she continued. “He wants to be an architectural engineer, loves science and drawing comics. He continues to teach us so much about life every day. “
“I’m so so so proud of this little human and the incredible boy he is becoming,” she concluded. “As long as my God holds the world in His hands, I know that there’s no such thing as Unplanned.”
Bratcher shared on Twitter that she hopes her own story will encourage other women.
“I was pretty vulnerable this past week in sharing about my own Unplanned pregnancy,” Bratcher tweeted. “I hope that my story will encourage other women and serve as a reminder of how empowering it is to be a mother.”

Ashley Bratcher@_AshleyBratcher
I was pretty vulnerable this past week in sharing about my own Unplanned pregnancy. I hope that my story will encourage other women and serve as a reminder of how empowering it is to be a mother.#MyUnplannedStory @UnplannedMovie
Human Life Action@HumanLifeAction
Actress @_AshleyBratcher Announces #MyUnplannedStory to Empower Women in Unplanned Pregnancies… via @everyday_mamashttp://ow.ly/G42i30ojDwf

456 people are talking about this
Love For His People, Inc. founded in 2010 by Steve & Laurie Martin. Charlotte, NC USA