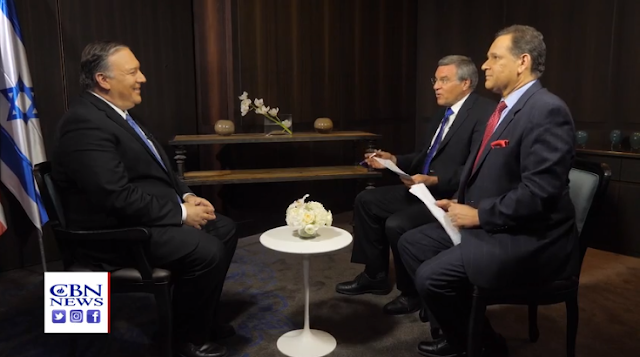 EXCLUSIVE Secretary of State Pompeo to CBN News: God May Have Raised Up Trump Like He Raised Up Queen Esther

03-21-2019
CBN News Emily Jones
JERUSALEM – US Secretary of State Mike Pompeo tells CBN News he believes God may be using President Donald Trump to help defend the Jewish state of Israel.
Chief Political Analyst David Brody – who has been traveling with the secretary on his tour of the region – and Middle East Bureau Chief Chris Mitchell sat down with Pompeo Thursday to talk about the Trump administration’s support for its regional allies and security goals for the region.
“As a Christian to go to the place that is so fundamental to things you believe is just a very special thing,” Pompeo said.
Related ‘The United States Intends to Remain’ in Syria: Pompeo Says US Will Continue Fighting Islamic Terror in Mideast Why Pompeo Says Trump Is a Possible Queen Esther, Poised to Defend Israel The secretary’s visit lined up with Purim, a time when Jews around the world celebrate the courage of Queen Esther and her role in saving Israel from utter destruction.
CBN News asked Pompeo if he believes Trump could be a modern-day Esther by helping defend Israel from threats like Iran. “As a Christian, I certainly believe that’s possible,” he replied. “It’s remarkable. So, we were down in the tunnels where we could see 3,000 years ago and 2,000 years ago, if I have the history just right. To see the remarkable history of the faith in this place and the work that our administration has done to make sure that this democracy in the Middle East, this Jewish state remains – I am confident that the Lord is at work here.”

BELOW: Why Secretary of State Mike Pompeo Says Trump Is a Possible Queen Esther, Poised to Defend Israel

President Trump has supported Israel since the beginning of his campaign for the presidency. He defied international law Thursday by formally recognizing Israel’s sovereignty over the Golan Heights, a move that distinguishes the United States from the international community.
Last year, evangelicals and Israelis celebrated Trump’s decision to move the US embassyfrom Tel Aviv to Jerusalem. However, some are concerned about Trump’s upcoming peace plan.
Pompeo told CBN News the US wants the deal to improve the entire region.
“So, I’ve seen the details of the plan as it stands now. I’m sure there will be things moved a bit as time goes on,” he said. “We all want a better life for the Palestinian people. We want a better path where the Israelis and Palestinians aren’t in conflict. That would be good for the region, good for Jerusalem, good for the world. And I think this plan presents a vision for that but doesn’t sacrifice any of these core principles frankly of any of the faiths.”
BELOW: Pompeo to CBN News: Mideast Peace Plan Won’t ‘Sacrifice Core Principles’ of Jews, Christians, or Muslims
After arriving in Israel Wednesday, Pompeo met with Israeli Prime Minister Benjamin Netanyahu. In a joint press conference, the Secretary of State vowed to fight anti-Semitism. “With the dark wave of anti-Semitism rising in Europe and the United States, all nations must go the barricades against bigotry. Our challenge is especially urgent as the hot rhetoric of prejudice cloaks itself in the language of the academy or of diplomacy or public policy,” he said.
In his interview with CBN News, the secretary also hit back at the growing problem of anti-Semitism around the world, and even in the US Congress.
BELOW: Pompeo Calls Out Rep. Ilhan Omar by Name, Calls Her Anti-Semitic Comments ‘Just Abhorrent’
Pompeo also touched on Syria and said the United States intends to remain in the war-torn country to keep the Islamic State from regaining control.
BELOW: ‘The United States Intends to Remain’ in Syria: Pompeo Says US Will Continue Fighting Islamic Terror in Mideast
The next stop on the secretary’s Middle East tour is Lebanon, where he will urge leaders to fight Hezbollah’s terror tactics.
Netanyahu is also set for an upcoming trip and will be coming back to Washington in a few days to meet with President Trump.
According to a statement released by the White House, Trump will welcome Netanyahu to the White House next Monday and Tuesday, March 25 – 26.
The president and the prime minister will discuss their countries’ shared interests and actions in the Middle East during a working meeting on March 25.  The President will also host the Prime Minister for dinner on March 26, the statement said.

‘The United States Intends to Remain’ in Syria: Pompeo Says US Will Continue Fighting Islamic Terror in Mideast

Why Pompeo Says Trump Is a Possible Queen Esther, Poised to Defend Israel