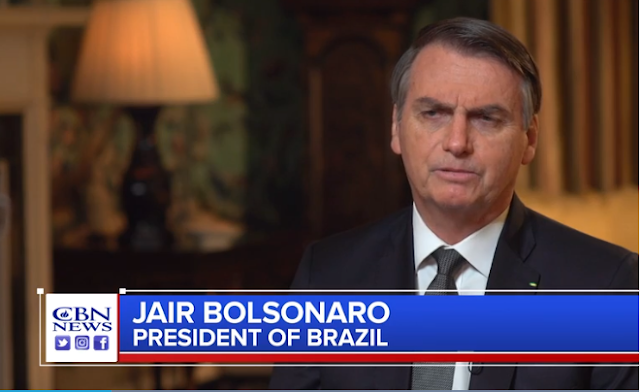 God-Fearing Men’: Brazil’s President is a Friend to President Trump and Biblical Values

EXCLUSIVE INTERVIEW ‘We Are God-Fearing Men’: Brazil’s President is a Friend to President Trump and Biblical Values

03-20-2019
CBN News George Thomas
WASHINGTON – Brazilian President Jair Bolsonaro came to America to tell President Donald Trump he not only admires him but is also a friend of the United States.
“It is time to overcome old resistances and explore the very best potential between Brazil and the United States. After all, it is fair to say that today, Brazil does have a president who is not anti-American,” Bolsonaro said during a press conference in the Rose Garden Tuesday. ‘Lord, Uphold Him. Protect Him From Evil’: CBN’s Pat Robertson Prays for Brazilian President Bolsonaro at Meeting with Evangelical Leaders Brazilian President Bolsonaro to CBN News: ‘I Believe in the Word of God’ During a two hour meeting at the White House, the two leaders signed agreements and discussed how to work together to end the upheaval in Venezuela.
President Trump said Bolsonaro’s historic election win marked a new day in Brazil and a new era of friendship with the United States.
“I want to congratulate you again on your tremendous election victory last October. It was an incredible feat and really a truly incredible challenge and the end result was something the whole world was talking about,” Trump said.
By all accounts, Bolsonaro’s inauguration as Brazil’s 38th president was a significant milestone in the world’s 5th largest country.
After years of leftist rule, the 63-year-old former paratrooper-turned politician is the first conservative president in Brazil’s democratic era.
“My campaign didn’t have a lot of money; almost all the media in Brazil were against us, so it was a huge miracle that we won,” said Bolsonaro.
Just 78 days into his presidency, Bolsonaro is already shaking-up Brazil’s political establishment.
Unlike previous administrations that pursued an aggressive anti-American and anti-Israel foreign policy, Bolsonaro is pushing for stronger ties with the United States and Israel, even announcing shortly after winning the presidency that he intends to move his country’s embassy from Tel Aviv to Jerusalem.”
Following his meeting with President Trump, Bolsonaro sat down for an exclusive interview with CBN News at Blair House, located steps from the White House.

Blair House is used for visiting dignitaries and foreign heads of state.
Bolsonaro told CBN why moving Brazil’s embassy from Tel Aviv to Jerusalem is so important.
“Each country has the right to decide where its own capital is, and the capital of Israel became Jerusalem, therefore we are studying the possibility of making that decision at the right time. When Trump took over, it took him almost 9 months to make that decision, I’m now in my third month,” the president said.

Bolsonaro is often referred to as the Trump of the Tropics.
Like President Trump, Bolsonaro believes the mainstream media is fiercely opposed to his presidency and agenda. Bolsonaro also regularly uses social media to connect directly with his supporters.
“To a large extent, I support what Trump does; He wants to make America great, I also want to make Brazil great. I also have concerns about the indiscriminate entrance of foreigners without any criteria. But beyond this, we are both Christians and we are God-fearing men,” he explained.
Bolsonaro’s middle name is “Messias”, Portuguese for “Messiah”.  He’s a Catholic and his wife, Michelle, is a protestant evangelical who attends a Baptist church.
An assassination attempt by a knife-wielding attacker a month before the election almost cost Bolsonaro his life. He says it is nothing short of a miracle that he’s alive today.
“Doctors who attended to me said that for every 100 stabbings of the kind I endured, only one person survives. So, I am a survivor and owe my life to God. It is was His will for me to live.”
The attack became a turning point in his campaign as the populist candidate went on to win, promising to tackle Brazil’s rampant corruption and violence. Two months into his presidency, Bolsonaro is shaking Brazil’s political world, even standing up to dictators like Venezuela’s Nicolas Maduro.
Both Bolsonaro and Trump refused to say whether military plans where on the table to intervene in Venezuela.
“I discussed this matter with Trump and obviously that conversation will remain private. Trump says all possibilities are on the table, and I in large support decisions of the American government.”
Bolsonaro has surrounded himself with well-known Brazilian evangelicals, like pastor Silas Malafaia, who regularly visits and prays with Bolsonaro. Malafaia told CBN Newsthat he believes Bolsonaro is God’s chosen man to lead Brazil.
“Even though Bolsonaro is not an evangelical, he always defends the principles that we evangelicals have defended namely: he is against abortion, he is against the privileges of the LGBTQ movement, he recognizes the greatness and importance of Israel, defends the family and wants to fight corruption and restore our economic,” said Malafaia.
On his first official day as president, Bolsonaro promised to make Judeo-Christian principles a top priority in his administration.
It’s a promise that stands in the face of decades of leftist rule in Brazil.
“The ideology of the left has taken over the universities and also the journalists of Brazil. The impact has been the worst possible, and one of the main goals is to erode family values,” said Bolsonaro.
It was this kind of message that drove the majority of Brazil’s evangelicals to support Bolsonaro.
“The evangelicals of Brazil are equivalent to a third of the population and are growing. I had massive support from them because until recently they had no one to support who shared their values and faith.”
BELOW Brazilian President Jair Bolsonaro to CBN News: ‘I Had Massive Support of the Evangelicals in Brazil’
Bolsonaro’s motto is “Brazil above everything, God above all.” He believes it is a powerful statement about the importance of truth in politics.
“I have been a congressman for 28 years and I saw that in politics the truth almost never existed, and my feeling is that our people are thirsty to know the truth,” he explained.
His favorite Bible verse is John 8:32, “Then you will know the truth and the truth will set you free.”
“Just like in a marriage between a man and a woman, if you don’t have truth, the marriage ends quickly. In politics, if you don’t have truth the government ends quickly,” said Bolsonaro.
After the interview, President Bolsonaro met with a group of prominent American evangelical leaders. Among them, the Christian Broadcasting Network’s Dr. Pat Robertson and Gordon Robertson and evangelist Reinhard Bonnke.

The American delegation prayed for Bolsonaro and promised to stand with his administration as he fights to protect Brazil’s Christian heritage and family values. They also pledged to help Brazil provide humanitarian relief for those suffering in Venezuela.

When asked why this meeting is important, Bolsonaro said, “I recognize the work evangelicals do in my country, which is no different to what they do around the world — sharing the Word of God and strengthening family values.”
BELOW Brazilian President Bolsonaro to CBN News: ‘I Believe in the Word of God’
Watch interview: Brazilian President
Love For His People, Inc. founded in 2010 by Steve & Laurie Martin. Charlotte, NC USA