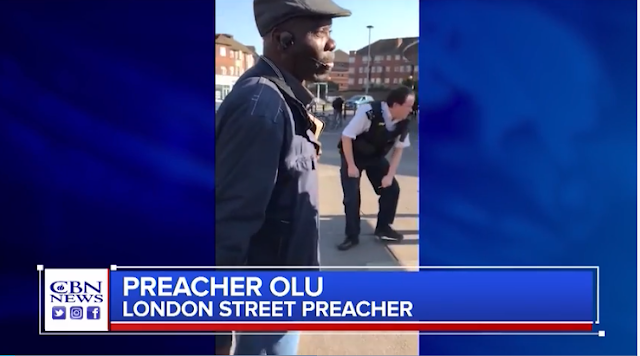 ‘They Arrested Him for Islamophobia’: Muslim Targets Street Preacher, Police Arrest the Christian

03-01-2019
CBN News Dale Hurd
LONDON — Britain was once the home of world missions. But today, it’s increasingly hostile to the gospel. In the latest episode, London police are under fire for arresting an elderly Nigerian man for preaching on the streets of London.
His name is Preacher Olu and he was arrested last Saturday, accused of breaching the peace and Islamophobia. Phone video of his arrest went worldwide on social media.
“You can arrest me if you want to. You can arrest me if you want to,” the preacher says after police tell him to stop talking about Jesus.
Related Cathedral that Once Burned Bibles Calls Cops on Bible-Reading Man: ‘Sermon on the Mount’ Not Allowed CBN News got an exclusive interview with the woman who shot the video, Ambrosine Shitrit.
“A man with a hoodie was trying to humiliate, to be aggressive towards this Christian street preacher,” Ambrosine says. “I could see that he was a Muslim man because he was talking about. ‘No. Allah is the right way’.”
But London police didn’t arrest the Muslim man for threatening a Christian preacher — instead, they arrested Preacher Olu.
Britain is officially a Christian nation, but if you’re street preaching and someone complains, police are quick to move in.
“You better make your life right with the Lord Jesus Christ,” Olu was preaching as the police came up to him.
“What are you doing here?” an officer asks.
“I am preaching,” Olu responds.
“You’re preaching. I am going to require you to go away,” he says.
“You can never,” Olu replies.
“Okay then I will arrest you for breach of peace,” the officer says.
“What breach of peace?” Olu asks.
“What you’re doing. You’re causing problems, you’re disturbing people’s day and you’re breaching their peace,” the officer says.
But Ambrosine says Olu was not disturbing anyone except the Muslim man.
“Nobody was offended by the preaching, nobody. Nobody was offended and nobody came to see what was happening,” she recalls.
Andrea Williams of the Christian Legal Centre is advising Preacher Olu of his legal rights.
“This was completely an overreach of their authority. There was no basis upon which to arrest the pastor although they did know clearly because it’s caught on the camera. There was no proper investigation.  They arrested him for Islamophobia which isn’t an offense and certainly there was no evidence of the fact that he was Islamophobic or racist,” Williams explains.
As Olu declared, “Jesus is the only way,” the officer badgered him saying, “No one wants to listen to that.”
“You will listen when you’re dead,” Olu replies.
Then one of the officers ripped the Bible from his hands.
“Don’t take my Bible away. Don’t take my Bible away,” Olu says.
The Christian preacher was reportedly driven out of the area and in the words of the police, “de-arrested” and dumped in an area without money to get home.
Williams said she’s not sure if Preacher Olu will bring charges against the police. She says she sees cases like this on almost a weekly basis.
Watch here: Muslim Targets Christian. They Arrest the Christian.
Did you know?
God is everywhere—even in the news. That’s why we view every news story through the lens of faith. We are committed to delivering quality independent Christian journalism you can trust. But it takes a lot of hard work, time, and money to do what we do. Help us continue to be a voice for truth in the media by supporting CBN News for as little as $1.