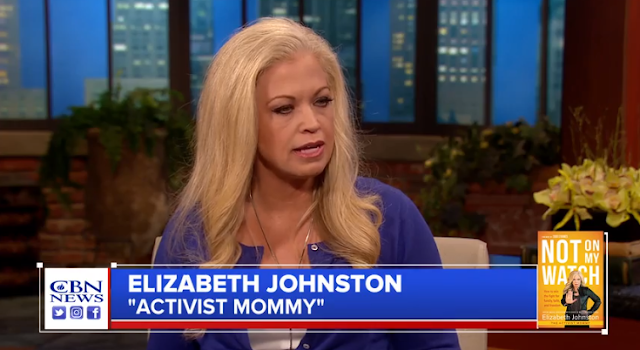 ABOVE: The “Activist Mommy,” Elizabeth Johnston, talks with Pat Robertson about her new book,
Not On My Watch, on Tuesday’s 700 Club.
‘Not On My Watch’: Activist Mommy Fights
for Family, Faith, and Freedom
02-18-2019
CBN News
Elizabeth Johnston, known as the Activist Mommy to her millions of online followers, has amassed over 70 million video views on social media while speaking passionately on controversial cultural issues.
Her new book, Not On My Watch: How to Win the Fight for Family, Faith, and Freedom– written in her characteristically no-nonsense style – is meant to equip Christian moms, dads, grandparents and Millennials to tackle the current cultural issues of natural marriage, free speech, the sexualization of children, abortion, and gender erasure.
Related “If you are tired of your values being trampled, then you must tread beyond your home and the four walls of the church to impact your culture for God,” says Elizabeth. “Our nation suffers from an open wound called sin, and God wants to use us to bring healing. May a movement of men and women shake off the fear of man and rise to the great task of preserving our nation and rescuing future generations.” 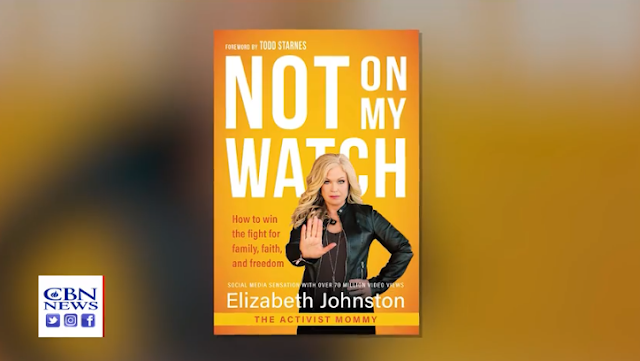 From the mom who exposed Teen Vogue and launched the global Sex Ed Sit-Out movement comes a page-turner that is sure to convict and inspire like no other. As a mother who has made Christian activism a calling for her life and her family, Johnston courageously defends the timeless truths of God’s Word throughout Not on My Watch.
She exposes a growing trend in schools where teachers are telling students that they can be whatever gender they feel like. “It’s a perfectly normal, healthy option they say,” she tells CBN. “They are absolutely wreaking confusion and havoc on this generation. They are radical cultural Marxists who have every intention of changing the fabric of our nation and ensuring that our children do not hold our values. That is why I’m a huge homeschool advocate.” 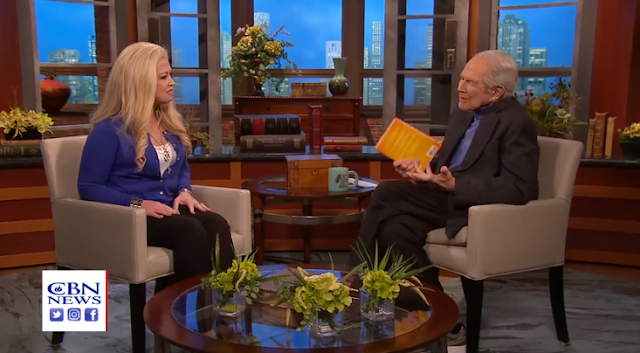 Now Johnston tells CBN Founder Pat Robertson about her latest cause – to battle the horror of New York state’s radical new abortion law through prayer and repentance at nationwide rallies this weekend.
“This Saturday, the day of mourning is being held across this nation. We are calling America to repent over the 46 years of bloodshed. We are asking Americans to wear black, to not shop, to close down your businesses for the day, and to repent for the sin of abortion,” she tells CBN. “You know the Benham Brothers. We have them speaking. Black conservative David J. Harris will be speaking. We’re holding a huge flagship rally that’s already sold out, in Albany, New York, right in the epicenter of where Governor Cuomo signed and celebrated that outrageous, infanticide law.”
“We’re gonna be right there, in the convention center underneath the state house where they signed that law,” she said. “And we are owning this sin, even as God’s people, if you’ve never committed an abortion, there’s a sense in which we have been completely complicit, completely silent, we have not been the Good Samaritan that we must be, and so we have to own this as God’s people for allowing this bloodshed for 46 years. And we’re gonna get on our faces before God, thousands of people, and repent for the sin of abortion.”
Johnston is an activist vlogger who educates and inspires the public on the burning social and moral issues of the day that are important to families. She and her husband, Patrick, who is a medical doctor, author, and movie producer, have been pro-life ministry leaders for many years and home educators to their ten beautiful children.
The growing threat to America’s children and the vicious attack on religious liberty is what dynamited Elizabeth out of her comfort zone to inspire a nation of belittled conservatives and Christians to “come out of their closets” and boldly take their country back. Elizabeth triggers the Left by confronting the lies of abortion, feminism, Islam, and the homosexual agenda with wit and snark as only she can, and she regularly posts viral commentary videos, which have netted over 70 million views. 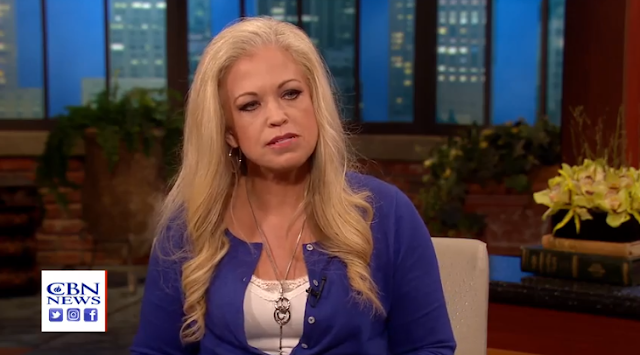 Elizabeth has been featured on many major media outlets, such as Fox & Friends, the New York Times, TheBlaze, and the Christian Broadcasting Network (CBN), as she has become a thought leader on topics of importance to families. The pulse behind all her activism and cultural commentary is her love for her family and her Savior, Jesus Christ.
Love For His People, Inc. founded in 2010 by Steve & Laurie Martin. Charlotte, NC USA