Native American activist Nathan Phillips walks into group of students. (Photo: Screen capture)
UNHINGED: After Fake Reports Fuel Leftist Threats of Death and Violence to Teen Boys, Catholic School Closes
01-22-2019
CBN News Benjamin Gill
Some of the threats are too vile to repeat, but the teenage boys who were falsely accused of targeting a Native American demonstrator in Washington, DC have faced a massive wave of extremist, left-wing attacks. The mob of ranting, unhinged social media users has leveled threats of death and violence while others have been trying to have the boys’ parents fired from their jobs.
So Covington Catholic High School is closed today for the safety of the students and their families. “Please continue to keep the Covington Catholic Community in your prayers,” the principal says.
Two of the Covington students are speaking out about all the hate-filled backlash they, their classmates, and families have received. More about that in a minute.
Related But first, it turns out the media didn’t seek out all the facts in their rush to attack the boys. Additional videos of the incident reveal the boys were standing in front of the Lincoln Memorial after the March for Life, waiting for their bus to take them home to Kentucky. The boys were being taunted and attacked verbally by a group called the Black Hebrew Israelites who were shouting insults like “white crackers” and “incest kids.” So the boys started chanting school spirit cheers.
That’s when a group of marching Native Americans came upon the scene. Nathan Phillips, an elderly leader from the group, then decided to wade into the middle of the crowd of teens while playing a drum and singing. Phillips says he wanted to bring peace, but video shows him singling out one of the boys, Nick Sandmann, who just stood there smiling while the man sang and banged the drum right in his face. Members of the Native American group then told the media that the boys had blocked the elderly man’s path and were taunting him, but the videos tell a different story. 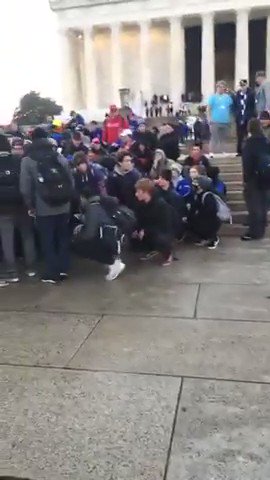 11.9K people are talking about this
Twitter Ads info and privacy
Meanwhile, the Cincinnati Enquirer reports that Phillips is continuing to stoke the flames by accusing Sandmann of not accepting responsibility for the incident. Phillips is refusing an invitation to sit down to a peaceful dinner with the students.
“I’m disappointed with his statement. He didn’t accept any responsibility. That lack of responsibility, I don’t accept it,” Phillips told the paper.
Sandmann said in his statement, “The protester everyone has seen in the video began playing his drum as he waded into the crowd, which parted for him. I did not see anyone try to block his path,” Sandmann wrote. “He locked eyes with me and approached me, coming within inches of my face. He played his drum the entire time he was in my face.”
“To be honest, I was startled and confused as to why he had approached me,” Sandmann said. He says he “believed that by remaining motionless and calm, I was helping defuse the situation.”
Sandmann says he was “not intentionally making faces at the protestor. I did smile at one point because I wanted him to know that I was not going to become angry, intimidated or be provoked into a larger confrontation.”
Now Covington students, identified only as Sam and Grant, have posted a video to YouTube to tell their side of the story and to show how out-of-control and dangerous the aftermath has become.
“Several media platforms blatantly lied about the events regarding the controversy in DC, and it has affected us as a community and individuals greatly. There have been many threats against our lives against our parents. Some of these threats include we should all be locked in the school and burnt to the ground, the school should be bombed, school shooting threats. It’s really scary. A lot of people are scared to go to school tomorrow because of what could happen,” they say.
The media-fueled frenzy of misinformation and hate all started after an edited video was posted of Covington student Sandmann standing in front of Native American activist Phillips.
Both say they were just trying to “defuse” a situation between their groups and the Black Hebrew Israelite movement, whom Phillips has since compared to the racist, hate-filled group called the Westboro Baptists.
The clip went viral and created a firestorm with many in the media and Hollywood attacking the students for allegedly harassing Phillips before more videos were released showing the bigger picture.
As Sam and Grant said, serious threats have been made against the students, the school and their families, so police are investigating and their school has been temporarily closed. Authorities are taking the threats seriously.
President Trump has even weighed in after more details came out about the incident, tweeting in part, the “students were treated unfairly with early judgments proving out to be false – smeared by media.”

@realDonaldTrump
Looking like Nick Sandman & Covington Catholic students were treated unfairly with early judgements proving out to be false – smeared by media. Not good, but making big comeback! “New footage shows that media was wrong about teen’s encounter with Native American” @TuckerCarlson

82.6K people are talking about this

@realDonaldTrump
Nick Sandmann and the students of Covington have become symbols of Fake News and how evil it can be. They have captivated the attention of the world, and I know they will use it for the good – maybe even to bring people together. It started off unpleasant, but can end in a dream!

54.1K people are talking about this