Rep. Ilhan Omar (D-Minnesota) PHOTO CREDIT: Patrick Robertson
Muslim Congresswoman Who Said Israel ‘Hypnotized the World’ Now Sits on Powerful
Foreign Affairs Panel
01-18-2019
CBN News Emily Jones
JERUSALEM, Israel – Ilhan Omar, a newly elected Democratic lawmaker from Minnesota and vocal anti-Israel activist, secured a coveted seat on the House Foreign Affairs Committee Thursday.
Omar’s new position will give her more than an influential platform to criticize Israel, but a vote as well. She will now be able to help craft US foreign policy towards the Jewish State.
According to some, this is a big problem for Jews and Israelis who view her criticisms against Israel as pure anti-Semitism.
Related Omar continues to stand behind a statement she made in 2012 that Israel “has hypnotized to the world” from seeing the “evil” things it is doing to the Palestinians.
“May Allah awaken the people and help them see the evil doings of Israel,” she added.

Israel has hypnotized the world, may Allah awaken the people and help them see the evil doings of Israel. #Gaza #Palestine #Israel

17.7K people are talking about this
CNN‘s Poppy Harlow asked Omar about the Tweet Wednesday asking, “I wonder what your message is this morning…to Jewish Americans who find that deeply offensive?”
Omar said she didn’t understand how her attacks against the Jewish state would offend Jews.
“Oh, that’s a really regrettable way of expressing that,” Omar responded. “Um, I, I, don’t know how my comments would be offensive to Jewish Americans. My comments precisely are addressing what was happening during the Gaza war. Um, and I am clearly speaking about the way that the Israeli regime was conducting itself in that war.” 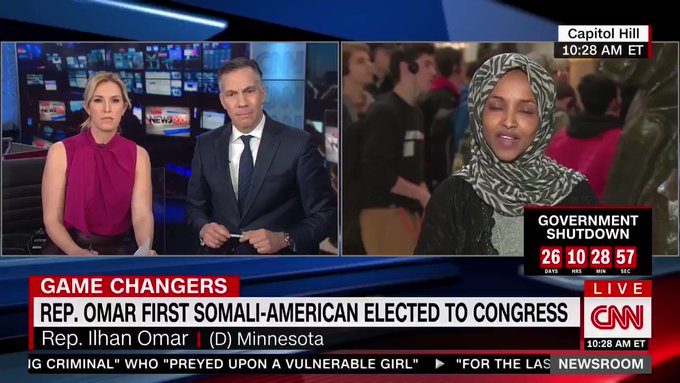 Democrat Rep. Ilhan Omar says she doesn’t know why Jewish Americans would be offended by her anti-Semitic comments. And she also called the Israeli government a “regime” live on CNN.

17 people are talking about this
Twitter Ads info and privacy
Omar is a vocal supporter of boycotts, sanctions, and divestments against Israel.
On her first day in office, she was photographed embracing Muslim Brotherhood sympathizer Linda Sarsour.
Omar announced her assignment by Nancy Pelosi to the Foreign Affairs committee, adding that the committee “oversees all foreign assistance, national security affecting the country’s foreign policy, treaties, peacekeeping and war powers.”
Love For His People, Inc. founded in 2010 by Steve & Laurie Martin. Charlotte, NC USA