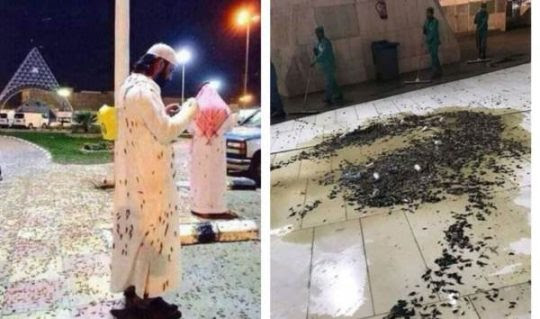 Signs Of The Times? A Plague Of Locusts Hits Mecca And Earth’s Magnetic Pole Is Experiencing A “Sudden Shift”
Posted: 11 Jan 2019 Michael Snyder
Really strange things are starting to happen all over the world.  We’ll talk about “the North Pole’s sudden shift” later in this article, but first I want to focus on the very unusual event which just took place in Mecca, Saudi Arabia.  A “massive swarm” of thousands upon thousands of black locusts descended upon the holiest site in Islam, and video of this “plague” is understandably causing quite a stir all over social media.  The following comes from the Times Of Israel…

A massive swarm of locusts plagued Mecca, Saudi Arabia, earlier this week, prompting authorities at Islam’s holiest site to launch a cleaning operation to remove them.
Videos posted to social media showed the insects swarming around cleaners and worshipers in the city’s Grand Mosque, where millions of Muslim pilgrims congregate every year.

And this was not just a temporary phenomenon.  Once the locusts arrived, they didn’t want to leave, and it is being reported that they were “covering the walls of the mosque”…

A closer-up view shows them swarming in all directions, over the heads of the cleaners in green uniforms attempting to deal with them.
Another shot shows the insects covering the walls of the mosque as they swarmed across the site.

According to Saudi authorities, it took 22 teams consisting of a total of 138 people to clean up the infestation.

Meanwhile, the behavior of our planet is once again making headlines.  According to scientists, the magnetic North Pole is making a “sudden shift” away from Canada and toward Russia…

Deep beneath the Earth’s surface, liquid iron is sloshing around at its core, causing the North Pole to move away from Canada and towards Siberia. This has caused global geomagnetism experts to undergo an urgent update of the World Magnetic Model where it will alter where exactly North Pole is. The next update was not scheduled to happen until 2020, but due to the North Pole’s sudden shift, researchers have to bring it forward.

These days the vast majority of us heavily use GPS to get around, and the rapid movement of the magnetic North Pole is causing serious navigation errors…

Precision of where the North Pole is needed for GPS across the globe, and currently is close to exceeding “the acceptable (safe) limit for navigational errors,” the journal Nature reports.
Arnaud Chulliat, a geomagnetist at the University of Colorado Boulder and the National Oceanic and Atmospheric Administration’s (NOAA’s) National Centers for Environmental Information, said: “The error is increasing all the time.
“The fact that the pole is going fast makes this region more prone to large errors.”

In essence, GPS is losing its GPS.

Of course the magnetic North Pole has always been moving a little bit, but in recent years that movement has been greatly accelerating…

But the movement of the north magnetic pole has been the object of study since 1831. Initially, it was tracked moving into the Arctic Ocean at a rate of about 15km each year. But, since the mid 1990s, it has picked up speed.
It’s now shifting at a rate of about 55km a year.

At the same time, Earth’s magnetic field has been getting weaker and weaker, and this has many experts deeply concerned that we could soon experience a catastrophic pole flip.  The following comes from one of my previous articles…

The Earth’s magnetic field is steadily getting weaker, and scientists are warning that it could soon flip. If that happens, it will be a cataclysmic event beyond anything that we have ever experienced before. Of course most people never even give much thought to the giant magnetic field that surrounds our planet, but without it modern society would simply not be possible. The magnetic field provides protection for the electrical grid which powers our homes, our businesses, our hospitals, our stores, our banks, our computers and our televisions. It is essentially an enormous “force field” that protects our world from solar storms and cosmic radiation. Right now we take that protection for granted, but scientists tell us that Earth’s magnetic field has flipped before, and that it could soon happen again.

Basically, we are talking about an event that would be even worse than a direct hit from a massive electromagnetic pulse from the sun.

If a sudden pole flip happened today, electronic devices all over the world would be crippled, and scientists tell us that we would be facing “trillions of dollars in damage”…

According to a team of international scientists, including from the Australian National University (ANU), such an event in the future would increase our planet’s exposure to the Sun’s radiation, and could cause trillions of dollars in damage by decimating power and communications systems across the globe.

We truly live in apocalyptic times, although most people still don’t seem to understand what is happening.

Our planet is changing.  Earlier this week I wrote about the fact that Alaska had been hit by 81 significant earthquakes during the first nine days of 2019.  Large quakes are rattling locations all along the Ring of Fire, once dormant volcanoes are going off like firecrackers all over the globe, and the tsunami that just struck Indonesia once again reminded us of how vulnerable we really are to major natural disasters.

Right now the mainstream media in the United States is keenly focused on the government shutdown, but in the grander scheme of things the shutdown is small potatoes compared to some of the other things that are happening.

2019 has gotten off to a very strange start, and I have a feeling that things are about to get a whole lot stranger.

About the author: Michael Snyder is a nationally-syndicated writer, media personality and political activist. He is the author of four books including Get Prepared Now, The Beginning Of The End and Living A Life That Really Matters.  His articles are originally published on The Economic Collapse Blog, End Of The American Dream and The Most Important News.  From there, his articles are republished on dozens of other prominent websites.  If you would like to republish his articles, please feel free to do so.  The more people that see this information the better, and we need to wake more people up while there is still time.

The post Signs Of The Times? A Plague Of Locusts Hits Mecca And Earth’s Magnetic Pole Is Experiencing A “Sudden Shift”appeared first on The Economic Collapse.

Why Don’t We Care About the Slaughter of Nigerian Christians? – MICHAEL BROWN CHARISMA NEWS

Aliyah For His People – upcoming event. July 10-11, 2020. Save with the early registration price now.

02-21-2020 CBN News Eric Philips Now Playing What Will Be the Effects on the US Economy? Beyond the Death Toll,

Let the needy among your people eat – Israel365

“Walk With Me”, Steve Martin – Country church in India – Pastor Lucie, some members, and baby TRUMP!

“Walk With Me”, Steve Martin, to the Taj Mahal world wonder in northern India! (all 6 short video episodes)

There is So Much More by Elaine Tavolacci

Global Crop Failures Continue: In Australia This Is Going To Be The WORST HARVEST Ever Recorded – Michael Snyder