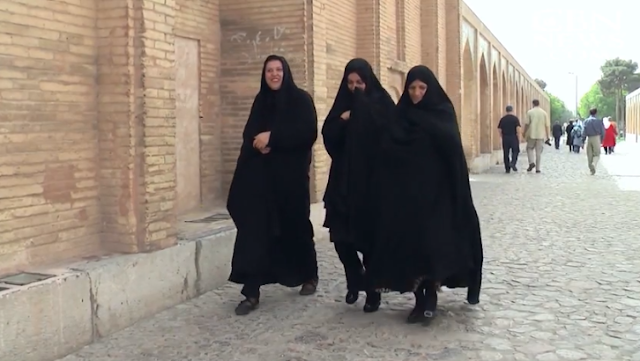 ‘The Stuff of Movies’: A Battered Wife’s Journey
from Islam to Christian Pastor

01-03-2019
CBN News Dale Hurd
STOCKHOLM – No one would have thought a Muslim woman in Iran who was simply trying to stay alive in an abusive marriage in Iran would one day lead two churches in Sweden, bring more than a thousand former Muslims to Christ, and be invited to speak before the Queen of Sweden.
Living in Darkness in Muslim Iran 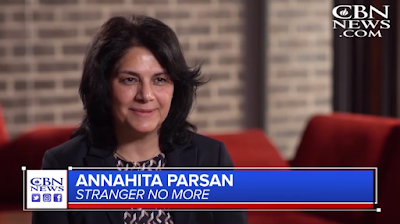 As a young woman in a Muslim culture, Annahita Parsan was powerless and insignificant. Her only hope was that she might one day find a good husband, and she did. But he died suddenly in an accident, and then she found herself trapped in a second marriage so violent, she expected to die.

She told us that during her abuse, “I didn’t know anything. It was darkness. It was a really bad life.”
And although she writes about the abuse in her book, Stranger No More, Parsan doesn’t like to talk about it now. 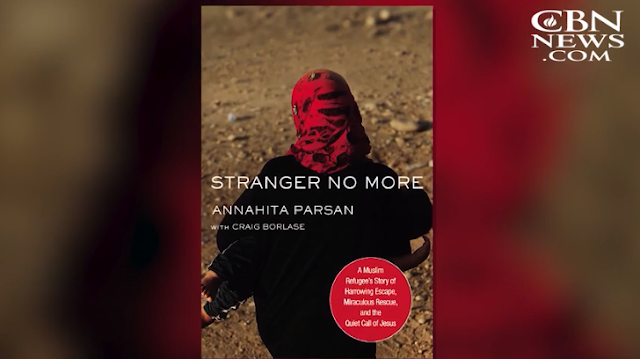 “It’s not that easy speaking about that.”
Beaten with a Shovel and a Suicide Attempt
Parsan admits being beaten with a shovel by her then-husband. As a battered wife, with bruises and cuts all over her body, Parsan eventually tried to kill herself with pills, but she survived.
Her daughter Roksana remembers when her father threatened to slit her throat when she was just a small child.
“We wanted more cookies. Supernormal, and we ran up and we like said, ‘More cookies! More cookies!’ And he came up with a knife, put it to my throat and he said, ‘Ask for cookies again.'”
About her mom, Roksana said, “She was striving to just survive for us, just survive to make a better life for us. And maybe that was something God had implanted in her so that she would have something to hold onto.”
Fleeing Iran Only to Land in a Turkish Prison, Then to Faith in Christ
Annahita Parsan’s journey to Christ and across two continents is the stuff of Hollywood movies, one that would include several brushes with death.

Parsan, her husband and her children fled Iran through the mountains to Turkey in 1984, where she and Roksana faced more danger, before landing in a Turkish prison. They would finally make it to Denmark where she divorced her still-abusive husband, and also heard the gospel for the first time.  Then she moved to Sweden where she and her two children walked into a church and prayed, “We are Christians, from now on.”
Her ‘Beautiful’ Ending: Becoming a Pastor in Sweden
Annahita entered the ministry and has led more than 1,500 Muslims to Christ. She leads two churches and trains other churches how to reach out to and disciple Muslim background believers.  Former Muslims hungry for ‘the God who loves’ fill her church each Sunday. Parsan believes this was foretold in Jeremiah chapter 49, verse 39: “But in the latter days I will restore the fortunes of Elam, declares the Lord.”
“It is about Elam and Elam is Persian,” Parsan said, “And when I read that I know that it’s about us. It’s about all their life and it’s amazing. God told Jeremiah at that time, and it’s happening just now.”
But Muslim immigration has also made Sweden a home for dangerous radicals, and Parsan told us she has received death threats and lives with the knowledge she could be killed.
Parsan said Sweden “…is a free country. But it’s dangerous, too.” She says she sometimes wonders if she will be killed by Islamists in Sweden.

As a young woman living what seemed like a hopeless existence in Iran, Annahita Parsan saw no plan and no purpose in her abusive marriage, only random violence. But God had a plan.

“God loved me and he was in my life from the beginning,” Parsan said. “Sometimes [when reflecting on her life] I think, wow, it’s beautiful.”
Watch interview here: From Islam to Christianity
Did you know?
God is everywhere—even in the news. That’s why we view every news story through the lens of faith. We are committed to delivering quality independent Christian journalism you can trust. But it takes a lot of hard work, time, and money to do what we do. Help us continue to be a voice for truth in the media by supporting CBN News for as little as $1.