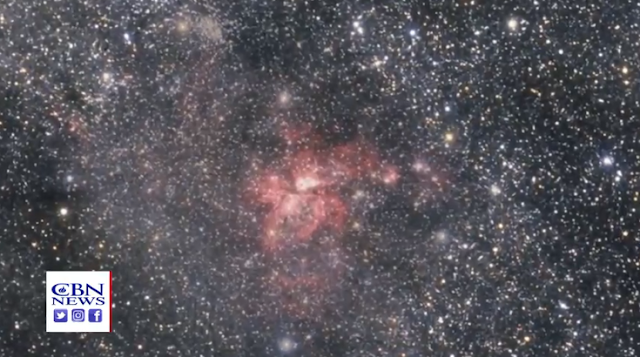 You May Believe in the Baby Jesus, but how about God the Father, Son, and Holy Spirit?

12-20-2018
CBN News Paul Strand
GREENSBORO, NC – Although believers and evidence exist, there remains the question: is there a God? Cold case detective J. Warner Wallace has pursued the question, applying the same procedures he used to solve cold cases.
He started this investigation into God’s existence many years ago as an atheist. But even then, he had to accept something beyond the natural because he already believed the universe had a beginning before space and time.
The Beginning needs a Beginner
Related Cold-Case Investigator Turns to Science to Disprove Christ’s Resurrection, Gets Shocked by the Evidence “It began from nothing. It didn’t exist prior to the Big Bang,” the author of Cold Case Christianity said of the universe. “That means you’re looking for a cause that is non-spatial, non-temporal and non-material because those things are not available until the Big Bang. So you’re already looking for something that’s extra-natural –  if by nature you mean what we always mean, which is space, time, matter, physics, chemistry.”
Astronomer Hugh Ross, who heads up Reasons to Believe sees God in the universe’s birth.
“It has a beginning, which implies there must be a Beginner who was responsible for bringing the universe into existence,” the astrophysicist said.

And there’s such precise design.

Wallace stated, “We have fine-tuning in the universe that’s so finely-tuned that the smallest variation in the universal constants, you wouldn’t even have a universe in which we have life at all. Now, what are the odds of that happening on its own?”

All Life Could Stop on a Dime

And just how finely-tuned is it for life?

“If you were to add the weight of one dime to the universe or subtract the weight of one dime from the observable universe, that would be enough to upset the balance to make life not possible,” Ross said, adding, “How can we escape the conclusion there must be a mind with supernatural power that designed it just right so we could be here?”

Ross contends Earth needs to be just where it is on the arm of a spiral galaxy just like the Milky Way for life to exist here. Also that the unique feature of Earth’s moon being as large as it is compared to its planet’s size makes it able to control the tilt of the Earth’s axis and the length of its daily spin in just such a way to make the planet optimal for life.
Finally, Ross said the entire solar system is just perfectly balanced to achieve that end.
As he put it, “We’re not looking at just a highly fine-tuned Planet Earth. The entire solar system has been highly fine-tuned to make possible the existence of advanced life. Every one of the eight planets in our solar system plays a critical role.”
Jesus Christ Wasn’t Just in the Bible
But what about Jesus Christ, His resurrection and deity?

Some people say they’ll never believe Jesus Christ is God because all the proof for it is in the Bible, and they just don’t believe the Bible.

As an atheist, Josh McDowell set out to disprove Christianity and the Bible, but found so much evidence, it changed his life to one of faith. The result was his book Evidence That Demands a Verdict. And he found much proof for Christ outside the Bible.

He stated, “In this book Evidence, I give 20-some totally extra-biblical sources that you could recapture almost everything about Christ – that He was raised from the dead, He fulfilled the prophecies, etc. etc. etc. – from non-biblical sources.”

Some Christian reviewers rate Evidence That Demands a Verdict as the most thorough and comprehensive book when it comes to evidence for Christ’s existence. And there’s more at McDowell’s online resources page.
Alex McFarland’s Truth for a New Generation puts on conferences nationwide to arm Christians with proof their God and faith is real – like the one in Greensboro, North Carolina where CBN News interviewed Wallace, McDowell and him. He pointed out what one of America’s top twentieth-century historians – Will Durant, a non-believer – had to say.
“Durant, when he was not a Christian, said the four biographies, Matthew, Mark, Luke, and John: their historicity was (quote) ‘indisputable,'” McFarland remarked.
To find out more on McFarland’s defenses of the faith, you can search his website or his blog.
The Passed-Down Facts Go All the Way Back to the First Disciples
Some claim the New Testament was written hundreds of years after Jesus’ time. So they suggest all the supernatural details about Christ could have been added in long after His death. But as witnesses, the earliest disciples memorized, sang and wrote down statements of Christ’s miraculous life starting right after His death and rising from the dead.

“Deity, death, resurrection, Son of God, paid for our sins, rose from the dead – these doctrinal formulae, if you will, these statements of belief, come to us within – not years, not months – but weeks after the crucifixion,” McFarland stated. “These verbalized, memorized creedal statements come within perhaps four to eight weeks after the Cross.”

Wallace talks of how cold case detectives look for a solid chain of custody for all the evidence in an old case. And when it comes to Christ, “Every supernatural element related to Jesus from the virgin birth to the resurrection to the ascension to ‘seated at the right hand of the Father,’ all of that stuff is in the very earliest accounts and in the very first links in the chain. It never changes. It’s never altered.”
You Want ‘Early, Eyewitness, Multiple & Even Hostile’
And Jesus’ earliest disciples said not only were they eyewitnesses to Christ’s miracles but so were their opponents there in Jerusalem.
McDowell hearkened back to his first months beginning to investigate Christ’s existence. He recalled, “I had to define ‘what is truth, and what do I accept as true statements, true acts historically?’ And one was this: was it presented in the presence of hostile witnesses? Where if what they [the apostles] were saying was false, it would be exposed as false. And the apostles did this.”
McDowell continued, “They would constantly appeal to the knowledge of hostile witnesses of the truth that they were saying. They’d say ‘you know what I’m talking about; you were there; you saw Him do this; you heard Him do this.'”

“The teachings of Christ, even His crucifixion and resurrection – we have testimony that is early, eyewitness, multiple sources and even hostile sources.”

He concluded, “The idea that there was a conflation, and they made Jesus into something that He never claimed to be, over hundreds of years, that’s just not what the record of history shows.”

If It was all a Conspiracy, It’s the Most Flawless One in History

Wallace insists Christianity couldn’t have just been a conspiracy of liars who never cracked. There were way too many witnesses to Christ’s life and resurrection – hundreds of them – later facing too much persecution and torture for at least a few to not ‘fess up if they were all simply lying.

“They were under incredible pressure where many of them lost their lives in defense of what they said was true,” he stated. “And we don’t have a single ancient record of any of the disciples ever recanting when that was often the goal of the people who were persecuting Christians.”

The investigator added, “This is why I think the deaths and the martyrdoms of the disciples is a key piece.”

You can find out many other ways Wallace has for investigating and finding proof for God’s existence and the truth of Christianity at his website, Cold Case Christianity.

If God Exists, You Win…Unless You Gamble He Doesn’t

But you may feel none of this has anything to do with you and you shouldn’t have to think about it. Well, what if there is an eternity, and what you believe about Jesus Christ will determine where you spend it?

Wallace implored that if you’re a total non-believer, for your own sake, consider the idea there’s a miracle-working Savior – with one caveat.

“You can’t begin by saying ‘I don’t believe in the supernatural.’ That’s the thing you’re trying to investigate,” the cold case detective said. “If you start out by denying the supernatural, you’ll never get to whether or not there’s anything supernatural. You’ve already decided there isn’t.”

Watch report here: God the Father, Son, and Holy Spirit
Did you know?
God is everywhere—even in the news. That’s why we view every news story through the lens of faith. We are committed to delivering quality independent Christian journalism you can trust. But it takes a lot of hard work, time, and money to do what we do. Help us continue to be a voice for truth in the media by supporting CBN News for as little as $1.