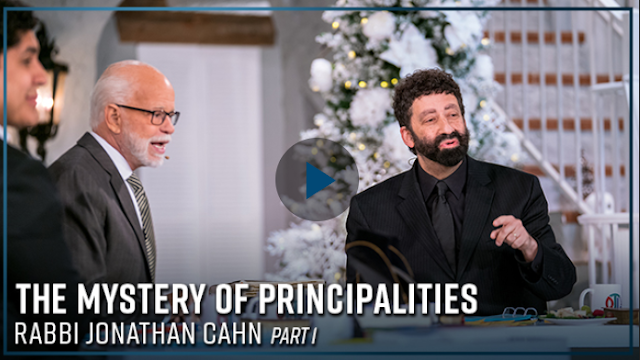 The Mystery of Principalities (Part 1 )

Our faith was based on reality. It’s based on God intervening in human history and prophecy and it is not going anywhere despite what the world wants. -Rabbi Jonathan Cahn
We are to be that candle in the night. You will light up the world. The one who stands for God, the one who will not compromise the one who says, “Lord whatever it is, I’m going all out for you,” God is going to lift that one up. -Rabbi Jonathan Cahn

2 Thessalonians 2:3 MEV Do not let anyone deceive you in any way. For that Day will not come unless a falling away comes first, and the man of sin is revealed, the son of destruction.
Matthew 24:12 NKJV And because lawlessness will abound, the love of many will grow cold.
2 Kings 9:22 KJV And it came to pass, when Joram saw Jehu, that he said, Is it peace, Jehu? And he answered, What peace, so long as the whoredoms of thy mother Jezebel and her witchcrafts are so many?
Genesis 19:24 MEV Then the Lord rained brimstone and fire on Sodom and Gomorrah. It was from the Lord out of heaven.
Zechariah 12:3 MEV And it will be on that day that I will set Jerusalem as a weighty stone to all the peoples. All who carry it will surely gash themselves, and all the nations of the land will be gathered against it.
Ezekiel 47:10 MEV It shall come to pass that the fishermen shall stand upon it. From En Gedi even to En Eglaim there shall be a place to spread out nets. Their fish shall be according to their kinds, as the fish of the Mediterranean Sea, exceedingly many.
Matthew 16:3 MEV “And in the morning, ‘It will be foul weather today, for the sky is red and overcast.’ O you hypocrites, you can discern the face of the sky, but you cannot discern the signs of the times.”
Ephesians 6:10 NIV Finally, be strong in the Lord and in his mighty power.
Ephesians 6:12 NIV For our struggle is not against flesh and blood, but against the rulers, against the authorities, against the powers of this dark world and against the spiritual forces of evil in the heavenly realms.
Deuteronomy 32:16-17 KJV They provoked him to jealousy with strange gods, with abominations provoked they him to anger. They sacrificed unto devils, not to God; to gods whom they knew not, to new gods that came newly up, whom your fathers feared not.
Psalm 106:34-38 MEV They did not destroy the nations as the Lord commanded them, but they mixed among the nations and learned their deeds; they served their idols, which were a snare to them. Yes, they sacrificed their sons and their daughters to demons, and poured out innocent blood, even the blood of their sons and of their daughters, whom they sacrificed to the idols of Canaan, and the land was polluted with blood.
1 Corinthians 10:19-20 MEV What am I saying then, that the idol is anything or that which is offered in sacrifice to idols is anything? 20 But I say that the things which the Gentiles sacrifice, they sacrifice to demons, and not to God. I do not want you to have fellowship with demons.
Revelation 2:13 MEV I know your works and where you live, where Satan’s throne is. Yet you hold firmly to My name, and did not deny My faith even in the days of Antipas, My faithful martyr, who was killed among you, where Satan dwells.
1 Samuel 5:2 MEV When the Philistines took the ark of God, they brought it into the house of Dagon and set it by Dagon.
1 Samuel 5:4 MEV When they arose early on the next morning, again Dagon was fallen upon his face to the ground before the ark of the Lord, and the head of Dagon and both the palms of his hands were cut off upon the threshold. Only the torso of Dagon was left to him.
Luke 1:49 MEV For He who is mighty has done great things for me, and holy is His name.
Isaiah 9:2 MEV The people who walked in darkness have seen a great light; those who dwell in the land of the shadow of death, upon them the light has shined.
Exodus 15:11 MEV “Who is like You, O Lord, among the gods? Who is like You, glorious in holiness, fearful in praises, doing wonders?