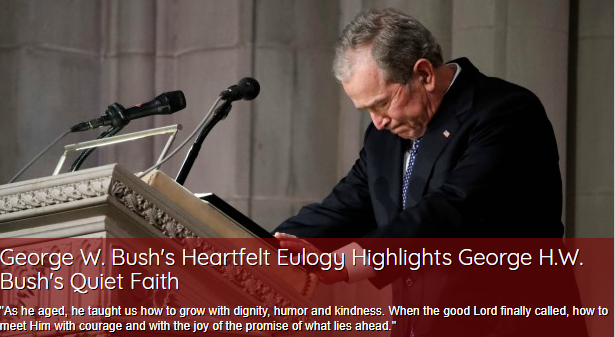 The 43rd president of the United States stood up, composed himself and then delivered a deeply touching eulogy for the 41st president.
This was more than one successor honoring his predecessor. Rather, it was a son remembering his father, and sharing the intimate details that really made George H.W. Bush click, including the elder’s vibrant prayer life.
“To his very last days, dad’s life was instructive. As he aged, he taught us how to grow with dignity, humor and kindness. When the good Lord finally called, how to meet Him with courage and with the joy of the promise of what lies ahead,” George W. Bush said.
“One reason Dad knew how to die young is that he almost did it, twice. When he was a teenager, a staph infection nearly took his life. A few years later, he was alone in the Pacific on a life raft, praying that his rescuers would find him before the enemy did. God answered those prayers. It turned out he had other plans for George H.W. Bush,” the younger Bush continued.
Then later: “Dad taught us that public service is noble and necessary, that one can serve with integrity and hold true to the important values like faith and family. He strongly believed that it was important to give back to the community and country in which one lived. He recognized that serving others enriched the giver’s soul. To us, his was the brightest of a thousand points of light,” George W. Bush said.
And: “Jeb and I were too young to remember the pain and agony he and Mom felt when our 3-year-old sister died. We only learned later that Dad, a man of quiet faith, prayed for her daily. He was sustained by the love of the Almighty and the real and enduring love of her Mom. Dad always believed that one day he would hug his precious Robin again.”
Watch the video to see the full eulogy.
Love For His People, Inc. founded in 2010 by Steve & Laurie Martin. Charlotte, NC USA