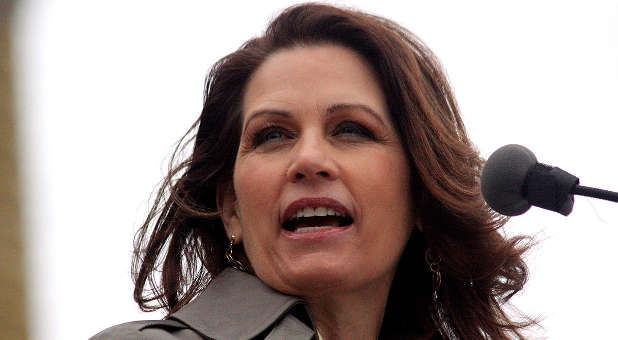 Bachmann: ‘There Is No Greater Proof of God’s Word Than the Existence of Israel’

5:15PM EST 11/16/2018 SHAWN A. AKERS  CHARISMA NEWS
Former Congresswoman Michelle Bachmann is passionate about the state of Israel. As a Christian, she longs to see Christ-followers and Jews work together for the peace of Jerusalem.
Bachmann delivered the opening prayer for the Jerusalem Prayer Breakfast (JPB) this week in Orlando. She then took time to speak with Charisma News in an exclusive interview at the JPB, an event she co-chairs.
CN: Why is the Jerusalem Prayer Breakfast so important?
MB: The prayer breakfast is a point really for Christians to awaken their senses to biblical admonition to pray for the peace of Jerusalem and to stand with Jerusalem and to bless Jerusalem. Genesis 12:3 is very clear: Those who bless Israel will be blessed, and those who curse Israel will be cursed.
Get Spirit-filled content delivered right to your inbox! Click here to subscribe to our newsletter.
We’ve seen it in the United States, even from a political perspective, as President Harry Truman recognized Israel in 1948. The United States, at that time, became the military and economic superpower of the world. Prior to the mid-1940s, America was not the military and economic superpower of the world. So, in many ways, the United States has been put on a tremendous pathway of blessing.
I believe also, too, with President Donald Trump recognizing and declaring Jerusalem as Israel’s rightful eternal undivided capital, that also puts the United States on a pathway of blessing. And why? It’s because we’re agreeing with what the Bible says. It isn’t that we have a Republican president who did something right or a Democratic president who did something right. It’s the fact that our governmental leaders are agreeing with Scripture. And that is blessing our country. The more we understand Scripture, and the more we understand what our role and obligations are under Scripture, and we walk out those obligations, we will be blessed. It’s the combination of belief plus obedience that equals blessing. The Jerusalem Prayer Breakfast to me is about blessing—blessing Israel—and we are blessed.
CN: You said there is no greater proof of God’s Word than the existence of Israel. Can you expound upon that?
MB: Scripture foretold that Abram would be made a nation. Then, out of disobedience, they were dispersed—the great diaspora outside of the land—not once but twice. After the second diaspora, they had been away from the land for about 2,000 years until, as the prophets foretold, they would be brought back to the land—the same people to the same land, the same language, the same God, the same faith and the same money, in fact. So, the people came back to the land, and what people don’t realize is that even the language was dead at that point. So, the people had to be taught Hebrew once they came back.
This is an unbelievable miracle. The Bible foretold that the modern Jewish state would be rebuilt, and within the lifetimes of many here (at the JPB). That actually happened. We are witnesses to the fulfillment of prophecy. But the prophet Ezekiel prophesied that even Jerusalem would come back into Jewish hands. That is also the fulfillment of prophecy. That didn’t happen in 1948. That didn’t happen until 51 years ago in 1967. In my lifetime, I have witnessed the fulfillment of Ezekiel’s prophecy. When you let that sink in, within our modern era, we are witnesses of prophetic fulfillment. That should not only build up our confidence and faith, it should build up our appreciation for the Bible.
As the authoritative Word of God, the Bible should be even more trustworthy. The Bible isn’t done. There are still more events to come. They will happen as they are prophesied, including the Second Coming of Messiah, Jesus Christ. We know that is going to happen. Because of that, that should cause us to live our lives differently, to view God differently and to view His Word differently. That’s really what this is about—recognizing, appreciating and understanding how true and trustworthy God’s Word is. Israel is the greatest miracle of the Bible, and it is the greatest indicator that the Bible is true.
CN: What are the best weapons we have against anti-Semitism right now?

MB: Obviously the best weapon we have is the Word of God. We must understand that the attacks of anti-Semitism have a Satanic base, going all the way back to the Garden of Eden. There’s always been this war between God and Satan. Satan hates Israel because Israel is the blessing to the world. From Israel comes the Messiah. God’s plan begins and ends in Jerusalem. That’s why Satan has this continual desire to kill Jews, to destroy the Jewish state, to destroy the Jewish way of life so that the blessings for the world are destroyed.
If there is no Israel, there are no Jewish people. If there is no Jerusalem, there is no Jewish way of life. There is no capacity to bless the nations of the world. Satan’s plan would be to stop that. Today, unfortunately, you have people questioning if there really is a God, Current statistics say that 1 out of 4 people has no faith at all. We’re going in the wrong direction.
As believers, there is more reason to have faith today than at any time in history because we have seen more fulfillment of prophecy, of the Word of God. Some people are afraid of that word “prophecy.” They think it sounds weird. It’s not weird. It is just the foretelling of what God is going to do, what God said He would do. We have lived long enough to see the fulfillment of that Word. Not just to appreciate from a historical perspective, but from a current perspective, we are living it.
It’s also interesting to realize that the prophets wrote that they longed to live in the days you and I are living in. Ezekiel, Jeremiah, the great prophets—they were able to foretell these days that are upon us. We get to live these days that are upon us. That should give us greater joy of what is yet to come.
CN: JPB Director Albert Veksler said when Jews and Christians work together, history will be made. What are your thoughts on that?
MB: That’s exactly right. (Thursday morning,) Albert gave a wonderful brief history of Jews and Christians coming together just in modern times. I think we’ve seen this from Christ’s coming the first time. We have seen Jews and Christians work together and not work together. We’ve seen both sides of it. There is no question that in God’s sovereignty, in his timetable, He chose to bring Jews and Christians together for a reason. Look at the Old and New Testament, how they perfectly work together. It is a part of seeing the fulfillment of the Old Testament prophets and what is yet to come.
CN: What can churches do to reach out to Jews to make the relationship better going forward?
MB: The first thing is love. I think Scripture is very clear. For Christians, our job is to provoke our Jewish brothers unto jealousy. That sounds like a weird thing. What the Bible is saying there is that when we demonstrate our love for God and our love for His Word, the Jewish people will want that, too. They want a close relationship with God. They want a close relationship with the Word. After all, it is their story. When they see us loving God and being loved by God, loving His Word and loving the Jewish people—because that’s what the Bible calls us to do—I think that is the demonstration that transforms individuals.
We know that when Jesus left to be with the Father, He left his Holy Spirit here on this earth. He said, ‘I go away so the Spirit can be here.’ He said you can do more now that My Spirit is here.
Why would we doubt that? Why would we doubt the power of His Spirit here on this earth? His Spirit is what transforms me; it’s what transforms you; and His Spirit will be what draws Jewish people back to God. When I say that, I’m not doubting their faith. I don’t say that in any way to cast dispersion on any Jewish person that they are secondary or inferior, because they are not. But it is interesting; Romans teaches us about Abraham, that Abraham believed God and it was accounted to him as righteousness. The Abrahamic formula is the same for every human being through all of history. When we believe, that is the righteousness. It is not good works, it is belief. Abraham believed; we can believe. The story is the same for Jews as it is for Christians as it is for atheists and Muslims. If we believe the God of the Bible, we are saved. That is the Good News, and that is for all.

Get Spirit-filled content delivered right to your inbox! Click here to subscribe to our newsletter.
Help Charisma stay strong for years to come as we report on life in the Spirit. Become an integral part of Charisma’s work by joining Charisma Media Partners. Click here to keep us strong!
Share
Tweet
Email
More