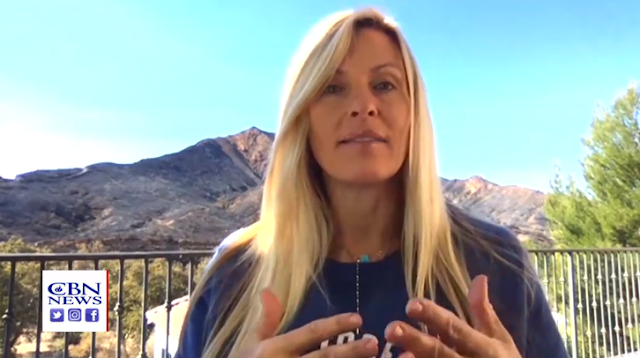 Actress Brenda Epperson who lives in the region affected by the fires. She once starred in the daytime drama The Young and The Restless.
Hollywood Actress Whose Property Was Miraculously Saved
from Deadly Fire Says God is Bringing Revival to California
11-15-2018
CBN News Emily Jones
California officials say they’ve identified 59 people who died in the wildfires that have ravaged the state for more than a week.
Governor Jerry Brown is calling on the National Guard to help search for more victims and the death toll is expected to rise.

CBN News spoke with actress Brenda Epperson who lives in the region affected by the fires.
She once starred in the daytime drama The Young and The Restless. She has been posting videos on Facebook about the flames and the destruction, how God spared her home miraculously, and what she’s doing to help others in the aftermath.
Related Death Toll Soaring in California with 100+ Still Missing: ‘It Looks Like a War Zone’ ‘You Can’t Replace Humans’: The Late Billy Graham’s Grandson on the Importance of Christians Reaching Out to Wildfire Victims

Epperson says in a Facebook video that she prayed Psalm 91 over her home, and the fire miraculously stopped right at the border of her property.
“I just kept praying Psalms 91 over our home, ‘whoever dwells in the shelter of the Most High will find rest in his mighty shadow. I will say of the Lord he is my refuge and my God in whom I trust. Surely, he will save you from the fowler’s snare and the deadly pestilence. A thousand may fall at your side, ten thousand at your right hand but it will not come near you.”
Epperson’s home is an oasis of green and life in the midst of her scorched neighborhood. Even the horses from other farms took refuge at her home during the fire.

“We could only evacuate the horses that could fit in our trailer which was three horses. And then all of our neighbors had borders so all of their horses, 25, 30, horses went in that pen. And so there were 35 horses there and the fire stopped. God stopped that fire, Wendy, right at our property line,” she said. “Every horse was okay. They had water, they didn’t even have ash on them.”

Now, Epperson and her family are helping anyone who’s lost their homes. They’re helping drive people to their homes and providing food, supplies, and whatever they need.

“Two gentlemen we drove down…it was just so devastating to watch, to drop them off and to watch them walk down this dirt road. Everything was burnt and they just said, ‘My home is gone,’ and they just walked into the distance,” she explained.

Despite the devastation, Epperson believes God will turn tragedy into an opportunity for people to know Him.

“The good that’s going to come out of it is I believe that revival, that God is going to wake us all up. I know my life is changed and I just want to share the love of God even more with everybody,” she shared.

“I just want to say that God’s love is there for each one of us if we would just simply say, ‘Yes.’ And it’s been an honor helping friends and neighbors,” Epperson added.

Watch the interview here: Brenda Epperson – actress in California
Did you know?
God is everywhere—even in the news. That’s why we view every news story through the lens of faith. We are committed to delivering quality independent Christian journalism you can trust. But it takes a lot of hard work, time, and money to do what we do. Help us continue to be a voice for truth in the media by supporting CBN News for as little as $1.