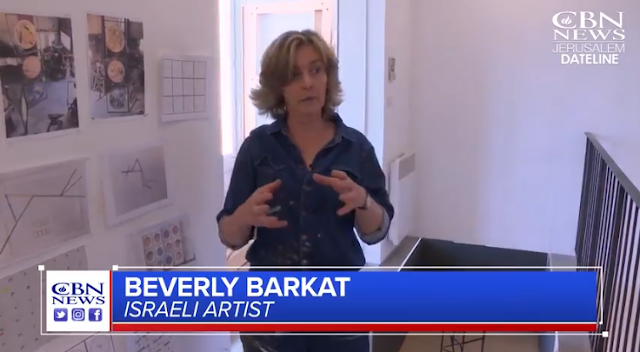 JERUSALEM, Israel – The story of the Jewish people starts with Abraham and eventually grows into
the 12 tribes of biblical Israel. One Jerusalem artist is blending ancient and modern Israel in her work of paintings titled “After the Tribes.”

Artist Beverly Barkat took the soil, sand and shells from the land of Israel to tell her story of the 12 tribes.
“Each one received their own land and each one had their own specific workplace, what they did, how they did it and it’s all in the paintings of the 12 tribes,” Barkat told CBN News.

“So when I researched them, like Zebulun if we go all the way here, Zebulun on the flag, represented them [as] a ship because they were in commerce, so they went offshore. They were sailors,” she explained.

Barkat says the Torah provided them with much understanding and influence.

“They studied the Bible. They actually came up with realizing that the moon starts very thin and goes throughout the month and at the end of the month, it’s big and then it starts thin again and that dynamic of knowing how the moon moves and holidays, Hebrew Jewish holidays – the interaction with religion. They brought that to the table.”

Her word led Barkat to see a connection between the ancient tribes and today’s Jewish state.

“And that’s what’s so special about each tribe…that they had their specialty that they brought to this one whole thing called Israel today.”

While the 12 tribes spread throughout the Promised Land, Jerusalem brought them all together.

“And then they go back to Jerusalem. Oh wow. New ideas, new speculations, new – new spices. So that tapestry of spread out all over is actually what I feel exists today,”

Barkat is married to Jerusalem Mayor Nir Barkat, who has led the city for nearly a decade.

“I do know that he’s changed Jerusalem around, that he’s created hope for everyone and he’s done it in a way that he taught me about the 12 tribes in Jerusalem,” she said.

Barkat hopes her work reflects the uniqueness of today’s Israel.

“You can walk around today in Israel and you can taste in the restaurants new, innovative tastes, the way of cooking, the way of hi-tech. Innovative. And that’s the dynamic aspect of what I wanted to create here is that you really feel the dynamic way of living,” she concluded.

Watch here: Jerusalem Artist
Did you know?
God is everywhere—even in the news. That’s why we view every news story through the lens of faith. We are committed to delivering quality independent Christian journalism you can trust. But it takes a lot of hard work, time, and money to do what we do. Help us continue to be a voice for truth in the media by supporting CBN News for as little as $1.