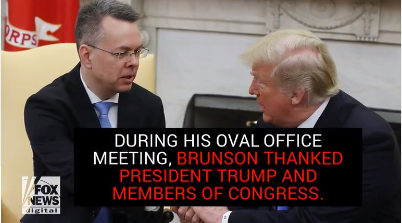 The decision by Turkish officials to release American pastor Andrew Brunson, who met with President Trump at the White House on Saturday, was welcome news. It was a testament not only to the president’s strength but, more importantly, his strength of heart and character.

A Turkish court freed Brunson Friday, after he had been held prisoner for two years following an attempted military coup in Turkey. He was charged as a conspirator in the plot, but Turkish authorities were unable to provide any satisfactory evidence to back up the charges against him.

In truth, the only thing Brunson ever conspired to do was to spread the word of God, as he had been doing in Turkey for over 20 years.

After being arrested and imprisoned under appalling conditions – where he was subjected to regular attempts to convert him to Islam – Turkish officials moved the 50-year-old pastor to house arrest in July in the face of U.S. pressure. But that wasn’t enough for President Trump and his administration.

The day after Brunson was placed under house arrest, Vice President Mike Pence issued a stern warning to the Turks on behalf of President Trump.

“To believers across America, I say, pray for Pastor Brunson.” Pence said. “While he is out of jail, he is still not free. And to President Erdogan and the Turkish government, I have a message on behalf of the President of the United States of America: Release Pastor Andrew Brunson now or be prepared to face the consequences.”

“If Turkey does not take immediate action to free this innocent man of faith and send him home to America, the United States will impose significant sanctions on Turkey until Pastor Andrew Brunson is free,” Pence added.

The Trump administration didn’t stop there. It continued to threaten further sanctions unless Brunson was released. When the Turkish court finally released Brunson, it was against the wishes of the government prosecutors. They sought to imprison him for a decade.

President Trump could have easily sacrificed Brunson to maintain good relations with Turkey, a NATO ally. That nation’s strategic location makes it crucial to containing Russian ambitions in the Middle East.

The mainstream media still take every possible opportunity to paint President Trump as egotistical and uncaring, but his positive, heartfelt actions speak far louder than their negative, heartless words.

Previous American presidents, pursuing the globalist agenda, would have quickly caved to Turkey, given the geopolitical realities of the situation. President Trump didn’t. I know this president’s heart – and I know he would never do such an expedient thing. Instead, he did the right thing.

Time and time again, we’ve seen this from the president. When pursuing a successful diplomatic breakthrough with North Korea, President Trump didn’t just seek nuclear disarmament and the normalization of diplomatic relations. He demanded the return of imprisoned Americans and the return of the remains of those who died in the Korean War.

On the eve of his inauguration, President Trump gave $10,000 of his own money to a supporter who had fallen on hard times, a FedEx employee named Shane Bouvet. Last year, he gave $1 million of his personal fortune to help with Hurricane Harvey relief efforts. Since taking office, President Trump has consistently given up his quarterly salary to government agencies and causes in need of funding.

With the release of Brunson, President Trump has once again displayed his moral fortitude.

This case hits home for me both as a Christian and president of Liberty University. Brunson’s daughter, whose husband serves in the military, shouldered many burdens in her fight to get her father released. She is an online student through Liberty University and we chose to give her a full scholarship to pay her remaining tuition fees.

Now that Brunson has been released, over 3,000 letters written by Liberty students have been sent to Secretary of State Mike Pompeo, thanking him for his work in this case and encouraging him to keep up the administration’s fight for religious liberty around the world. My wife Becki and I wrote one of them and we were beyond thrilled to have the opportunity to do so.

The mainstream media still take every possible opportunity to paint President Trump as egotistical and uncaring, but his positive, heartfelt actions speak far louder than their negative, heartless words.

I’m often asked how an evangelical Christian can support a man like President Trump. The answer is simple. I learned long ago to judge people – especially politicians – by their actions and not their words.

Plenty of presidents have paid lip service to God, but few, if any, have demonstrated a consistent tendency to walk in Christ’s shoes and make the morally correct decision instead of the politically easy one.

I am proud to call President Trump my friend. Above all, I’m proud of what he’s doing for our country and countrymen, at home and abroad.

Jerry Falwell Jr. is the president of Liberty University.