10/6/2018 TAYLOR BERGLUND   CHARISMA NEWS
Justice Brett Kavanaugh was confirmed to the Supreme Court of the United States today by a Senate vote of 50-48. Shortly thereafter, the Supreme Court announced that Kavanaugh would be sworn in as an associate justice immediately so he could begin to participate in court hearings.
Christian leaders who had supported Kavanaugh in the last few weeks rejoiced over the confirmation.
Stephen E. Strang, CEO of Charisma Media and author of God and Donald Trump and the upcoming Trump Aftershock, said in a statement, “I believe God answered prayer and overcame the evil intentions of those Democrats who hurled unsubstantiated accusations at Brett Kavanaugh to keep him off the High Court. It’s significant that he is a strong Christian, and I believe he will be a strong constitutionalist, which is exactly what we need on the Supreme Court.”
New York Times best-selling author Brigitte Gabriel applauded the confirmation vote in an official statement.
Get Spirit-filled content delivered right to your inbox! Click here to subscribe to our newsletter.
“The confirmation vote of Supreme Court Justice Kavanaugh will positively impact America’s culture for decades to come. He suffered the political attacks of Democrats but he prevailed and many Republicans finally came to his defense to make history today,” Gabriel said. “America takes a step in the right direction with this vote, and this man will uphold the principles our judicial system was founded upon as a strict constitutionalist.”
On Facebook, Franklin Graham called for prayer.
“Congratulations to U.S. Supreme Court Justice Brett Kavanaugh!” Graham said. “He didn’t deserve to be treated the way he was in this process—no one deserves that. I’m so thankful that God overruled. Justice Kavanaugh does need one thing though—he needs our prayers. Let’s pray for him and his family in this critical appointment. I’m confident he will do a great job for all Americans.”
Catherine Glenn Foster, who serves as president and CEO of the pro-life legal organization American United for Life, says Kavanaugh’s confirmation means that Roe v. Wade will soon be overturned.
“For the first time in decades, a majority of justices appear to understand not only that life begins at conception, as affirmed by medical science, but also that Roe was an egregious example of constitutional overreach,” Foster said. “We look forward to the day when Roe v. Wade takes its proper place among rightly repudiated rulings like Plessy, Korematsu and Dred Scott as one the court’s most shameful decisions. With Justice Kavanaugh on the Supreme Court, we have confidence that that day is soon at hand.”
Vice President Mike Pence also released an official statement praising Kavanaugh on Twitter.
View image on Twitter 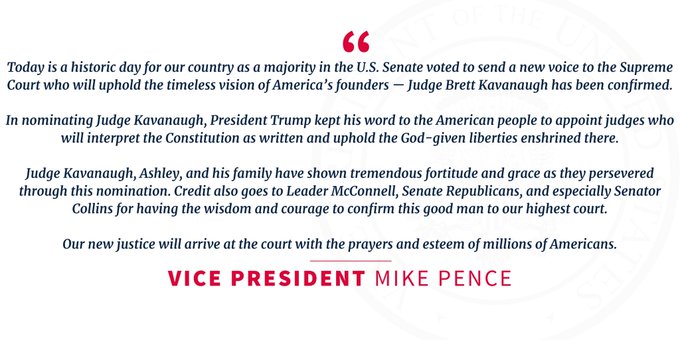 @VP
Today is a historic day for our country as a majority in the U.S. Senate voted to send a new voice to the Supreme Court who will uphold the timeless vision of America’s founders — Judge Brett Kavanaugh. My full statement below: