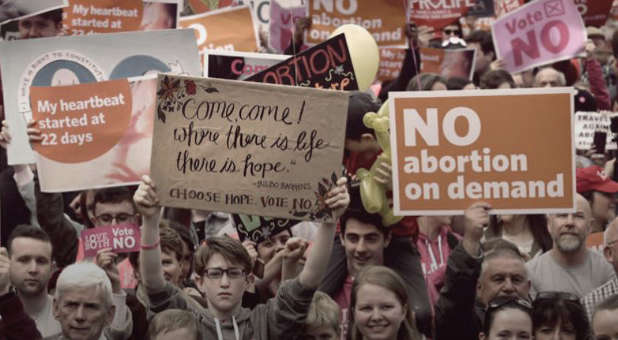 10/3/2018 ACLJ STAFF
The tentacles of Big Abortion are snaking their way across the globe to constrict the voices of pro-life workers.
Lawmakers are trying to make pro-life pregnancy centers promote abortion to desperate pregnant women looking for answers and help. This might sound familiar, but it’s not just happening here in America.
Remember how we told you Big Abortion has worked tirelessly to manipulate abortion friendly lawmakers and pass laws that would force pro-life pregnancy centers to promote government funded abortion. Pro-abortion organization NARAL—the same vile group peddling abortion-themed ice cream “Rocky Roe vs Wade” in Oregon—championed legislation that would shut down pro-life centers in California that didn’t also advise pregnant women of abortion as a viable option.
We scored a major victory for life in that case, as the Supreme Court agreed with us, ruling that the state cannot force pro-life pregnancy centers to parrot a government-dictated pro-abortion message that was in stark contrast to the very reason they were created—to be an alternative to abortion.
Get Spirit-filled content delivered right to your inbox! Click here to subscribe to our newsletter.
This was just one small victory in the global battle to end abortion and save countless innocent, precious lives. Big Abortion will not go down without a fight, and it has expanded its efforts far beyond America.
Now pro-abortion leaders in Ireland are reportedly pushing eerily similar legislation that would force Catholic pregnancy centers to promote abortion. This move is being spearheaded by Ireland’s Health Minister Simon Harris.
Harris said every pregnancy center that receives taxpayer funding will be required to provide its clients with information about where they can get abortions; there will be no religious or moral exemptions.
“I believe that crisis pregnancy agencies, regardless of who owns them or who runs them, if they’re funded by the taxpayer, should make all of the information available to women,” he said.
Traditionally thought of as a Christian nation, with one of our own annual holidays named for its Patron Saint, Ireland only recently voted to legalize abortion. This decision to overturn Ireland’s 8th Amendment, repealing protections for women and unborn babies was rightly characterized by pro-life advocates in the country as “a tragedy of historic proportions.”
Irish Health Minister Harris is trying to push his legislation through as quickly as January of 2019.
Along with snatching the free speech out of the mouths of pro-life workers, Harris reportedly wants to force all hospitals and medical facilities that receive public funding to have to perform abortions.

Perhaps the most disturbingly familiar part is that Harris wants the Irish taxpayers to pay for these abortions, regardless of how they feel about it. In a recent interview, Harris was cagey about the exact numbers free abortion will cost the Irish taxpayers.
“Obviously, there’s a cost with all of this. Those costs will be determined both through the estimates process and through the discussions that I’ll have in terms of the contractual obligations,’ he said. ‘This needs to be resourced, it needs to be resourced adequately so that we can have safe, women-centered provision of this service in our country.”
However the Irish Times has put the cost at about $5.8 million in taxpayer dollars per year. If that figure doesn’t seem like very much, keep in mind the country of Ireland is just over 1 percent the population of the United States.
And regardless, no one should have to pay a single penny toward someone else’s abortion. Especially because the government tells them they have to.
The Irish people need to stand against this legislation and demand that not a single cent of their taxes goes to support killing babies, before Big Abortion sinks its claws any deeper into their nation and their religious liberty.
We recently told you how Ireland has already used abortion to “cure” Down syndrome in the country, exterminating anyone who may possibly be born with disabilities.
As abortion spreads internationally, we see the effects here at home.
The ACLJ fought to help strike down similar laws targeting pro-life pregnancy centers and protect free speech for pro-life pregnancy centers in California and in Hawaii. And we just helped cut off taxpayer funding to one abortion-related business that was selling aborted babies’ body parts to the federal government.
Here in America, we are fighting Big Abortion right now in courtrooms across the nation—and at the Supreme Court—fighting to end taxpayer funded abortions and cripple Planned Parenthood and its empire of death permanently. At the same time, we are fighting internationally to defeat Big Abortion. The defenseless across the globe need your voice.