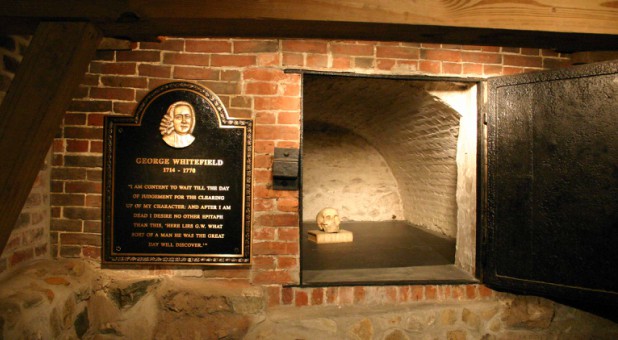 A Stark Reminder for the Church During the Kavanaugh Hearings

9/27/2018 EDDIE HYATT  CHARISMA NEWS
The vitriolic accusations, hatred, anger and threats of death surrounding the confirmation of Judge Kavanaugh are a stark reminder that we are part of a fallen and sinful race, in need of a Savior.
It has also reminded me of a message George Whitefield preached in 1739 from the steps of the Philadelphia courthouse to a massive crowd that included Benjamin Franklin and the leading citizens of that city. Whitfield did not hold back, but in stark terms, and a bit of hyperbole, painted a very unflattering picture of the fallen state of humanity. As the huge crowd stood and listened in rapt silence, Whitefield’s passionate and melodious voice pierced the atmosphere.

But let these modern, polite gentlemen and my letter-learned brethren, paint man [humanity] in as lovely colors as they please; I will not do it; I dare not make him less than the word of God does. If I was to paint man in his proper colors, I must go to the kingdom of hell for a copy; for man is by nature full of pride, subtlety, malice, envy, revenge and all un-charitableness; and what are these but the temper of the devil? And lust, sensuality, pleasure, these are the tempers of the beast. Thus, my brethren, man is half a beast and half a devil.

Whitefield then proceeded to show that fallen humanity’s only hope is Jesus Christ. “We cannot save ourselves by good works,” Whitefield argued, for that would make us our own saviors and the death of Christ unnecessary. “Come to Christ,” he pleaded, and put your faith completely in Him.
Get Spirit-filled content delivered right to your inbox! Click here to subscribe to our newsletter.
Franklin remembered this sermon and alluded to it many years later when he wrote his Autobiography. Franklin also told of the transformation that came over Philadelphia as a result of Whitefield’s preaching. He wrote,
The multitudes of all sects and denominations that attended his sermons were enormous, and it was a matter of speculation to me, who was one of the number, to observe the extraordinary influence of his oratory on his hearers. From being thoughtless or indifferent about religion, it seemed as if all the world were growing religious so that one could not walk through the town in an evening without hearing psalms sung in different families of every street (Hyatt, Pilgrims and Patriots, 102).

Although Whitefield was a passionate preacher, it was not his preaching style that brought about the transformation. Neither was it great singing for there was no praise band or worship team that traveled with Whitefield. It was, instead, the Message itself backed by much prayer.
This understanding is critical, for in Romans 1:16, Paul speaks of the inherent power of the Gospel Message and warns, that if we go too far in attempting to make the Message “cool, hip and acceptable” to contemporary culture, we run the risk of preaching a Gospel that has been “emptied of its power” (1 Cor. 1:17, NIV).
The vitriol and hatred surrounding Judge Kavanaugh’s nomination should cause us to pause and ask ourselves if we have gone too far in preaching a feel-good, I’m OK – you’re OK sort of Message. In trying not to offend contemporary culture, have we been preaching a watered-down, powerless Gospel?
America was birthed out of a Great Awakening that derived its power from the Message that was proclaimed. This is what the late Harvard professor, Perry Miller, was referring to when he said, “The Declaration of Independence of 1776 was a direct result of the evangelical preaching of the evangelists of the Great Awakening” (Hyatt, Pilgrims and Patriots, 108).
Perhaps it is time for the modern church to take a page from the preaching of George Whitefield and the evangelists of the Great Awakening.