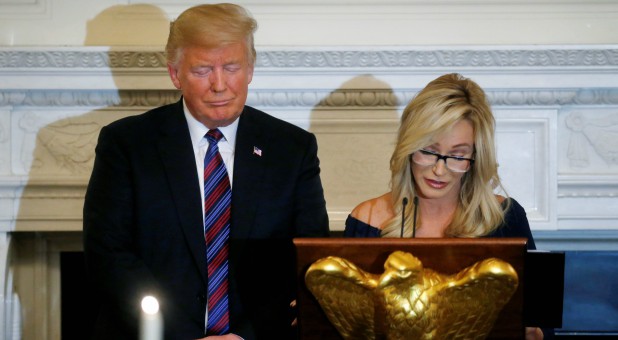 9/24/2018 JESSILYN JUSTICE  CHARISMA NEWS
As decades-old accusations accosted Brett Kavanaugh ahead of his confirmation hearing for the Supreme Court of the United States, charismatic leaders defended the character of a man they say has served with an unblemished career.
Dr. Christine Blasey Ford alleges Kavanaugh physically and sexually assaulted her in the 1980s at a high school party. Kavanaugh vehemently denies this allegation.
Another woman, Deborah Ramirez, says Kavanaugh exposed himself to her at a party at Yale when he was inebriated.
Despite the allegations, scores of women have rushed to Kavanaugh’s defense.
Get Spirit-filled content delivered right to your inbox! Click here to subscribe to our newsletter.
In a letter to the Senate Judiciary Committee, Kavanaugh’s 65 former classmates are throwing their support behind the 53-year-old nominee, insisting the charges are false.
“We are women who have known Brett Kavanaugh for more than 35 years and knew him while he attended high school between 1979 and 1983. For the entire time we have known Brett Kavanaugh, he has behaved honorably and treated women with respect,” read the letter. “We strongly believe it is important to convey this information to the committee at this time.”
Charismatic leaders say they want to be empathetic toward victims of assault, but they have concerns about the accusers’ stories.
In a statement to Charisma News, President Donald Trump’s faith adviser Paula White Cain says, “I am sensitive to anyone who has ever been through sexual abuse and trauma (as part of my own background) and pray they find the help and healing to lead a stable life. Nevertheless, these allegations leveled against Judge Kavanaugh 35 years ago certainly have a lot of suspicion, with significant gaps, little memory, no eyewitness, contradicting testimony as to whether Kavanaugh was even present and uncharacteristic alleged behavior to his lifetime patterns and good reputation. It makes it difficult to not believe this is a smear campaign and tactic to delay the appointment of why most conservatives voted President Trump into office, i.e, judiciary appointments.”
Rev. Samuel Rodriguez, the president of the National Hispanic Christian Leadership Council issued a similar statement.
“While we are sensitive to the claims of sexual misconduct, and what amounts to no less than attempted rape, we must also hold these very serious allegations in balance with the truth we know and can prove. If Judge Kavanaugh is guilty, then he should rescind his nomination and he should not sit on the Supreme Court. But what if these allegations are ultimately proven to be false? What should the consequences be for his accusers?” Rodriguez says.
“As Americans, we presume innocence until proven guilty—especially when dealing with allegations that lack contemporaneous corroborations from nearly four decades ago against a man who by all other accounts has lived an outstanding life. Unless new evidence comes to light, I fully expect Judge Kavanaugh to become the next associate Justice of the Supreme Court,” Rodriguez says.
They are not the only ones standing by Kavanaugh until concrete evidence comes forward.
“God is going to get the glory and vindicate those who stands for truth and righteousness,” says Hakeem Collins of Hakeem Collins Ministries. “Brett Kavanaugh will endure this process, and I believe he will overcome and be nominated in spite what the enemy is trying to block him but as Brett Kavanaugh stated recently, ‘Such grotesque and obvious character assassination—if allowed to succeed—will dissuade competent and good people of all political persuasions from service.’ These accusation smears are to keep people from public office, and I believe this has entered the church world, those who are appointed and called to serve as servant leaders. We must pray for those in authority (1 Tim. 2:2).
Collins offered biblical responses believers can take as they seek the truth among reports.
1. Cry out to the Lord. He hears you in your distress. You are not alone and He is aware of what is happening. The Lord will hear when I call on Him (Ps. 4:3)
2. Meditate, be still and put your trust in God. Sit quietly before the Lord and allow Him to direct your thoughts and actions. Ask for wisdom in terms of what to do. Meditate with your heart on your bed and be still (Ps. 4:4).
3. “Be angry and do not sin” is the directive. Anger is acknowledged as a real emotion that rises up when we are falsely accused, but the challenge is to feel that anger and not sin in response to it. This often takes great control only possible through the Holy Spirit in you. In the morning, I will direct it to you (Ps. 5:3).

Other popular leaders recognize the sin in jumping to conclusions against Kavanaugh.
“False accusations are an offense against God as well as the one being falsely accused,” says author and speaker Robin Bertram. “The accusations against Judge Kavanaugh are dangerous.
“Unsubstantiated accusations are not to be believed or received. If we choose to accept baseless accusations our entire judicial system will be destroyed. Our judicial system demands that there be corroborating testimonies; and therefore, we should accept nothing less,” Bertram says.
“When we do stand for truth, we will see it in the midterms. We will see conservatives take their place in our government. We will see conservatives rise up and lead us away from the evils are meant to destroy our nation. We will see our nation and our people prosper,” Bertram says.
Mike Evans, founder of the Friends of Zion Museum, sees the accusations as a radical attack by the left.

The Latin phrase is: Incumbit probatio qui dicit, non qui negat. Its simplest translation is “innocent until proven guilty. The liberal media has turned that declaration on its proverbial head in the wake of the unfounded charges levied against Supreme Court nominee Brett Kavanaugh.
For years, that same media had given a pass to liberal left icons such as Bill Clinton, Harvey Weinstein, Matt Lauer and Charlie Rose—just to name a few. When those allegations could no longer be ignored, the media wrung its collective hands when forced to report the downfall of their darlings.
With the allegations regarding Kavanaugh as related by not one but two women who over-imbibed during high school and college parties, the media has gone into full hypocrisy mode. Reporters are trying to conceal their glee when talking about the possibility that the nomination will be withdrawn or that the nominee will be rejected. Every newscast and newspaper article brings another declaration of the judge’s guilt and his imminent downfall. Like angry, swarming fire ants, the Democrats have fought for a spot on television talk shows.
Dissenting voices mean nothing to the media in overdrive. It has launched a witch hunt and will stop at nothing to convince listeners that the allegations are true. Never mind that they were accused by two individuals who cannot seem to remember the what, when and where of the purported attacks—only the who!
One of the assumed victims of these past assaults is now attempting to set the rules for testifying during the hearing. One such rule is that she will not face Kavanaugh in the room. Had he been charged in a court of law, the Sixth Amendment would guarantee his right to face his accuser. Since he is in a confirmation setting, he is not covered by that law.
The question that plagues me and others is why California Democrat Diane Feinstein sat on the letter from Kavanaugh’s accuser for two months, only to have a sudden flood of conscience just days before the confirmation vote. While the media salivates, the Democrats prevaricate. It is infinitely effortless to levy unprovable charges and ruin a person’s reputation. It is no wonder that highly qualified men and women hesitate to run for office.
Members of the media have clearly shifted from reporting news to making news and working to sway listeners to their opinions. We saw that during the last presidential election, and we’re seeing it now with the treatment of the judge. Like Clarence Thomas and Robert Bork before him, Kavanaugh has been targeted and smeared by the liberal left media.
Untrue allegations stick like permanent ink to a white shirt. The real losers are all who uphold the rule of law and fairness.

Kavanaugh’s next confirmation hearing is scheduled for Thursday.
This story will be updated. Please check back for more information.
Jessilyn Justice @jessilynjustice is the director of online news for Charisma.
Love For His People, Inc. founded in 2010 by Steve & Laurie Martin. Charlotte, NC USA