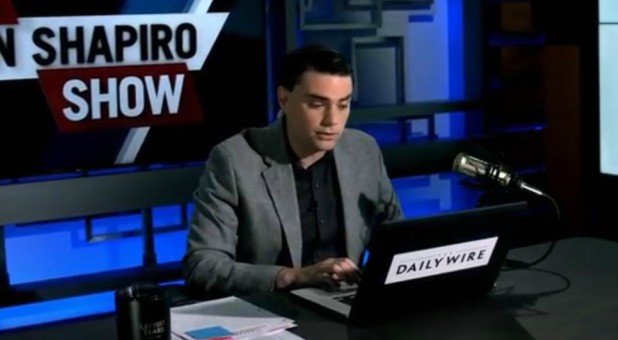 9/24/2018 BILLY HALLOWELL/FAITHWIRE
Conservative commentator Ben Shapiro shows no fear when he tackles some of the most controversial issues of the day. Abortion is just one of the topics he frequently addresses with passionate fervor; it’s an issue that he firmly believes is “the great moral issue of our time” and one for which history will ultimately judge our society.
Read Also: Lila Rose Reveals What Changes People’s Minds on Abortion
“There are very few issues where you can confidently look forward 100 years and say people are going to look back at us and say we’re barbarians — people are going to look back at us and say that we’re engaged in an act of great moral evil,” he said.
He said that people are “capable of great evil” when they don’t think about what they’re engaged in. As time progresses, he believes abortion will be an issue that will eventually be seen for what it is, as science will further change the dynamics at hand.
Get Spirit-filled content delivered right to your inbox! Click here to subscribe to our newsletter.
“As science develops, as we are able to get better pictures inside the womb, as we realize the innate value of every human life that that springs from conception, it’s going to be harder and harder to defend this stuff,” he said. “And I think frankly it’s obvious right now.”
Listen to Shapiro reveal why he’s so passionate about fighting abortion:
Shapiro said there’s a great deal of willful denial that comes along with the abortion debate.

“I think you have to be willfully blind to take seriously the Democratic position that you should be able to murder a baby up to the point that it exits the birth canal,” he said.
Read Also: ‘Duck Dynasty’ Star Reacts to Reporter’s Shock Abortion Question
Shapiro said he can’t believe that abortion is still defended by so many, calling it “beyond … evil” and “crazy.” Unfortunately, he said there are a lot of people today who simply don’t want to see the realities at hand.
“I think there are a lot of people who have bought into the idea that it’s a some sort of imposition on a woman’s body to talk about the person growing inside her,” he said. “And anytime you make a moral argument it’s inconvenient.”
As Pure Flix Insider previously reported, some pro-life activists have seen success in changing people’s minds on abortion. During a recent episode of PureFlix.com’s “Pure Talk,” Lila Rose, founder of Live Action, explained her experience.
“People are living in the lie today … the good news is, the truth sets people true,” Rose said. “That is the way that we’ve seen people change—when they actually know what’s happening through the story. They know what abortion actually is.”
If you’re looking for more inspiration, PureFlix.com offers thousands of uplifting Christian movies, TV shows and original programs that you can watch at home at no cost during your one-month PureFlix.com trial.

This article was originally published on Pure Flix Insider. Visit Pure Flix for access to thousands of faith and family friendly movies and TV shows. You can get a free, one-month trial here.
Get Spirit-filled content delivered right to your inbox! Click here to subscribe to our newsletter.
Love For His People, Inc. founded in 2010 by Steve & Laurie Martin. Charlotte, NC USA