Monday, September 17, 2018 |  Dr. Edy Cohen  ISRAEL TODAY
Syrian media reported on Saturday night that Israel had attacked targets near the airport in Damascus. Those following the wide Arab media have noticed that Israel is averaging a strike against Syria about every two weeks.
The Israeli army itself recently backed up this conclusion by revealing that it had carried out over 200 attacks against targets in Syria over the past 18 months.
The Israeli strikes rarely target the Syrian regime or its forces (the exception being Syrian air defenses), and are instead focused primarily on Iranian and Hezbollah deployments and weapons stores.
Israel’s red lines are clear. It will not allow Hezbollah to take possession of weapons that alter the strategic balance of power. Israel has vowed publicly to thwart any shipment of such weapons that might reach Hezbollah via Syria.
Images of the past weekend’s strike sent to Dr. Cohen via Twitter: 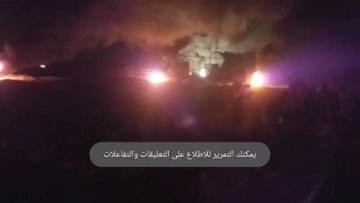 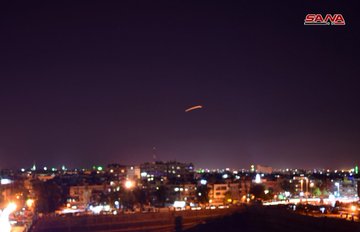 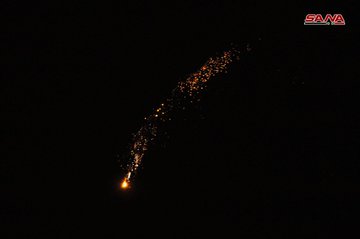 Twitter Ads info and privacy
So, how has Israel managed to carry out so many strikes with relative impunity?
The attacks are usually launched at night so that the damage can only be fully assessed the following day. And Israel almost never claims direct responsibility for the strikes, instead citing Arab media regarding the outcome.
The regime of Syrian dictator Bashar Assad, too, is in no hurry to directly blame Israel. For instance, Syrian television reported two weeks ago that an electrical short-circuit had resulted in a fire that destroyed a military airport in the Almaza region. However, leaked videos from the scene suggested the facility had been bombed. The regime quickly altered the official version of events, insisting that an accidental explosion at an arms depot had been the cause.
One reason that the Assad government might be reluctant to call out Israel is a presumed tacit agreement between Jerusalem and Moscow. Russian President Vladimir Putin is said to be fed up with Iranian involvement in Syria and the resulting proliferation of Shi’ite militias and ideology.
Israel, in turn, maintains ambiguity so as to not embarrass Assad and force his hand.
In addition to the aforementioned frustration with the targeted Iranian forces, Russia remains mum to avoid admitting they know about the Israeli incursions and yet do nothing to defend the territorial sovereignty of their Syrian allies.
All of this has combined to put Assad between a rock and a hard place.
The Syrian leader must dismiss the reports of Israelis strikes, or claim he repulsed them, so as not to appear weak. And he can’t respond militarily knowing that Israel would only hit back even harder, possibly threatening his very rule.
The Iranians, too, don’t say much regarding their loses in Syria at the hands of Israel. Officially, Tehran only admits to having a “handful” of military advisers in Syria, and so can’t make too big a show of its fallen “martyrs.”
The goal now is keeping Assad in power.
With the war in Syria wrapping up in the form of a victory for Assad (thanks to the assistance of his Russian and Iranian allies), both Israel and the Western world have realized there will be no regime change.
Just a few years ago, everyone was insisting the Syrian civil war could only conclude with Assad’s ouster. Israel has the ability to cause the Syrian regime’s collapse, but it is now clear that doing so would lead to total chaos as dozens, perhaps even hundreds, of factions vied for power, sending millions more refugees to Europe.
Dr. Edy Cohen is an expert on Middle East affairs and a frequent guest on Arab media. Dr. Cohen uses his Arabic-language Twitter profile with over 70,000 followers to engage with people across this volatile region.
Want more news from Israel?Click Here to sign up for our FREE daily email updates
Love For His People, Inc. founded in 2010 by Steve & Laurie Martin. Charlotte, NC USA

“We will avoid many national catastrophes because of the proper honoring and care of Israel that our new president will see to.” Johnny Enlow – HE ELIJAH LIST

Priestly and Kingly Intercession-Both are Needed GH15 Day 18 – Give Him 15: Daily Prayers with Dutch Sheets

The Deep Divisions Within The Church | Lance Wallnau

Bill Yount: “This Is The Moment You Were Born For!”

Time for a Severe Shaking —Give Him 15: Daily Prayers with Dutch Sheets

SIDNEY POWELL IN HER OWN WORDS by Mario Murillo Ministries

Did The Prophets Fail By Forecasting Trump Will Win The Election? | Mario Murillo