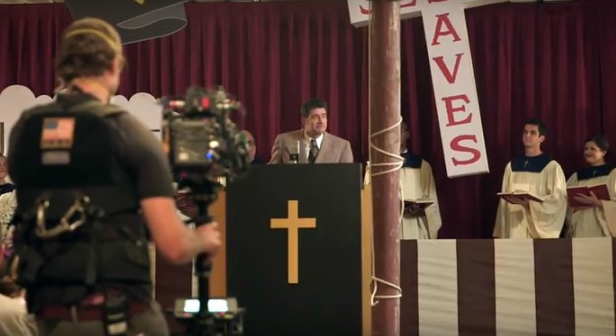 How Will Graham Prepared to Play His Grandfather, Billy Graham, in ‘Unbroken’

9/14/2018 DeWayne Hamby Charisma News
Will Graham, grandson of famed evangelist Billy Graham, stepped in front of the cameras in Unbroken: Path to Redemption to play a crucial part in the life story of Louis Zamperini, Olympic runner and prisoner of war.
The film, a “spiritual sequel” to the 2014 Unbroken, was directed by Harold Cronk (God’s Not Dead, God Bless the Broken Road), produced by Matt Baer and executive produced by Luke Zamperini, son of the main character.
Zamperini, played in the film by Samuel Hunt, battled alcoholism and post-traumatic stress disorder after returning to the states following his time in a Japanese prison camp, but eventually turned his life to Christ at a Billy Graham tent crusade.
“I’m grateful to have a chance to play my granddad and to tell the bigger story of how God changed Louie and Cynthia’s (lives),” Graham said.
Graham, who is quick to point out that he’s “not an actor,” studied his grandfather’s sermons, which he said often were as quick as a “machine gun,” with the evangelist rarely taking a breath.
“He went eight weeks, preached every day, and twice on Sunday, and so I didn’t get to listen to all those sermons, but I try to pick out the few that were meaningful to Louis,” he said. “Actually, we used his sermon as my script in the movie.”
Luke Zamperini, whose character appears as an infant in the film, never knew his father before his conversion, but jokes that he saw flashes of his anger when he was disciplined. He’s grateful for the chance to continue telling his father’s story, specifically his transformation.
“I’m disappointed that we couldn’t tell the whole story in the first [film] but elated that we’re able to tell it in Unbroken: Path to Redemption,” he said. “Because this was the right team to tell this part of the story to focus on his struggles with PTSD and being able to overcome that through faith in Christ at the preaching of Will’s grandfather.”
Unbroken: Path to Redemption releases Friday from Universal 1440 Entertainment, The WTA Group and Pure Flix Entertainment.
To see an exclusive interview with Graham and Zamperini, watch the video.
DeWayne Hamby is a communications specialist and longtime journalist covering faith-based music, entertainment, books and the retail industry. He is also the editor of the White Wing Messenger, director of communications for the Church of God of Prophecy, and author of the book Gratitude Adjustment. Connect with him at dewaynehamby.com or on Twitter, @dewaynehamby.
Love For His People, Inc. founded in 2010 by Steve & Laurie Martin. Charlotte, NC USA