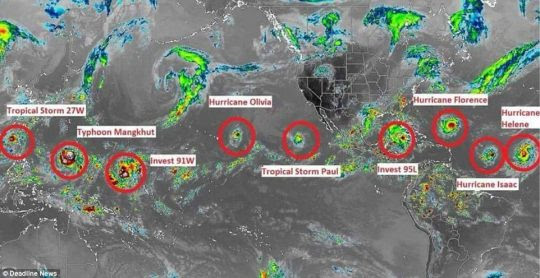 A Record 7 Named Storms Are Swirling Across The Globe – Has ‘The Day After Tomorrow’ Arrived?
Posted: 13 Sep 2018 Michael Snyder
Is something extremely unusual happening to our planet?  At this moment, Hurricane Florence is just one of seven named storms that are currently circling the globe.  That matches the all-time record, and it looks like that record will be broken very shortly as a couple more storms continue to develop.

Back in 2004, a Hollywood blockbuster entitled “The Day After Tomorrow” depicted a world in which weather patterns had gone mad.  One of the most impressive scenes showed nearly the entire planet covered by hurricane-type storms all at once.  Of course things are not nearly as bad as in that film, but during this hurricane season we have definitely seen a very unusual number of hurricanes and typhoons develop.  As our planet continues to change, could this become “the new normal”?

As I mentioned above there are currently seven named storms that are active, but an eighth is about to join them, and that would break the all-time record…

The Hurricane season is causing devastation from the Pacific to the Atlantic as seven active storms are currently swirling across the globe – with high chances an eighth powerful storm will soon develop to break an all-time record.

And actually there is an additional storm that is also developing in the Pacific which could bring the grand total to nine.

Overall, there have been 9 named storms in the Atlantic and 15 names storms in the Pacific since the official start of the hurricane season.

That is not normal.

In fact, one veteran meteorologist has said that he has “NEVER seen so much activity in the tropics”…

Far from being the biggest threat facing the US coastline this hurricane season, Florence will be followed by several other storms that rapidly strengthening in the Atlantic. As one veteran meteorologist remarked, “in my 35 years forecasting the weather on TV, I have NEVER seen so much activity in the tropics all at the same time.”

Meanwhile, the biggest storm on the planet is actually in the Pacific Ocean.

Super Typhoon Mangku is a Category 5 hurricane, and it absolutely dwarfs Hurricane Florence…

The devastating force of Hurricane Florence is nothing when compared to the category 5 hurricane sweeping over the Pacific Ocean, Super Typhoon Mangkhu.
With winds close to 180mph, the fierce hurricane is feared to land over a mountainous terrain in the northern Philippines on Friday night, before moving over the South China Sea and potentially impacting Hong Kong and Vietnam.

But let’s not minimize the seriousness of Hurricane Florence.  It is currently approximately the size of the state of Michigan, and even though it has been downgraded forecasters are still predicting that it will bring up to 40 inches of rain in some areas.

One meteorologist ran the numbers, and he determined that if the current forecasts are accurate the state of North Carolina could end up getting ten trillion gallons of rain…

Weather.us meteorologist Ryan Maue crunched some numbers and tweeted that North Carolina’s 7-day rainfall forecast by the National Weather Service’s Weather Prediction Center would be like getting “a total of over 10 trillion gallons” of rain from Florence. The math was based on the projected state average of 10.1 inches of rainfall for that time span.

Yes, you read that correctly.

Needless to say, all of that water is going to cause an immense amount of damage.
Over in Virginia, a top official is warning that “there could be a number of dams that will fail”…

In neighboring Virginia, officials with the state’s Department of Conservation and Recreation have identified some 100 dams they are concerned could be at risk, either because of “spotty inspection records” or because they are still being built.
“If we get 20 inches of rain in a relatively short period of time,” Russ Baxter, the department’s deputy director told the WSJ, “there could be a number of dams that will fail.”

As I write this article, some areas along the coast are already getting hammered.  Atlantic Beach has received more than 12 inches of rain, and other towns are already inundated with water.

It is going to be a long couple of days for those living along the Mid-Atlantic coast, and there were reports of panic among those making last-minute preparations…

A rowdy crowd was shown in a Facebook video shared by an employee from the supermarket off Glenn School Road in Durham Tuesday pushing one another and shouting as they hurried around the store to gather their supplies.
Police officers were even spotted making their rounds around the Walmart to ensure the safety of shoppers.
One officer is seen restraining a young boy as another shopper drops several bottles of water.

This is yet another example that shows that you never wait until the last minute to get what you need.

In the end, the damage to property will be in the tens of billions of dollars, but only a handful of people will probably lose their lives.

Now that the storm has been downgraded, some are even booking rooms along the coast so that they can say that they rode the storm out.

For instance, 53-year-old Barry Freed says that he is sticking around so that he can cross this off his “bucket list”…

For Barry Freed, 53, riding out a hurricane was a chance to cross something off his “bucket list.”
Armed with a few sodas, some M&Ms, Doritos and a copy of Moby Dick, the Greensboro resident booked an AirBnB at a condo here.
As skies darkened Thursday and winds whipped up at Waterway Lodge, just off the marina near Wrightsville Beach, Freed admitted he wasn’t really prepared.
“I kind of thought of this impulsively,” he said. “It’s kind of a stupid idea.”

Yes, it probably is a stupid idea, but I admire his courage.

This storm will come and go, and the recovery will take an extended period of time.

But the much bigger story is what is happening to our planet on a larger scale.  These storms are increasing in number and intensity, and that should definitely alarm all of us.

About the author: Michael Snyder is a nationally syndicated writer, media personality and political activist. He is publisher of The Most Important News and the author of four books including The Beginning Of The End and Living A Life That Really Matters.

The post A Record 7 Named Storms Are Swirling Across The Globe – Has ‘The Day After Tomorrow’ Arrived? appeared first on The Economic Collapse.