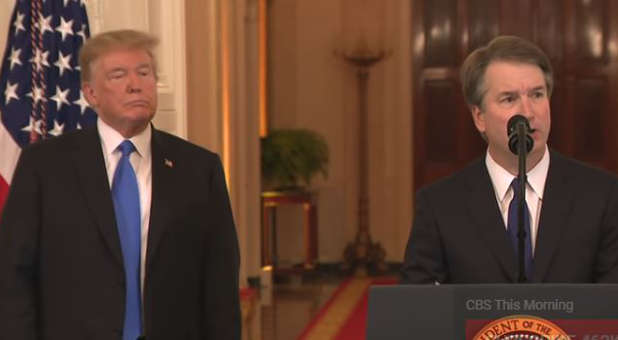 8/20/2018 ACLJ STAFF  CHARISMA NEWS
Taxpayer-funded Big Abortion is spending a small fortune to buy anti-Judge Brett Kavanaugh ads.
We told you how the pro-abortion left was losing its collective mind at the president’s nomination of Judge Brett Kavanaugh for the U.S. Supreme Court. This was not surprising given the fact that Judge Kavanaugh is an incredibly intelligent jurist with a proven record of unwavering commitment to the rule of law.
Judge Kavanaugh is also the thing that perhaps scares the left the most: a man of faith.
Big Abortion immediately went into panic mode, lighting up their base on social media with fearmongering and warnings that Judge Kavanaugh’s confirmation would spell the end of their world.
Now, just weeks from the start of September’s Senate confirmation hearings for Judge Kavanaugh, sources report Planned Parenthood has launched a desperate six-figure campaign to buy anti-Judge Kavanaugh advertisements.
Planned Parenthood announced this media buy in conjunction with its new #DearSenators initiative. #DearSenators is yet another Planned Parenthood website where it is sharing stories it claims are from supporters who would be affected by the confirmation of a pro-life justice such as Judge Kavanaugh —whom they disingenuously call “unfit to serve” on the Supreme Court.
The ads will specifically be aimed at several senators, including Republicans Susan Collins of Maine and Lisa Murkowski of Alaska, both considered swing votes in the past.

Pricey anti-Kavanaugh television commercials will run in Main and Alaska, and digital ads will be run across the country.
Of course, the rub is since Planned Parenthood receives a half-billion dollars in taxpayer support every year, the American people are subsidizing and essentially paying for these ads—along with the hundreds of thousands of abortions Planned Parenthood performs each year—whether they like it or not.
We just told you about Planned Parenthood’s massive new online propaganda campaign called “Unstoppable” to activate its supporters and attack life. This initiative—featuring flashy imagery and pop music by pro-abortion artists and celebrities—urges followers to sign a “manifesto” essentially stating they support taxpayer funded abortion and will stand against pro-life candidates and lawmakers.
Big Abortion knows its empire is crumbling, which is exactly why it’s mounting this new campaign to rally their troops and put them on the offensive. These campaigns cost money. And we know where Planned Parenthood gets its funding—the American taxpayers.
This foolishness has to stop. The American people should not be forced to pay for one more abortion, let alone Planned Parenthood’s deceptive pro-abortion ad campaigns.
The ACLJ is directly engaged in numerous cases to defund Planned Parenthood and cripple the Big Abortion machine—including an amicus brief we recently filed at the Supreme Court to defund and defeat Planned Parenthood. We need you to take action with us.