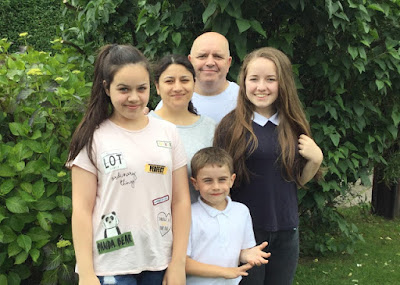 JAMES CLINT FAMILY UPDATE
UK – Northern Ireland  Aug. 2018
Aug. 13, 2018
1st Thessalonians 5:24
Faithful is He who calls you, and He also will bring it to pass
The LORD is indeed faithful to those whom He’s called to serve Him. We can say that without any shadow of a doubt. As many of you know we collect humanitarian aid to send out to needy Jewish families making Aliyah from Russia. The amount of aid we’ve collected recently has shown us The LORD’s faithfulness towards His people Israel.
Recently we’ve had a lot of aid arrive from Southern Ireland, people from as far away as Tralee on the south western tip of Ireland have donated second-hand clothing to bless the Jewish people. Help for Jewish families has also arrived from Kilkenny, Athlone, and Drogheda. Until now I’ve been collecting the aid in my own car. Please pray that we might obtain a van to collect larger loads.

Aid which recently arrived from Southern Ireland
It’s ironic that the Irish government has recently voted to boycott Israeli products from Judah and Samaria, and yet we have small pockets of Irish Christians collecting aid for the Jewish people. Please pray for us as we share about both Ezra UK’s Aliyah work, and the Aid to Israel program here in Ireland.
Bangor Worldwide Convention
From August 27-31  I’ll represent Ezra UK at the annual ‘Worldwide Convention’ in Bangor Co Down Northern Ireland. Around 70 Christian organizations will be represented at the week-long convention. The event draws thousands of Christians interested in supporting various Christian ministries. Pray that the LORD will use our team to inform Christians of the need to support the Aliyah of the Jewish people home to Israel. Pray also for good conversations with those who don’t really understand the LORD’s promises to His people Israel.
Helping the Jewish people home
We’d like to thank everyone who supports this important work both through prayer and giving. Please consider supporting the Aliyah of the Jewish people home to Israel.
Blessings…. The Clint family
Website: www.ezrauk.org
Facebook: facebook.com/EzraUk/
E-mail: ezra.ni@yahoo.com
Love For His People, Inc. founded in 2010 by Steve & Laurie Martin. Charlotte, NC USA