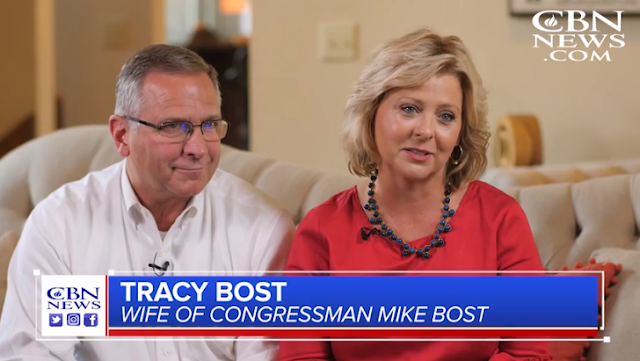 When Tracy Bost, wife of Rep. Mike Bost (R-IL), first set up a PO box for people in her district to

send prayers to the president, she was hesitant to go back and check it fearing no one would send
anything. But to her great surprise, hundreds of prayers poured in. Letters Came in the ‘Hundreds’: The Prayer Notes the President Reads ‘Every Day’ Trump and the Age of the Correspundit

Tracy first came up with the idea when she and her husband, Mike, attended the 2017 GOP retreat
in Philadelphia.

An Idea Born After Witnessing Anger and ‘Pure Ugliness’

“There was so much protest going on and so much anger and just pure ugliness,” recalled Tracy.

She wanted to do something to encourage the new commander-in-chief.

“I just kept praying, ‘God what can I do? What can I do?'” said Tracy. “The prayer card came to mind.

That we could just have people in my life, friends and family members, send a little prayer of
encouragement to the president.”

They set a goal of 100 prayers and asked people to send them on 3×5 notecards. Six weeks later, they

had received almost 300. Her husband asked a White House liaison to deliver them to President Trump.

“I handed them to him and said look, we don’t want any [thing], just give them to him okay?”

A couple of months later, Bost joined a few other congressmen in the Oval Office for a bill signing.

President Trump Says, ‘We Use Those’

“The president looks at me and goes ‘Bost. Bost.’ He said, ‘prayer cards!’ and I said ‘yeah, Mr. President.

My wife did that and circulated prayer cards.’ And he said, ‘We use those.’ And I said, ‘Good I’m so
glad, that’s wonderful,'” recalled Bost.

The president then asked an aide to grab the bag of cards off a shelf so they could take a picture.

“He said, ‘understand, we use these,’ and I turned and when I turned I ran, honest to goodness,

chest-to-chest with the Vice President and he goes, ‘Mike he’s not joking, we use these,'” explained
Bost. “‘They’ll be times we say okay, and we reach out and we grab them. It’s amazing that people
are willing to put these together.'”

Tracy was elated to learn he actually reads the cards.

“I cried and I still get emotional about it,” she said. “I’m thankful that every day he gets to put his hand

in that bag and I know the right card for that day is the one he puts in his hand.”

Teacher Andrea Deming’s students who wrote cards were thankful, too – even those who told her

scripture that you would like to say that’s positive,” said Deming. “We strongly encouraged them to
keep it positive and they all did. There were none that were rude or anything in that matter.”

CBN News she was worried about President Trump because she didn’t know where he stood spiritually. She says this experience has eased her concerns.

She believes there is power in believers joining together to send prayers to our leaders.

Bost: Prayers an ‘Integral Part of the Job’

issue, complain about the issue, and then don’t do anything about it,” continued Ortiz.

Congressman Bost says prayers and faith are an integral part of his job.

prayer and support of other people,” said Bost.

“There’s never a day, never a morning, never sometimes during the day of any day that we’re there

that there’s not at least one or two Bible studies or prayer groups that meet,” says Bost. “I was so
overwhelmed with the amount of faith in DC.”

Prayers Now Coming from All Over America

them from all over the country.

Tracy encourages people not just to write prayers to the president, but also the vice president, the first

lady, or any other leader God is putting on your heart – like a mayor, city councilman, or state senator.