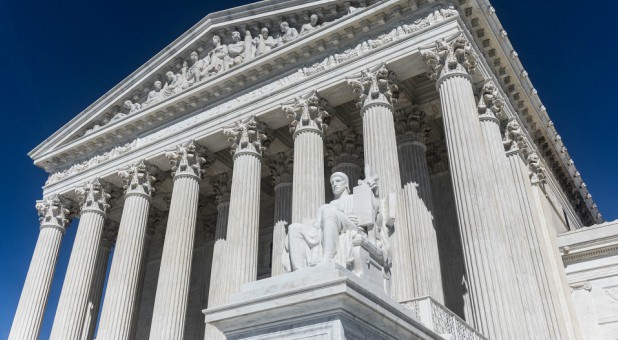 7/11/2018 SHAWN BOLZ  CHARISMA NEWS
God has a blueprint for justice for America, and Supreme Court justices are part of it.
One of my favorite quotes is “Justice is God’s correction of every violation of love.” —Jennifer Toledo”
I am always careful writing prophetic perspectives when it comes to politics because I have so many friends are in every type of political viewpoint or arena, but this is an important day for the Supreme Court of America.
When you look at America at face value, we are full of problems, division and huge justice issues. When you look with God’s eyes, though, you start to see how He has a plan through His great love to correct injustice, and we can partner to this plan. He isn’t as focused on what is not happening or in what areas humanity is failing. Jesus already a paid a price for this, He is looking at what His will is, His original plan and design, and His heart of love is searching for people to partner with this. When Roe v. Wade, among other terrible laws, was passed in modern history, God already had a plan in place to correct this, not only morally but legally. He has also been building a message in culture around family, love, marriage and morality that we needed to begin to have in place for the laws to stick.

I felt three years ago that God had three new Supreme Court justices in the next (now current) administration of presidency to pick. Brett Kavanaugh would now be his second appointment, and this appointment doesn’t just affect us, it affects my daughter’s generation. With so many small-interest groups lobbying for new norms that violate biblical patterns, part of our strategy of prayer was appointments into the Supreme Court who would have the good of all the people in their interests, not just these smaller interest groups that are trying to have a loud voice although they represent so few. I feel like before any great outpouring or revival in America we have faced political turmoil, but we have also seen God answer the prayers of America by raising up key figures who kept us in our lane in the nations. Picture Ronald Reagan when we were going through another season of moral and social bankruptcy, and God raised Him up as a fathering voice that caused America to turn at a key time.
I believe Kavanaugh. to be one of these potential appointments. Picture the Supreme Court that is willing to stick to America’s balance versus siding with the massive liberal agenda. With such a volatile landscape where family identity, sexual identity, gender identity and child rights are so important, this might just be one of our biggest answers to prayer in our whole generation.
Let’s pray together for this appointment; it will affect not only your future but your children’s as well. I also want to prophetically state that there is another choice coming. God has a third Supreme Court justice to be put into place within the next four years, and I believe this will be even as important, or possibly more so, than what we are looking at right now.
Kavanaugh is a young man who can be in office for decades, and he needs our prayers now more than ever. God has a plan, and I believe Brett is part of it. Let’s prophesy him into place, but also pray for his heart to come into the very necessary conviction that God intends for him to have with a Spirit of God’s wisdom and Revelation.

Shawn Bolz is the director of Bolz Ministries and the host of “Exploring the Prophetic” Podcast on Charisma Podcast Network.
Love For His People, Inc. founded in 2010 by Steve & Laurie Martin. Charlotte, NC USA