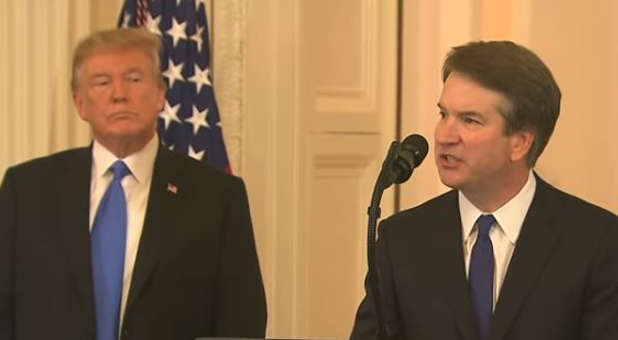 7/10/2018 SHAWN A. AKERS  CHARISMA NEWS
Faith leaders across the country—including Rev. Franklin Graham and Rev. Dr. Samuel Rodriguez—praised President Donald Trump’s nomination Monday night of Judge Brett Kavanaugh as the next justice to the United States Supreme Court.
Trump’s announcement, made to a nationwide television audience, met with a standing ovation from the crowd gathered in the East Wing of the White House. If confirmed, Kavanaugh will replace Justice Anthony Kennedy, who announced his retirement two weeks ago.
Kavanaugh stood among four finalists for the nomination. The others were Raymond Kethledge, Amy Coney Barrett—a charismatic Catholic—and Thomas Hardiman. The choice of Kavanaugh, if confirmed, could shape the judicial landscape of this country for decades to come.
On Facebook, Graham lauded Trump for “keeping” his word to nominate a conservative justice to the high court.
“He promised the American people that if he had the opportunity, he would nominate conservative justices to the U.S. Supreme Court, and he’s done just that,” Graham said. “CNN said it was the “Supreme Court pick for the ages.” Congratulations to Judge Brett Kavanaugh on this monumentally important nomination!
“Those on the progressive, socialist left are, of course, already enraged. Another conservative justice threatens their agendas and the direction they were trying to push this country. They are rallying their forces and had begun protesting even before the announcement was made! We need to thank God for this long-awaited opportunity to change the makeup of the U.S. Supreme Court. And, we need to be faithful to pray for Judge Kavanaugh and his family during the very intense confirmation process.”
Rodriguez, president of the National Hispanic Leadership Conference, said this in an issued statement:

I join millions of Americans in congratulating Judge Brett Kavanaugh on his nomination to the Supreme Court, a well-respected jurist widely regarded for his intellect, temperament, as well as for his dedication to the Constitution. While certainly conservative, Judge Kavanaugh is well within the mainstream of American legal thought and theory.As our duly elected president, the selection of Justice Kennedy’s replacement is President Trump’s decision, and his alone, as mandated by the Constitution. I therefore urge the Senate to not unnecessarily delay or obstruct, but as polling demonstrates the majority of Americans want, to move ahead with a timely and honest confirmation process. I pray for our country in this process, that instead of yet another vitriolic and divisive political battle, the confirmation process would instead be a reaffirmation of the strength of our democracy and its institutions.

Other faith leaders chimed in their approval about Kavanaugh’s nomination:
Jay Sekulow, Chief Counsel for American Center for Law & Justice: “The nomination of Judge Kavanaugh to fill the vacancy created with the retirement of Justice Anthony Kennedy is a superb choice who is certain to serve this nation well. Judge Kavanaugh is a brilliant jurist who embraces the philosophy of our founders—an unwavering commitment to the rule of law and the Constitution. We expect the Senate to exercise its constitutional duty to provide “advice and consent” without delay. While there [are] certain to be biased and vitriolic political attacks directed at this nominee, we believe Judge Kavanaugh’s character, experience and judicial temperament will be well received by the American people. We are confident that the Senate will confirm Judge Kavanaugh, and we look forward to Judge Kavanaugh being seated in time for the start of the Supreme Court’s new term in October.”
Tony Perkins, President, Family Research Council: “For a second time, President Trump has followed through on his promise to select a nominee from the list he presented during the campaign. President Trump promised a constitutionalist—someone who will call balls and strikes according to the Constitution. We trust the president that Judge Kavanaugh will fit this mold as a justice. Judge Kavanaugh has a long and praiseworthy history of judging as an originalist, and we look forward to having a justice with his philosophical approach on the Court.
“From the day Justice Kennedy retired, the left has sought to make this vacancy all about abortion—even though many other significant issues are at stake including religious freedom and free speech. Under the Obama administration, we saw a growing assault on religious freedom and the courts became a battleground for secularists seeking to remove faith from the public square. Judge Kavanaugh resisted this trend in at least two instances—an HHS contraceptive mandate case and in an opinion supporting inauguration prayers. We are committed to working with President Trump and senators to help move the grassroots to gain the confirmation of Judge Kavanaugh.
Mat Staver, Liberty Counsel Founder and Chairman: “President Trump’s nominee of Brett Kavanaugh for the critical vacancy on the Supreme Court could shape America’s legal landscape for decades. Judge Kavanaugh has a distinguished legal career and is committed to interpreting the text and original meaning of the Constitution and statutes. Judges must be bound to the text and original meaning of the law. This simple judicial constraint will prevent the Supreme Court and any court from bending the law to support personal ideologies. The Supreme Court needs to remove itself from political decision-making and personal preferences.”
Jentezen Franklin, Senior Pastor of Free Chapel: “The president has nominated Judge Brett Kavanaugh as the newest associate justice to serve on the U.S. Supreme Court, and I’m thrilled with his choice. Judge Kavanaugh has proven his commitment to faithfully interpreting the law as it’s originally written, respecting every American’s right to life and liberty. The Lord rules the nations with truth and justice, and it gives me great comfort to find men and women like Judge Kavanaugh who make every effort to do the same. I urge the Senate to confirm him without delay.”

Deborah, Esther and Anna carried a profound anointing. Become a Godly woman of boldness, power and strength. Get the Anointing Bundle.
Love For His People, Inc. founded in 2010 by Steve & Laurie Martin. Charlotte, NC USA