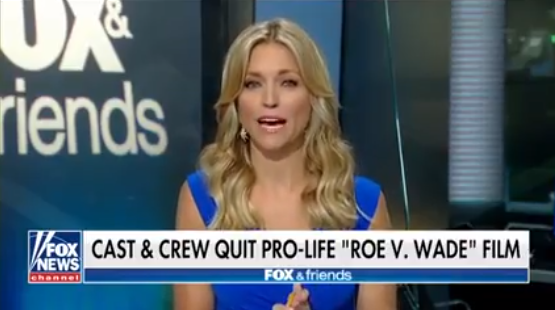 Cast, Crew Walk Off the Set of the True Story

7/5/2018 JESSILYN JUSTICE AND SHAWN AKERS  charisma news
Join us on our podcast each weekday for an interesting story, well told, from Charisma News. Listen at charismapodcastnetwork.com.
Some of the cast and crew walked off the set of a pro-life movie aimed to tell the truth about the infamous Roe v. Wade Supreme court decision.
Nick Loeb, the producer of the project, says a woman walked up to him last week during filming outside New Orleans.
Loeb says the woman asked if he was the director of the film.
“When I told her I was, she told me to [obscenity],” Loeb tells The Hollywood Reporter. “Then she threw her headset on the ground and walked off. I found out later she was our electrician.”
He continued: “We had to replace three local actors, including one who was to play Norma McCorvey, even after she begged for the role.”
Apparently the cast and crew didn’t realize the film had a strong pro-life bent.
For Troy Duhon, the man behind the God’s Not Dead brand, the walk-out is not coincidental. Though the movie has been in production for a few months, the mainstream media just now caught wind of the story thanks to Anthony Kennedy announcing his retirement from the Supreme Court.
“God’s timing is always perfect,” Duhon tells Charisma News. “You think about what [President Donald] Trump’s about to announce on Monday, what is the first major case that’s about to come up? You can’t deny it, it’s going to be the undoing of Roe v. Wade.”
Trump is expected to announce his replacement for Kennedy next week.
Along with pro-life champion Dr. Alveda King, the niece of Dr. Martin Luther King Jr., Loeb has taken on the role of executive producer of Roe v. Wade: The Movie. It is a film he says could radically transform opinions on the controversial issue of abortion and impact millions of lives.
Previous films like Voiceless, Meant to Be and Juno contained storylines centered around abortion. A made-for-television movie starring Holly Hunter, Roe vs. Wade, hit the small screen in 1989.
But Loeb, who has starred in Hollywood films like Extraction, Swing State and Precious Cargo and produced the documentaries The Smokers and The Living Century, says Roe v. Wade: The Movie will uncover hidden facts and expose the lies and manipulations surrounding the Supreme Court’s decision to legalize abortion in 1973.
“No one has ever made a theatrical movie about the most famous court case in history, and certainly no one has ever done a true version of it,” Loeb says. “It’s an issue that most Americans, if they read the news at all, are familiar with.

“This movie is the real untold story of how people lied, how the media lied and how the courts were manipulated to pass a law that has since killed over 60 million babies.”
Loeb says that “80 percent of the dialogue by characters in Roe v. Wade: The Movie is documented in speeches, interviews and publications” and that “everything we put in the movie is 100 percent fact checkable.” Planned Parenthood, perhaps the most powerful driving force behind the pro-abortion movement, is a major theme throughout the film.
The film reveals how Planned Parenthood and abortion advocacy organization NARAL were behind efforts to find a young girl named Norma McCorvey—who eventually became the Roe in Roe v. Wade—about whom “they could manufacture a case to bring before the Supreme Court.”
McCorvey eventually became a pro-life advocate.
Roe v. Wade: The Movie also focuses on Dr. Bernard Nathanson, founder of the National Abortion Rights Action League. It explains how Nathanson, too, reversed his views on the issue and became a pro-life activist, including narrating an anti-abortion documentary in 1984 titled The Silent Scream.
Film co-producer Cathy Beckerman (Alien Abduction, Isolation, The Experiment) says Roe v. Wade: The Movie is a film that bigwigs in Hollywood would prefer kept from the general public.
“Hollywood certainly does not want the truth to be told, and this movie is the truth,” Beckerman said. “They have reduced abortion as an everyday procedure, comparative to going to the dentist. The women’s movement really influenced it, and Hollywood has done everything they can to carry on that agenda.”
Hollywood has countered Roe v. Wade: The Movie with three pro-abortion movies currently in production. Call Jane stars Elisabeth Moss, who recently won two Emmys for her role in Hulu’s The Handmaid’s Tale. The other two, which The Hollywood Reporter says has received a financial boost from Planned Parenthood, are titled Ask for Jane and This is Jane, based on the same illegal abortion network featured in Call Jane.
“We’re hoping to find an angel out there that will help us because we know no one in Hollywood wants to fund this movie,” Loeb says. “We’re confident we will get the funding.”
Loeb says the movie contains no bad language or nudity, but it features two “extremely violent” scenes, one including police walking out of an abortion clinic with “buckets of dead fetuses.” Loeb says two friends of his, both of whom were pro-choice previously, changed their views after reading the film’s script.
Academy Award-winning actor Jon Voight stars in the film as a Supreme Court justice. Stephen Baldwin has also signed on to star in the movie and as an executive producer. King makes a cameo appearance in the film.

The Paradigm: The Mystery of the Heir – Jonathan Cahn on The Jim Bakker Show

Whether to require commenters to complete a Captcha