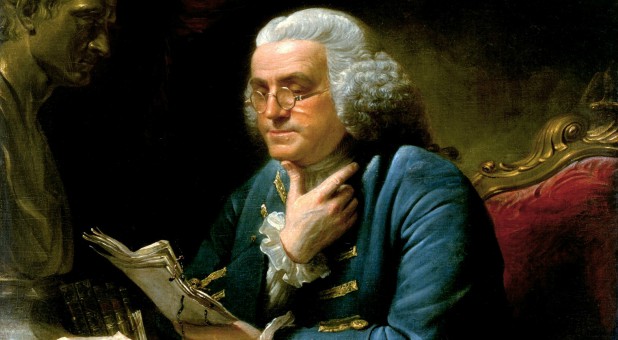 7/2/2018 EDDIE HYATT  CHARISMA NEWS
In a letter dated July 2, 1756, Benjamin Franklin presented a proposal to George Whitefield, the most famous preacher of the Great Awakening, that they partner together to establish a Christian colony “in the Ohio,” which was frontier country at the time.
In the letter, Franklin expressed confidence that God would give them success in such a project, “If we undertook it with a sincere regard to his honor.” He wrote,

“I imagine we could do it effectually and without putting the nation at too much expense. What a glorious thing it would be, to settle in that fine country a large strong body of religious [Christian] and industrious people! What a security to the other colonies; and advantage to Britain, by increasing her people, territory, strength and commerce. Might it not greatly facilitate the introduction of pure religion among the heathen, if we could, by such a colony, show them a better sample of Christians. …” (Hyatt, The Faith and Vision of Benjamin Franklin, 40)?

Friends to the Very End
Franklin had become friends with Whitefield 18 years prior to this when Whitefield visited Philadelphia and preached to massive outdoor crowds. Franklin attended the meetings and was attracted to this young, fiery revivalist who was nine years his junior. It proved to be the beginning of a close, life-long friendship.
Franklin and Whitefield became business partners with Franklin printing and distributing Whitefield’s journals and sermons and advising him in business matters. Whitefield stayed in Franklin’s home on at least one of his visits to Philadelphia and Franklin wrote to his brother in Boston, “Whitefield is a good man and I love him.”
For the next 30 years, they carried on a lively and open correspondence. Whitefield often spoke about faith in Christ and admonished Franklin to make sure he was prepared for the next world. When Whitefield passed away in Newburyport, Connecticut, on Sept. 30, 1770, Franklin was in London. Obviously feeling a deep sense of loss, he wrote,

“I knew him intimately upwards of thirty years; his integrity, disinterestedness, and indefatigable zeal in prosecuting every good work, I have never seen equaled, I shall never see exceeded” (Hyatt, The Faith and Vision of Benjamin Franklin, 44).

Franklin’s Missionary Vision
As a result of this friendship, Franklin moved away from his Deistic leanings and back toward his Puritan roots. The depth of Franklin’s love and respect for Whitefield is demonstrated by the fact that he wanted Whitefield to be his partner in establishing a new colony on the Ohio frontier. Notice that Franklin wanted to populate it with a “religious” and industrious people. When Franklin, or any of the Founders, speak of a “religious” people they are referring to Christians.
Note also the missionary motive Franklin presented to Whitefield. He not only wanted to populate the colony with Christian people, he wanted the colony to be a base for introducing the Native Americans of that region to what he called “pure religion.”
Since he is writing to Whitefield, there can be no doubt that “pure religion” in Franklin’s mind was the evangelical revivalism that Whitefield preached in Philadelphia and throughout the Colonies.
Although time and circumstances did not allow them the opportunity to launch this project, I suggest that Franklin’s vision for a Christian society never died but was fulfilled in the founding of the United States of America, of which he was one of the most important Founding Fathers.

Franklin’s Commitment to Christian Values
Franklin was no fiery evangelist like Whitefield, but he became convinced that only Christianity provided the moral system for a stable and prosperous society. He knew that Christians were far from perfect, but at least they acknowledged a virtuous, moral standard toward which to strive and to which they could be called to adhere.
Franklin’s belief in Christianity as a necessary moral force in society is why he rejected a manuscript from the well-known Deist, Thomas Paine, in which Paine attacked orthodox Christianity. Franklin, in very strong language, urged Paine not to print the book or even allow anyone else to see it. He wrote,

“I would advise you, therefore … to burn this piece before it is seen by any other person; whereby you will save yourself a great deal of mortification by the enemies it may raise against you, and perhaps a good deal of regret and repentance. If men are so wicked with religion [Christianity], what would they be if without it” (Hyatt, The Faith and Vision of Benjamin Franklin, 49).

Franklin Calls the Constitutional Convention to Prayer
Whitfield’s influence on Franklin can be seen at the Constitutional Convention 17 years after Whitefield’s death. When the Convention reached an impasse and was in danger of disbanding without completing its work, it was Franklin, now 81 years of age, who arose and called the convention to prayer.
In his appeal, Franklin quoted from both the Psalms and the Gospels and reminded the attendees how God had answered their prayers during the war. Addressing the convention president, George Washington, Franklin said,

“How has it happened, sir, that we have not hitherto once thought of humbly appealing to the Father of lights to illuminate our understandings? In the beginning of the contest with Great Britain, when we were sensible to danger, we had daily prayers in this room for Divine protection. Our prayers, sir, were heard and they were graciously answered. I have lived, sir, a long time and the longer I live, the more convincing proofs I see of this truth—that God governs in the affairs of men. And if a sparrow cannot fall to the ground without his notice, is it probable that an empire can rise without His aid? We have been assured, sir, in the sacred writings that except the Lord build the house, they labor in vain that build it. I firmly believe this. I therefore beg leave to move that, henceforth, prayers imploring the assistance of heaven and its blessing on our deliberation be held in this assembly every morning before we proceed to business” (Hyatt, The Faith and Vision of Benjamin Franklin, 62-63).

Although his proposal was not “formally” adopted, there was much response on a personal level because of the respect with which he was held. According to those present, “an atmosphere of reconciliation seemed to settle over the convention hall.” Petty grievances and local interests were laid aside, and the delegates went on to complete their task of formulating the U.S. Constitution and Bill of Rights. I think Whitefield must have smiled down from heaven on his old friend!
Yes, Franklin Wanted a Christian America
Modern secularists love to present Franklin as a nonreligious Deist who wanted to keep Christianity out of the public domain. Such a view of Franklin, however, is based on selected quotations taken out of context and without regard for his changing views on God and Christianity as he matured. Such a view also ignores his Puritan heritage and his close friendship with Whitefield.
Franklin, like all the Founders, did not want an official, state church like the nations of Europe. He did however, want a society whose populace would be governed by Christian principles of virtue and morality. This was made clear in his letter to Whitefield, and in this sense, it is clear that Benjamin Franklin had a vision for a Christian America.

This article was derived from The Faith and Vision of Benjamin Franklin by Dr. Eddie L. Hyatt and is available from Amazon and his website bookstore atwww.eddiehyatt.com/bookstore.html. Dr. Hyatt has received a commission to reconnect America with its roots as a nation birthed out of a great, spiritual awakening and to call Americans to pray for another Great Awakening in our day. You can read more about his vision at www.eddiehaytt.com.
Love For His People, Inc. founded in 2010 by Steve & Laurie Martin. Charlotte, NC USA