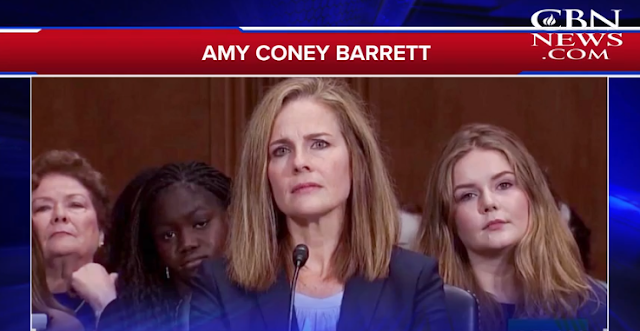 a huge opportunity to shift American laws on issues like religious freedom and abortion. President
Donald Trump has noted he has a list of 25 names as possible Supreme Court candidates, but there’s
one name that pro-lifers seem to really love.

“Many of my sources, evangelical in nature, love her. They believe that she is the one that if they

had their dream pick that she would be the one,” Brody said on the 700 ClubFriday. “Barrett has
been very outspoken of her Catholic views and God.” A Troubling Message to Those Who Want to Serve: ‘Christians Need Not Apply’

Barrett is a mother of seven children and a devout Catholic. At just 46-years-old, Barrett holds

promise for a potential decades-long term on the bench. She once clerked for Justice Antonin Scalia,
taught law at Notre Dame, and has reported conservative views about protecting religious freedom.

“If President Trump appoints a woman who embraces the properly defined role for judges, it will

demonstrate that this approach to judging is compelled by principle and not confined by race or
gender,” said Tom Riddle, Deputy Director of the Edwin Meese III Center for Legal and Judicial
Studies and Senior Legal Fellow.

A Barrett nomination could face a very tough fight in the Senate. Sen. Diane Feinstein (D-CA)

opposed Barrett vehemently during her Senate confirmation battle for US Court of Appeals for
the Seventh Circuit. Feinstein even implemented a religious test, blasting Barrett for her deep
Catholic faith, calling it “dogma.”

“When you read your speeches, the conclusion one draws is that the dogma lives loudly within you

and that’s of concern when you come to big issues that large numbers of people have fought for years,”
Feinstein said.

Barrett had told graduates, “No matter how exciting any career is, what is it really worth if you don’t

make it part of a bigger life project to know, love and serve the God who made you?”

you consider yourself an orthodox Catholic?”

Barrett did finally win approval for that Seventh Circuit post, and earned the votes of a few critical

Democrat senators from moderate states. That could be key in her chances for Senate approval if
she is in fact Trump’s pick to replace Kennedy.

Senators Manchin (D-WV) and Donnelly (D-IN) voted to approve Barrett for the Seventh Circuit, so

Brody reports some believe they might vote for her again.

“Look they already voted for her to be a federal appeals court judge, I understand the Supreme Court

may be different so to speak but they are already on record voting for her,” Brody said.

“I just think you have to go through a process,” Manchin said. “I want qualifications. Somebody