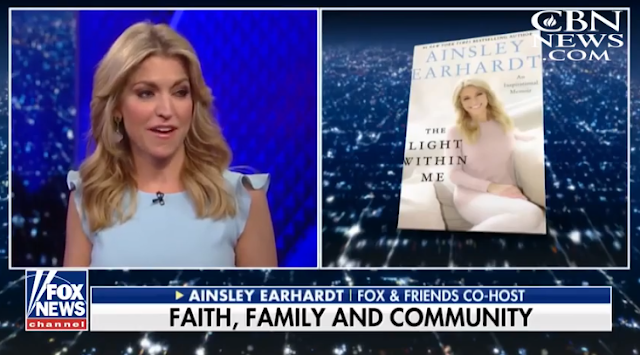 on air and is now sharing the personal details of her testimony in a new memoir.

She remembers when publisher Harper Collins approached her to write it.

“Honestly I thought, well aren’t you like 80 years old when you write a memoir?” she laughed.

Finding Jesus Fills the Void in Her Life

She said she ultimately decided to do because she felt God was leading her to share her story.

Earhardt was born in South Carolina and writes about growing up in a Christian home,

but it wasn’t until college that she came to know Jesus.

“I was in a Bible study, Henry Blackaby’s Experiencing God, and I started to experience God as

I was reading the pages of this workbook and studying scripture with some friends, and we all
just searching to fill that void in our lives,” she explained. It was at a frat party of all places when her life changed forever.

“In the middle of the party I looked around and I just said, ‘I’m tired of this. I’m tired of living this

way and doing this almost every single night in college,’ and I walked outside and sat down on the
stoop and I just said, ‘Jesus, I don’t know how to pray this but will you come into my life?'” she said.

Throughout the book, Earhardt writes about seeking God’s will. That’s what she felt she was doing

while working at a CBS affiliate in San Antonio. Then in 2006, Fox News came calling.

with the bosses here and that they would like me but only if it was God’s will,” she said.

While she landed the job in New York, it took years of working overnights, weekends and travel

before she made it to the Fox & Friends curvy couch.

One of the show’s most loyal viewers is President Trump, who tweeted his support for Earhardt’s

book, calling her a “truly great person” and the book “wonderful.”

“I don’t believe that’s true,” she said. “I asked him some tough questions in that last interview.”

Earhardt says she tries her best to ignore the critics.

“The haters out there, I don’t really pay attention to them because I feel like I’m doing the best

I can and I just don’t want that negativity into my heart and into my mind,” she explained.

Even with her current success, she’s seen lows in her career and personal life, including a

devastating divorce. The year that followed she calls her “Jesus Year.”

Life Turns Around After Devastating Divorce

in a really low point in my life because I was really sad about that,” she explained. “God healed me
so much during that period. So I loved that year because I leaned on God and then as a result, I
started checking things off my bucket list.”

She says she started spending more time with family and friends and traveling. And then she

eventually met her now husband, Will. The two married in 2012. Three years later Earhardt
learned she was pregnant, but the pregnancy ended in miscarriage.

“I got through my miscarriage with God,” she said. “And I just said, you know, I prayed and

prayed that God would give me a healthy baby and the baby wasn’t healthy and wasn’t viable
and so the baby is with God in heaven now and I know I’ll see that baby again’ and I went home
and I just cried that afternoon.”

God Gives Hope for Another Baby

She says God not only got her through that, he gave her hope for another baby.

“She’s such a joy,” Earhardt said tearfully. “I pray that I live a very long life so that I can see her

get married and see her have children one day. She is such a joy. She is such an answer to prayer
and she’s my little miracle. I just I thank God for her daily.”

In terms of what’s next, Earhardt says she’s leaving that up to God.

years old and I’m having the time of my life and I feel like even though I’ve gone through some
difficult times, the majority of my life has just been full of blessings and even the bad stuff,
I’m grateful for. In order to get to the mountain, you’ve got to go through the valley.”

When it comes to her memoir, she says she hopes “people see Jesus.”

“I hope it’s not about Ainsley Earhardt,” she said. “Everything in this book that I have done in my

life is because of God. It’s because I asked him to come into my life and I asked him to steer my
car and to be in the driver’s seat and that’s what he’s doing.”
Watch here: Ainsley Earhardt Interview
Love For His People, Inc. founded in 2010 by Steve & Laurie Martin. Charlotte, NC USA