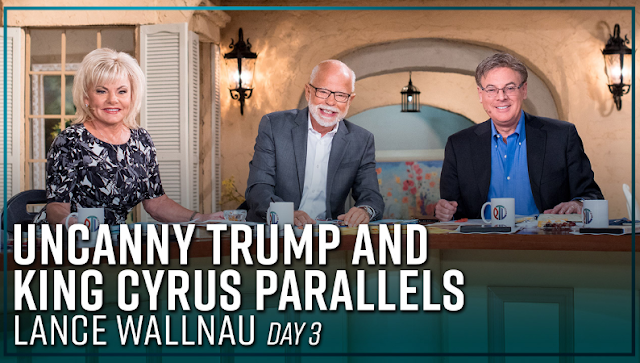 The more informed we get, the more spiritually neurotic we could potentially get. -Lance Wallnau
You show me the man and I’ll find you the crime. In other words, anybody can get something on somebody if they’re authorized by the state. -Lance Wallnau
Christians don’t show up unless they’re concerned. That’s the problem, we get lazy and complacent. -Lance Wallnau

Proverbs 25:28 NIV Like a city whose walls are broken through is a person who lacks self-control.
Ezra 1:2 MEV Thus says Cyrus king of Persia: “The Lord God of heaven has given me all the kingdoms of the earth, and He has charged me to build Him a house at Jerusalem, which is in Judah.”
Nehemiah 2:18 MEV Then I told them that the hand of my God had been good to me and also about the king’s words that he had spoken to me. And they said, “Let us rise up and build!” So they strengthened their hands for the good work.
Matthew 25:32 MEV Before Him will be gathered all nations, and He will separate them one from another as a shepherd separates his sheep from the goats.
Matthew 25:45 MEV “He will answer, ‘Truly I say to you, as you did it not for one of the least of these, you did it not for Me.’”
Esther 9:10 KJV The ten sons of Haman the son of Hammedatha, the enemy of the Jews, slew they; but on the spoil laid they not their hand.
Daniel 9:25 MEV Know therefore and understand that from the going forth of the command to restore and to rebuild Jerusalem until the Prince Messiah shall be seven weeks, and sixty-two weeks. It shall be built again, with plaza and moat, even in times of trouble.
Ezra 4:4-5 MEV Then the people of the land demoralized the people of Judah and terrified them while building, and hired counselors against them to frustrate their purpose, all the days of Cyrus king of Persia, even until the reign of Darius king of Persia.
Acts 9:5 KJV And he said, Who art thou, Lord? And the Lord said, I am Jesus whom thou persecutest: it is hard for thee to kick against the pricks.
Proverbs 14:28 KJV In the multitude of people is the king’s honour: but in the want of people is the destruction of the prince.
Ephesians 1:21 MEV Far above all principalities, and power, and might, and dominion, and every name that is named, not only in this age but also in that which is to come.
Isaiah 41:1 MEV Keep silent before Me, O islands, and let the peoples renew their strength. Let them come near, then let them speak; let us come near together to judgment.
Isaiah 45:1-2 MEV Thus says the Lord to Cyrus, His anointed, whose right hand I have held—to subdue nations before him and to loosen the loins of kings, to open doors before him so that the gates will not be shut: I will go before you and make the crooked places straight; I will break in pieces the gates of bronze and shatter the bars of iron.