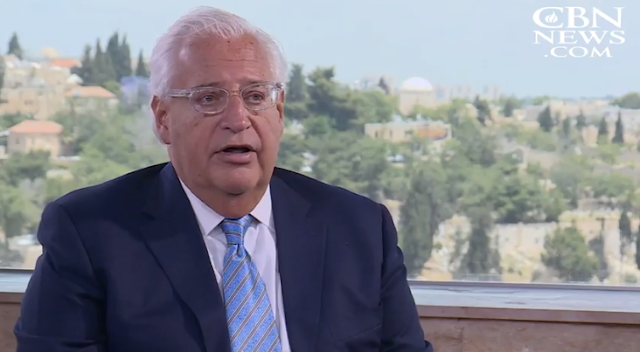 Just one day after the historic move of the US embassy to Jerusalem, CBN News sat down for an

interview with US Ambassador to Israel David Friedman.

would have thought of it. ‘The City of God…Where Messiah Will Come’: US Dedicates Jerusalem Embassy in Historic Event

“My father was of the generation that survived the Holocaust, so the juxtaposition of those great

losses and the creation of Israel had a profound effect upon him, and that’s how I grew up,” Friedman
told CBN News.

Referring to the Jerusalem embassy dedication, Friedman said, “And so to see this happen, as I was

standing there, I couldn’t stop thinking about how proud my father would be and how much I wish
he had lived to see this day.”

He also shared a behind the scenes view of Donald Trump and a story few may have heard.

“President Trump is a very good man, and that’s not a description I give of many people,” Friedman

said. “He’s a good man, he doesn’t get credit for all the good things he’s done.”

going back to my father, when I was mourning my father, I remember it was a day in February,
there was a complete blizzard on Long Island,” he said.

“No one was coming that day because there was this massive blizzard. And all of a sudden, in he

walks. Took him three and a half hours in a car to get out to visit me,” he recalled.

“This was about 13 to 14 years ago, long before politics was on the horizon, nobody was there,

no press, it’s not like he did it for any coverage. And we sat for two hours and he talked about
his father and I talked about my father, and we’re really lucky to have him in the White House,”
he said.

US and the state of Israel.

Christian community, as am I, as is President Trump,” he said.
Watch the interview here: US Ambassador Friedman
Love For His People, Inc. founded in 2010 by Steve & Laurie Martin. Charlotte, NC USA