War with Iran seems more likely than ever, and the United States is about to move its embassy to Jerusalem. But on Sunday morning Israelis could talk of little else than the nation’s victory at the Eurovision song contest.
Eurovision was launched in 1956 as an initiative to bring the nations of Europe closer together following the trauma of World War II. It has since grown into a massive media event with no fewer than 200 million viewers across Europe and the Middle East.
Viewers from every participating country are able to call in to vote for their favorite performances, which means that Israel’s entrant, Neta Barzilai, needed the support of a great many European viewers to bring home the victory on Saturday night.
Prior to the contest, the Boycott, Divestment and Sanctions (BDS) movement worked hard to make sure Neta didn’t garner support outside of Israel.
The effort failed. Big time.
Neta’s song “Toy” was about female empowerment and combatting the phenomenon of sexual harassment, but many saw in it a double message – Israel is not the “toy” of its regional enemies or international antagonists.
Internal Security Minister Gilad Erdan played on that theme in his tweet congratulating Neta:
View image on Twitter 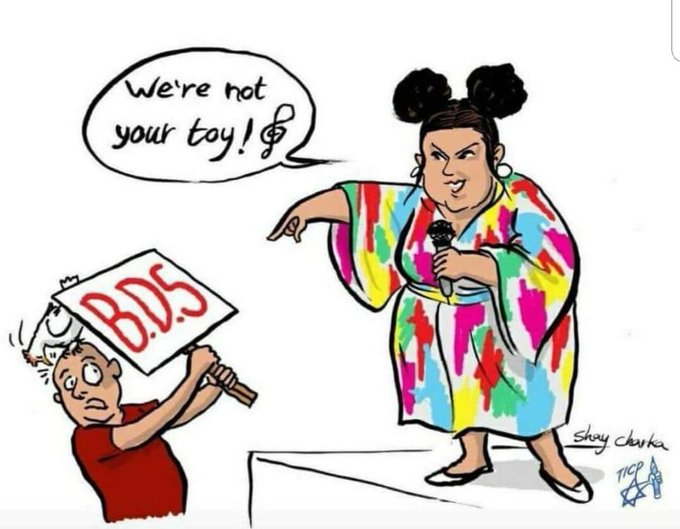 @giladerdan1
I love my country

Twitter Ads info and privacy
The victory means that the 2019 Eurovision contest will be held in Israel, most likely in Jerusalem, giving the Holy City yet another opportunity to shine.
An excited Mayor Nir Barkat told local Hebrew media following Neta’s win: “The city of Jerusalem will grant any help needed in putting up Eurovision 2019 in the capital of Israel and together we will expose the beautiful face of Jerusalem to the whole world.”
Neta also seemed enthusiastic about bringing Eurovision to the Israeli capital, shouting from the stage, “Next year in Jerusalem,” where the world will get a chance to see “how wonderful we are. What a vibe we have. Best people… the best place in the world.”
Below is a replay of Neta’s catchy and quirky contest-winning performance:
Want more news from Israel?Click Here to sign up for our FREE daily email updates
Love For His People, Inc. founded in 2010 by Steve & Laurie Martin. Charlotte, NC USA