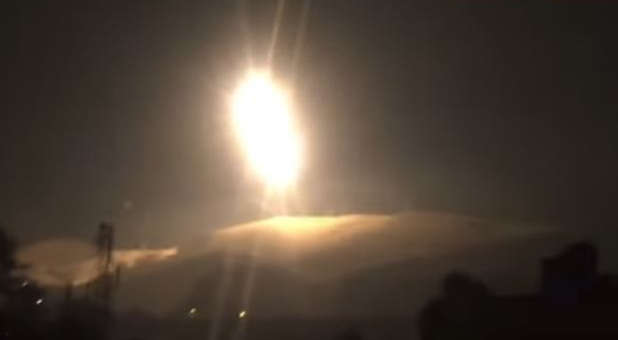 Jewish Rabbi: ‘Things Are About to Get Biblical’

5/11/2018 GEORGE THOMAS/CBN NEWS
Thousands of Iranians took to the streets of their capital and other major cities across the country Friday, chanting, “Down with USA, down with Israel, down with England” following America’s decision to withdraw from the 2015 nuclear deal.
“We must rely on our own capabilities and if we do so, rest assured that we will win, and the West’s domination will not be successful, Gholamhossein Mohseni Ejei, a member of Iran’s judiciary, said.
Amidst chants of “Death to America” and “Death to Israel,” an Iranian religious leader says his nation will continue to develop its missile capabilities.
“The holy system of the Islamic Republic will step up its missile capabilities day by day so that Israel, this occupying regime, will become sleepless and the nightmare will constantly haunt it that if it does anything foolish, Tel Aviv and Haifa will be brought down in ruins and totally destroyed,” said Ahmed Khatami, a member of Iran’s Assembly of Experts.
Iran’s foreign minister Javad Zariff released a statement Friday saying his nation is restarting its nuclear program and “taking all necessary steps in preparation for Iran to pursue industrial-scale enrichment without any restrictions.”
Ayatollah Khatami believes Trump’s decision to pull out of the nuclear agreement is just another sign that America’s only goal is regime change in Iran.
“They have always been after the toppling of Iran’s regime and this exit is in line with that aim,” Khatami said during weekly Friday prayers in Tehran.
He may have some cause for concern. On Thursday, the Washington Free Beacon obtained a document alleging a White House plan to help Iranians topple their government.
“The three-page white paper being circulated among National Security Council officials in the White House offers a strategy by which the Trump administration can actively work to assist an already aggravated Iranian public topple the hardline ruling regime through a democratization strategy that focuses on driving a deeper wedge between the Iranian people and the ruling regime,” the paper reported.
Tensions between Israel and Iran dramatically escalated this week following a salvo of rocket attacks by both sides, leading many experts to warn of a larger conflict in the region.

“It is a possibility that this could be the beginning of an even wider war,” said Chris Mitchell, CBN News’ Jerusalem bureau chief.
On Thursday, Israeli warplanes struck dozens of Iranian targets inside Syria to stop the Islamic regime from gaining a foothold close to its borders.
“We are in a continuous campaign, and our policy is clear: We will not allow Iran to establish itself militarily in Syria,” Israel’s prime minister Benjamin Netanyahu warned Thursday.
Mr. Netanyahu said “Iran crossed a red line” and urged the world to “unite in order to sever the arms of evil spreading there and everywhere.”
“I repeat: whoever attacks us, we will attack them sevenfold and whoever prepares to attack us, we will act against them first. That is what we have done and will continue to do,” Netanyahu said.
“Things are about to get biblical,” warned Rabbi Pinchas Winston, who has written several books on biblical end times.
Winston told Breaking Israel News that he believes war between Iran and Israel is looming.
“Some people thought the Bible was dead,” Winston said. “They thought they could sit back and relax. That is clearly not the case in Syria and soon, that will be clear to everyone.”
Three days after Trump withdrew from the nuclear deal, the U.S. Treasury department is putting the economic squeeze back on Iran, slapping various financial institutions, individuals and political figures with tougher sanctions.

Parts of this story were reprinted with permission from CBN.com. Copyright The Christian Broadcasting Network, all rights reserved.