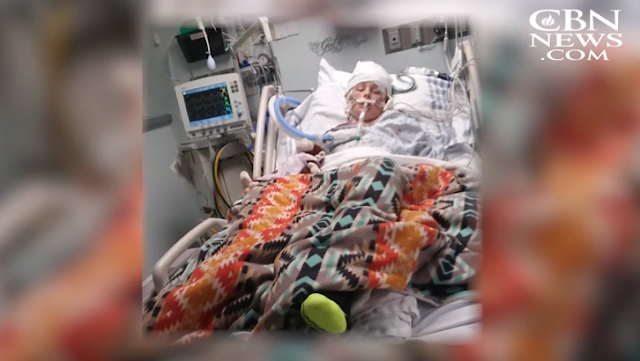 Alabama teen Trenton McKinley has defied all odds. After the 13-year-old boy was severely injured

in a dune buggy accident, his parents made the difficult decision to donate his organs following days
of him being apparently brain dead. But after the papers were signed, he miraculously regained
consciousness. ‘He is a Miracle’: Brain-dead Alabama Teen Comes Back to Life, Believes He Was in Heaven

The incident happened two months ago when McKinley was playing at a friend’s house in Alabama.
While the teen was riding in a small utility trailer being pulled by a dune buggy, his friend suddenly
hit the brakes and caused the trailer to flip. 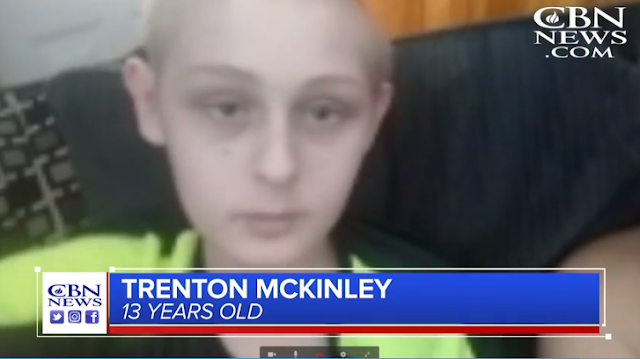 “I hit the concrete and the trailer landed on top of my head,” recalled McKinley, speaking to

CBN News. “After that, I don’t remember anything.”

His mother, Jennifer Reindl, told CBN News it was by the grace of God that her son is still living.

could sign a paper to donate his organs to save five other kids… and they would keep hitting
him with adrenaline till Monday… so I signed it,” Reindl wrote on a Facebook page set up to
help raise funds for his recovery.

“His eyes were solid black and dry and I knew he would not hesitate to save five more lives,”

Reindl continued, “The next day I got a call… they canceled the final brain wave test… right

before they hooked him up his hand moved, then his feet… so they looked at his eyes and they
were back… he had blue eyes… now they are green with small white specks like glitter… they
say when you look upon God… pigment changes… and my baby was in heaven for a whole day
… he is a miracle.”

CBN News spoke with Reindl and McKinley about his visit to heaven.

“I saw a dark male figure with a beard,” McKinley recalled. “He held my hand as I walked

through a field. I was holding a baby in my arm. My mom told me she lost a boy from a
miscarriage before I was born. I know it was my brother.”
Watch here: Teen visited heaven
If you would like to donate to his fundraiser, click here.
Love For His People, Inc. founded in 2010 by Steve & Laurie Martin. Charlotte, NC USA