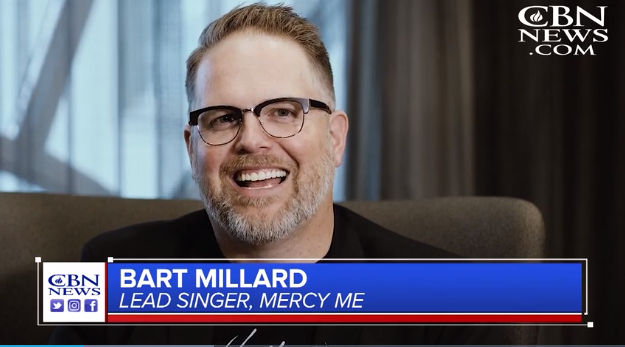 MercyMe: ‘I Can Only Imagine’ Movie Stirs Emotions ‘I Spent Most of My Life Trying to Bury’

03-16-2018
CBN News Efrem Graham
NASHVILLE, Tenn. — While Mercy Me’s “I Can Only Imagine” became the most popular Christian songs ever recorded. With more than two million downloads, the song reached double platinum status. And it’s the only Christian single to reach that milestone.
Despite the massive success, most listeners do not know the story behind those powerful words.
Painful Life Story Turns Into Hit Christian Song
Band leader Bart Millard turned to his life’s most painful pages to write the hit song. And his story is now a major motion picture hitting theaters Friday, March 16, 2018.

Millard sat down with CBN News is Nashville, following the film’s premiere.
“If I’m Talking About It, It’s Therapy”
Recalling his life story, Millard said, “When I talk about it, it’s five minutes between songs or it’s a song.”
“I am not one to sit around and think that my life is so fascinating that I should tell everyone about it. If I am talking about it, it’s therapy. I am writing a song about it, trying to work through it. That’s about it.”
Bart’s therapy plays out well in the major motion picture.
“The first time I saw it, it was really emotional,” said Bart.
“I didn’t know what to expect. How do you prepare for that?”
Stirred Emotions “I Spent Most of My Life Trying to Bury”
“I guess they did a good job because they stirred some emotions that I spent most of my life trying to bury.”
Jon Erwin directs the film, alongside his brother Andrew.
CBN News talked with Jon on the red carpet at the film’s debut.
Jon shared, “I have never enjoyed watching a movie with an audience more than this movie. I remember asking Bart, ‘What is the experience of I can only imagine? Why do people love this song?’ And he says, ‘It’s a rush of hope.’ And I think that is what the film delivers.”
Bart endured many years of abuse as a child. In the film, Dennis Quaid plays Bart’s abusive father.

Quaid told CBN News, “When I got the script, I had never heard the song. They gave me a script and a CD and I put it to the side. I mean I knew it was huge hit, but I didn’t know it. What hole was I in?”

“I read the script and it hit me so profoundly in the heart, in a place where I just don’t even have words, and that’s what the song does. And it grows on you too.”
Everything Works Out ‘In the Way It was Meant to Be’
The song’s story surprised some of those closest to Bart Millard, even Amy Grant who he originally wanted to sing the song.
Grant told CBN News, “I had actually recorded the song twice. But I was in a real transition in my own life. And nobody sings that song like Bart. Everything worked out the way it was meant to be.”
Home video captured the moment Amy gave the song back to Bart. She invited him to sing it alongside her on stage at her concert.
Bart still remembers that night.
He told CBN News, “It’s the scariest thing I have ever done. But it was cool, it was blast. And she’s been one of my best friends ever since.”

Watch video interview: I Can Only Imagine

I Can Only Imagine opens in theaters nationwide on March 16
Love For His People, Inc. founded in 2010 by Steve & Laurie Martin. Charlotte, NC USA