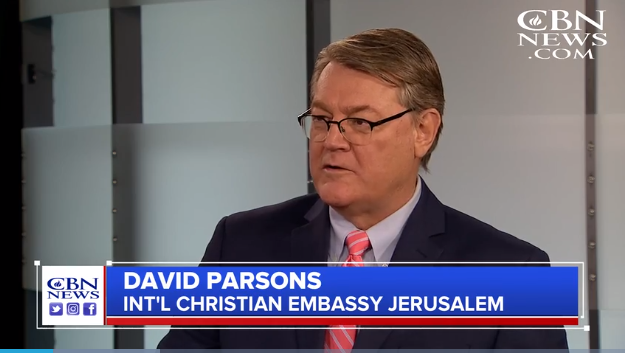 03-09-2018
CBN News Mark Martin
The Trump administration says it will move the US Embassy in Israel from Tel Aviv to Jerusalem in May to coincide with the Jewish State’s 70th anniversary celebration, a move that was called for in Washington more than 20 years ago.
In the 1990s, David Parsons, the vice president and senior international spokesman for International Christian Embassy Jerusalem, put together a draft of a bill to move the embassy from Tel Aviv to Jerusalem that had three parts: recognize Jerusalem as the capital of Israel, move the ambassador immediately and then, look into securing a building for the embassy.
Related ICEJ Urges Nations to Follow US Example on Embassy Move Israel at 70: A Light to the Nations President Trump: ‘It Is Time to Recognize Jerusalem as the Capital of Israel’ The bill became law in 1995.
“The bill got changed by the time it got through Congress; the presidential waiver added delay after delay for 23 years now, but President Trump is doing it in the order that we originally set out in our initial draft,” Parsons told CBN News.
“So I feel vindicated all that work in running around the halls of Congress was worth it,” he added.
Parsons stands by the importance of the Jerusalem Embassy Act of 1995.
“It’s symbolic, recognizing the 3,000, even 4,000-year-old Jewish claim and connection to Jerusalem,” he explained. “But there’s also substance to it in that the Palestinians have denied any Jewish connection to Jerusalem or the Temple Mount, and we wanted to affirm that.”
Parsons went on to say that the ICEJ, where he’s worked for the last 20 years, was founded on the principle of Christians standing with Jews in their ancient claim and connection to Jerusalem.
“The wisdom of that bill was shown just a few months later; it passed finally in October of ’95,” Parsons said. “In December of that year, Arafat took over Bethlehem for the first time, and if you were visiting Manger Square that Christmas season, you were not told about the connection between the birth of Jesus in this site.”
“You were handed (an) official PA paper, a document that said that the Western Wall in Jerusalem was an exclusively Muslim site,” he continued. “So tampering with history and such, we need to stand for truth that God attached the Jews to Jerusalem even to this day for a redemptive purpose.”
Presidents in the past have backed out on their promises to move the US Embassy to Jerusalem. Parsons weighed in on Trump’s decision to buck that trend.
“Other presidents have promised to do it, and once they get in the White House, they get all these briefings that the Arabs are going to be very upset; the whole region will explode,” Parsons told CBN News.
“The whole region’s already in tatters, and Trump had the courage of his convictions; he said, ‘I made a promise here, and I’m going to keep it,'” Parsons continued. “And he’s the first one who tested these threats of mayhem and violence, and there were some protests, but it did not turn out as bad as many thought.”
“And I think it just shows maybe they were just trying to intimidate us all along, and I think even now, the Palestinian Authority and Hamas are desperate to try and stir the Arab street against these embassies coming back, but there’s just not enough momentum, and the whole region is in political chaos still, so it just seems the right time to do this,” Parsons said.
In addition to taking a stand for the Jewish connection to Jerusalem and recognizing the holy city as the capital of Israel, ICEJ also works to help Jews around the world return to Israel or make Aliyah. The Washington Post featured ICEJ’s work in a recent article.
“We’ve been assisting Jews’ return to Israel from all around the world since we were founded in 1980,” Parsons told CBN News. “We already had people even in the 70’s helping Jews who could come out through Vienna, through Hungary and Austria. That was the only way out before the fall of communism.”
“But once Soviet communism fell, we’ve helped over 140,000 Jews make Aliyah to Israel,” he continued. “We helped around 3,000 last year, and if you look during our almost 40 years of existence, nearly every year we have helped about 10 percent of the Jews coming back move into Israel that year.”
“We do it because we believe it’s the hand of God, that ‘Hear O nations, He that scattered Israel will gather him,’” Parsons said. “And there’s an invitation in Isaiah. God says, ‘I’ll beckon to the Gentiles. They will carry you home on their shoulders and in their arms.’“
“We’re invited to play a role in this positive side of Bible prophecy, the restoration of Israel,” he continued.
Watch here: ICEJ’s David Parsons interview
Love For His People, Inc. founded in 2010 by Steve & Laurie Martin. Charlotte, NC USA