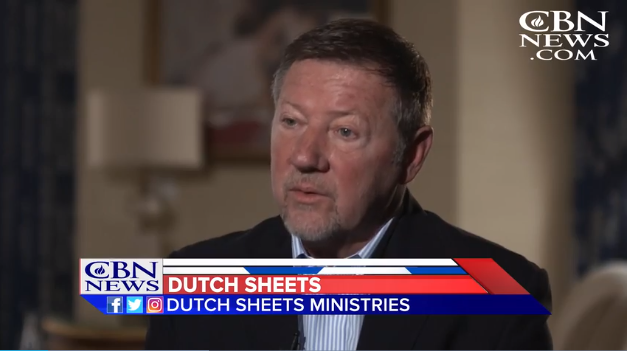 02-24-2018
CBN News Paul Strand
WASHINGTON—Internationally-known evangelist Dutch Sheets is bringing word to the nation’s capital that a turnaround is coming that will lead to a worldwide harvest of billions of souls.
“We are about to see the greatest influx of souls in history,” Sheets told CBN News in an exclusive interview.
Just before the February 22-24 Turnaround Conference began at the Trump International Hotel in Washington, Sheets explained what’s led to such an audacious prediction.
10 Months of Turmoil, 3 Years of Turnaround
He said his frequent ministry partner Chuck Pierce prophesied back in April, “10 months of turmoil before breakthrough came.  And then it’d be three years of turnaround for America.”
These last 10 months certainly have seen all sorts of turmoil — political upheaval, hurricanes, fires, floods and more.   But Sheets said now’s the time for God’s people to push for the promised turnaround.
“There’s another level of intercession, prophetic declaration, kingly intercession, making decrees for Him that is going to now launch us into what we’ve been asking for for 25, 30 years: a Third Great Awakening in America, another great awakening around the world.   And I believe the greatest harvest in history begins now,” Sheets asserted.
Time to Fly the “Appeal To Heaven” Flag Again
He spoke about the need to reignite the Appeal to Heaven movement: a time when the Founding Fathers acknowledged they couldn’t break away from Britain and become a free nation without God’s aid.   So they flew flags saying “Appeal to Heaven” during the Revolutionary War.
Sheets explained, “Our founders knew there was no way they could defeat the British unless God intervened: ‘if He’s in this, we can win.  If He’s not, this is laughable.’  So they said ‘we’re going to appeal to heaven.’  They actually put the phrase in the Declaration at the end.  They laid out their case and said ’so we appeal to the Supreme Judge of the universe.’”
And during the war, Sheets said, “They put this flag — ‘Appeal to Heaven’ — over the battlefields, over the ships.  People don’t know it, but our nation was born under a prayer movement — Appeal to Heaven.  And, of course, we prevailed by the grace of God.”
Sheets believes God is now saying to the nation, “’I need to use what I used to birth you to re-birth you.   Because America needs a re-birth.’  We have to have an awakening and a restoration.  And I think He’s saying to us, ‘What I used then is what I’ll use now: prayer.  If you’ll appeal to me, you can turn this nation around.”
Well-known Christian leader Cindy Jacobs prophesied to Sheets it should start on Washington ’s Birthday in the city named after him.
Sheets recalled Jacobs said to him, “Holy Spirit said, ‘tell Dutch re-launch on 2-22 in Washington D.C.’ And she said it will re-launch the worldwide prayer movement.”
‘We Are an Apostate Nation’
Many people believe America certainly needs a spiritual re-birth.
“The turnaround is a reversal of the turning away from God in this nation.     We are an apostate nation.  We have rejected Him,” Sheets asserted.
He continued, “Something has to happen in the hearts of people to where they will say internally and outwardly ‘what does God think about this?’   It’s a return to Him, it’s a return to His Word, it’s a return to His ways.  That’s what I think is coming.”
Such a turn in enough American hearts can lead to change that permeates all society.
How to Rejuvenate a Whole Country
“Scriptures say ‘righteousness exalts a nation,” Sheets explained.  “It’s the inevitable law of sowing and reaping.  If we sow seeds of righteousness, we receive the blessing of heaven.  That means physically and spiritually.  Marriages are healed.  Lives get put back together.   Drug addiction goes down.  Disease is eradicated.  To me, once you turn to God, blessing comes at every level.”
The evangelist told CBN News this certainly isn’t political.
“To me, the turnaround is not just prosperity, it’s not just ‘the conservatives win.’  The turnaround is spiritual.  It’s not Democrat.  It’s not Republican.  It’s a heart issue.  It’s a turning back to God.  And I think that’s about to happen.”
Salvation for Billions
And Sheets expects from a re-born America, God will change the world.
“This is all about what God wants to do around the world.  I believe we’ll see more people saved in the next 20 years than we have in the previous 2, 000,” Sheets predicted.  “I think it’ll be in the billions.  Not the ‘m,’ but the ‘b.’ The billions.   I think Asia is about to get hit with a tidal wave of revival.  And I think it’s going right into the Middle East.”
He concluded, “I believe it’s this incredible harvest that has been prophesied for so long, we’re moving into now.  The best days of the Church are not behind us.  They are ahead of us.”
If you think all of this has nothing to do with you, Sheets wants you to know, if you can pray and intercede for your nation and your world, you can have a part in this turnaround.