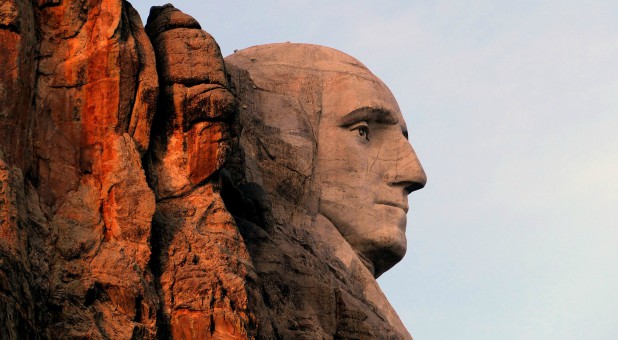 2/19/2018 EDDIE HYATT  CHARISMA NEWS
“He cannot die in battle. The Great Spirit protects that man and guides his destinies. He will become chief of nations, and a people yet unborn will hail him the founder of a mighty nation.”
These words were spoken by an old Native American chief concerning George Washington several years before the Declaration of Independence. He spoke these words as he reminisced with Washington and others about a battle, 15 years previous, when they were on opposite sides during the French and Indian Wars.
The Chief Saw God’s Hand on Washington
It was the Battle of Fort Duquesne in July 1755 when 1,459 British soldiers were ambushed by a large contingent of Native American warriors who had joined the French in their fight with the British for control of the North American continent.
It proved to be one of the bloodiest days in Anglo-American history with 977 British soldiers killed or wounded. It was a day, however, when Washington’s reputation for bravery began to spread throughout the land.
Washington, in his early 20s, had been recruited by the British because of his knowledge of the ways of the wilderness and the American Indians. He had acquired this knowledge in his work as a surveyor of wilderness territory.
Assigned to travel with the British General Braddock to take Fort Duquesne (present day Pittsburgh), Washington found his advice for traveling through the wilderness and dealing with the Indians ignored by Braddock who considered him a young, upstart colonist.
But when the ambush occurred and Braddock himself was wounded, Washington took charge and organized an orderly retreat while at the same time putting his own life at risk, rescuing the many wounded and placing them in wagons. During this time, two horses were shot out from under him and his clothes were shredded with bullets.
He emerged unscathed and gave glory to God, saying, “I was saved by the miraculous care of Providence that saved me beyond human expectation.” From that day, his reputation for bravery and leadership spread among both the English and the Native Americans.
The Prophecy Comes Forth
Years later, according to historian George Bancroft, Washington and a friend were exploring an area along the Ohio River when they encountered a group of Native Americans. Recognizing Washington, the natives invited the men back to their camp to meet with their chief, whom it turned out had fought on the side of the French in the Battle of Duquesne. They had a cordial visit and then the old chief, motioning toward Washington, spoke these amazing words. He said,

I am chief and ruler over all my tribes. My influence extends to the waters of the Great Lakes, and to the far blue mountains. I have traveled a long and weary path that I might see the young warrior of the great battle. It was on the day when the white man’s blood mixed with the streams of our forest that I first beheld this chief. I called to my young men and said, ‘Mark yon tall and daring warrior? He is not of the redcoat tribe—he hath an Indian’s wisdom, and his warriors fight as we do—himself alone is exposed. Quick, let your aim be certain, and he dies.’ Our rifles were leveled—rifles which, but for him, knew not how to miss. ‘Twas all in vain; a power far mightier than we shielded him from harm. He cannot die in battle. The Great Spirit protects that man, and guides his destinies. He will become chief of nations, and a people yet unborn will hail him the founder of a mighty nation.

The prophecy came to pass. Several years later the colonies declared their independence from Great Britain. Washington was appointed commander in chief of the colonial army and led his outnumbered, outgunned troops to an amazing victory over the British through numerous providential events. He later presided over the Constitutional Convention, was unanimously elected the first president of the United States and became known as “the father of his country.”
What We Must Learn from Washington
Washington was devout in his Christian faith and respectful toward the Native people and culture, but he never allowed the two to be in conflict. He was always clear in his belief in Jesus Christ as the Savior of the world, and that only Christianity offered the moral and intellectual underpinnings for a successful nation.

He clearly expressed this in a 1779 meeting with chiefs from the Delaware tribe who had expressed a desire for their children to be trained in American schools. Washington responded cordially and assured the chiefs the new nation would look upon their children as their own. He then commended the chiefs for their decision and said,
You do well to wish to learn our arts and our ways of life and above all, the religion of Jesus Christ. These will make you a greater and happier people than you are. Congress will do everything they can to assist you in this wise intention.
For Washington, sharing the gospel with those of other religions was like sharing bread with a starving man. It was the just and righteous thing to do. This is also why he had no qualms praying in public, “Bless, O Lord, the whole race of mankind and let the world be filled with the knowledge of Thee and Thy Son, Jesus Christ.”
In our world of multiculturalism and religious pluralism, we need to take a lesson from Washington in this regard. Neither Islam nor secularism offer the moral and intellectual belief system for a peaceful, civil and free society. This is obvious from merely observing the nations where those doctrines hold sway.
We, therefore, must never be shy or apologetic about our Christian faith. It is what made America great in the first place; and only a revival of biblical Christianity will make America great and peaceful again.
Like Washington, we can be tolerant and respectful of those of different religions and cultures, but we do an injustice to them and ourselves when we do not stand for the truth that is in Jesus. In the words of the Old Testament prophet, we forsake our own mercies (Jon. 2:8) when we compromise our faith for political or cultural convenience.
Washington was very clear in his belief that only a Christian worldview would sustain America. Before he passed from this life, he warned the fledgling nation,
The propitious smiles of heaven can never be expected on a nation that disregards the external rules of order and right, which heaven itself has ordained.
Concluding Prayer
As we remember George Washington on his birthday (Feb. 22), let us remember the prophecy of the old chief, and let it be a reminder that we are not here by accident or coincidence. God raised up George Washington and America for a divine purpose, and I am certain that purpose is not yet fulfilled.
Eight years ago I thought, perhaps, that God was finished with America as a nation. But then I experienced an unusual visitation of God, such as I had not known before or since. Over several hours, He renewed my hope that America “could” see another Great Awakening, and I clearly saw for the first time that America was birthed out of a Great Awakening and providential acts of God.
So, I ask you to join me in praying the prayer of the psalmist in Psalm 85:6-7. He prayed, “Will you not revive us again, that Your people may rejoice in you? Show us Your mercy, O LORD, and grant us Your deliverance.”
Yes, do it once again in America, O Lord!

This article is derived from Dr. Eddie Hyatt’s book, Pilgrims and Patriots, available from Amazon and his website at eddiehyatt.com. Dr. Hyatt also conducts “America Reawakening” events in which he shows how America was birthed out of a great, spiritual awakening and calls the nation to pray for a Great Reawakening. You can read more about this on his website at eddiehyatt.com/america_reawakening.html
Connect with God in a deeper way as you read His Word. Select Bibles are now 50% OFF plus Free Shipping and a Free Gift. Show me the Bibles!
Encounter the Holy Spirit and develop a relationship that saturates you in His peace, love and joy. Explore the Life in the Spirit Series.
FREE GIFT! Download Pastor Bill Johnson’s 40-page mini eBook, The War In Your Head, and unlock your supernatural lifestyle. CLICK HERE
Love For His People, Inc. founded in 2010 by Steve & Laurie Martin. Charlotte, NC USA