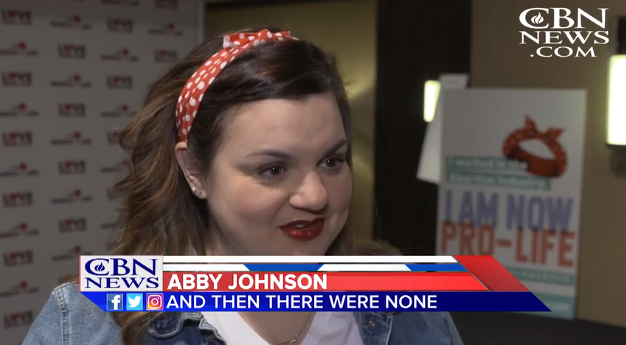 ‘It Is Abnormal to Sift Through Body Parts of Babies’: Why 419 Abortion Workers Have Quit
02-13-2018
CBN News Paul Strand
WASHINGTON – So many workers in the abortion industry are quitting, a group that formed to get them out is stunned at its own success.
Abby Johnson, head of the organization And Then There Were None, is out to end abortions by leaving no one to perform them.
At a recent gathering in which the nation’s capital was flooded with pro-lifers participating in the annual March for Life, Johnson talked of wanting to depopulate the abortion industry after she left her job as a Planned Parenthood manager and became a pro-life advocate.
Related President Trump Ready to Sign Late-term Abortion Bill but Will It Have Enough Votes in the Senate? A Fetus Isn’t a Person? 5 Bible Verses That Challenge Abortion Expected a Dozen, Got 419
She expected only 10 to 12 workers a year to actually quit.
“Because it is a hard sell,” she said, “trying to convince people who work in the abortion industry to leave and come to the pro-life side.”
Johnson can hardly believe how high the resignation numbers really are.
“We are up to 419 abortion workers who have left the abortion industry and who have come through And Then There Were None,” she told CBN News.  “And we also have had seven full-time abortion doctors leave the abortion industry.”
‘Don’t Want to Participate in One More Abortion’
Registered nurse Shelley Guillory of Lafayette, Louisiana admitted she had to fight her own beliefs to assist in the many abortions she aided.
“Internally it was a conflict.  And it just began to fester and fester till I just couldn’t be there anymore,” she recounted.
A sudden family tragedy – the death of her 20-year-old son – gave her three months away from the clinic. A pro-life protestor and sidewalk counselor showed her compassion when she returned.
Guillory told CBN News he said, “‘What are you doing back here?  We thought you quit.’  And it was like no, my son passed away, so I was out briefly.   And he was like, ‘oh, I’m sorry to hear that.’  He said, ‘I wish you wouldn’t have come back.'”
“I remember walking back into the clinic and thinking a little while and saying, ‘I really don’t want to be here and I don’t want to even participate in one more abortion,'” she recalled.
She quit that day. And Then There Were None rushed to her aid.
“They assisted me with finances temporarily until I was able to find another job, and gave me emotional support. Helped me redo resumes,” Guillory explained.
‘Guilt Gets You in the Gut’
She really needed that emotional support after taking part in all those abortions.
“Guilt gets you in the gut where you least expect it,” she revealed. “How could I have ever participated when it’s not something that I would have chosen for myself or my daughters?”
Johnson understands that guilt over what those abortion workers do every day.
“It is abnormal to convince a woman to take the life of her child,” she said. “It is abnormal to pit women against their children. It is abnormal to sift through body parts of babies.”
Abortion Job Might Have Killed Her
Annette Lancaster was so wounded in her soul doing what she did at the Chapel Hill, North Carolina Planned Parenthood, she isn’t sure she would have survived without And Then There Were None backing her up.
“If I wasn’t in this organization, I don’t think I would be here today,” she said.
“When women would ask me ‘do you think God is going to forgive me?’ And trying to answer that question in a roundabout way, started affecting me.  I was just in a very dark place in my life while working there,” Lancaster revealed.
Lancaster knew about And Then Were None because of its business card popping up.  In fact, a whole pile of them popping up.
“I actually received some cards that were put on my car,” she recalled. “Not just one or two, but they were actually all around my car. And then my director was there and she said ‘you’re going to throw those away, right?’  But I took one and I kept it in my pocket.”
How She Came to Be ‘Quit/Fired’
Her spiral downward on-the-job continued until she wrote up a letter of resignation and one particular day prepared to hand it in and quit. But then came a sudden surprise on the same day.
“I was called in that day into the office and was told ‘you just don’t fit in here anymore. And so I ‘quit/fired,'” she said with a laugh. “I think they could tell the abortion numbers were going down tremendously when I was the manager there. So they could tell that I was not encouraging women to do the procedures, but rather discouraging them.”
A Shady and Shoddy Reputation
A problem that some have getting out of the abortion business is that it has such a shady and shoddy reputation, many people don’t want to hire those who worked in it. So Johnson is pleading with businesses, especially medical ones, to get over that prejudice and contact her organization and start working with it.
“Because we want to be able to have placements all over the country where we can say, ‘Hey, you leave, I have a job for you today,'” she said.
Johnson doesn’t just appreciate those workplaces that have partnered with her organization, but desperately-needed donors as well.
‘Go With Your Heart and Listen to God’
“We don’t have a Warren Buffett who’s giving us millions of dollars,” Johnson said with a smile.
CBN News asked Johnson if she was one of the family members who own the company, Johnson & Johnson.
“No, I’m not the Johnson & Johnson Johnson,” she replied.  “I don’t have the money to fund it myself.  It’s just generous people – ordinary people –giving this extraordinary gift. And it’s literally changing and saving lives.”
As for those doctors, nurses and other workers who may be doubting if they should be in the abortion world, Lancaster has this message.
“I would tell them ‘definitely go with your heart. Listen to God,” she told CBN News.
Watch here: Leaving Abortion Jobs
Love For His People, Inc. founded in 2010 by Steve & Laurie Martin. Charlotte, NC USA