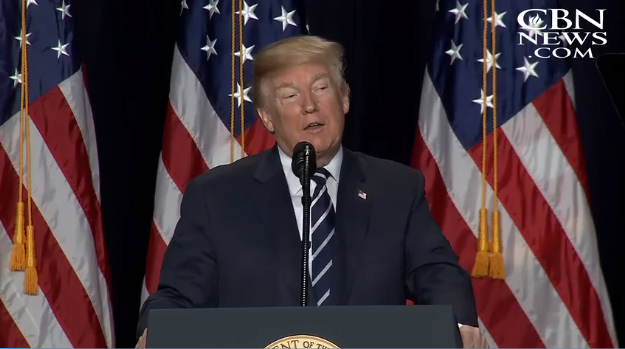 ‘Our Rights Come From Our Creator’: Trump, Scalise Speak at National Prayer Breakfast

02-08-2018
CBN News
Watch President Donald Trump National Prayer Breakfast address below.
People from around the world gathered in Washington, DC, Thursday morning for the 66th annual National Prayer Breakfast.
More than 3,500 hundred attendees were at the Washington Hilton for the event – among them, President Donald Trump and members of Congress.
Related Here’s What the Trump Cabinet Bible Study Is Learning: Leader Responds to Attacks Watch the full National Prayer Breakfast below:
The president stressed the importance of religious freedom and reminded those present that America is one nation under God.
“Our rights are not given to us by man. Our rights come from our Creator. No matter what, no earthly force can take those rights away,” Trump told the audience.
“When Americans are able to live by their convictions, to speak openly of their faith and to teach their children what is right, our families thrive, our communities flourish, and our nation can achieve anything at all,” he said.
FULL SPEECH: ‘One Nation, Under God’: President Trump’s Entire Faith-Filled Speech at the National Prayer Breakfast
The President also pointed to God’s hand at work in the world today.
View image on Twitter 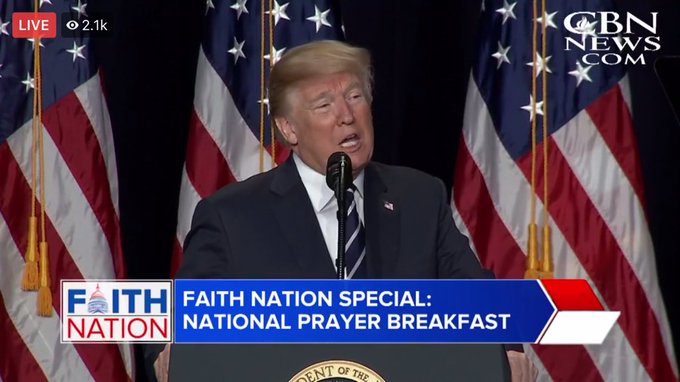 @BenKennedyTV
TRUMP “All we have to do is open our eyes and look around to see God’s hand. As long as we open our hearts to God’s love America will forever be the land of the free & home of the brave.” #NationalPrayerBreakfast

Twitter Ads info and privacy
Congressman Steve Scalise (R-LA), who narrowly survived being shot last year at a congressional baseball event, also spoke at the breakfast event. Scalise has publicly praised God for helping him survive the shooting, saying previously, “I am definitely a living example that miracles really do happen.”
During his prayer breakfast speech, Scalise again pointed to God over and over again, in his own story of survival as well as in references to American government.
“This was a nation founded with a deep belief in God,” Scalise said, pointing to the way the Founding Fathers talked about faith and God as they were creating a new nation.
“You can’t separate church from state,” Scalise continued. “This idea that you could just check your faith at the door… faith is part of who you are, it’s part of who I am.”
View image on Twitter 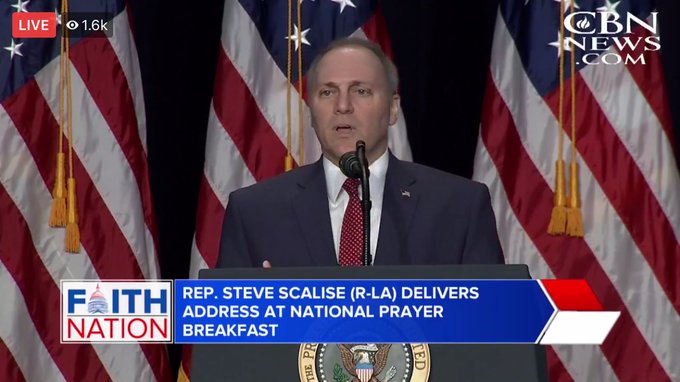 @BenKennedyTV
FAITH LEADERS “You are what hold the bond together.. this is a Nation founded with a deep belief in God” @SteveScalise

Twitter Ads info and privacy
Meanwhile, Philadelphia Eagles quarterback Carson Wentz was announced as the keynote speaker at the dinner for the 66th National Prayer Breakfast. Wentz replaced Vice President Mike Pence who is visiting Pyeongchang, South Korea for the opening ceremonies for the 2018 Winter Olympics.
The prayer event is organized by the Fellowship Foundation, a nonprofit religious organization designed to bring together political, religious and business leaders.
The National Prayer Breakfast is actually an all-day series of meetings and luncheons designed to build relationships. Every president since Dwight Eisenhower has spoken at the prayer event.
The main event, the morning breakfast, which typically has two speakers, including the president and a mystery guest. Previous speakers include Mother Teresa, Bono and former British Prime Minister Tony Blair.
The breakfast was started in 1953 when the members of Congress invited President Eisenhower to join them for a fellowship breakfast “in the spirit of Jesus.” The breakfast has continued each year, hosted and directed by members of the prayer groups in the US Senate and US House of Representatives.
READ: Super Bowl-Winning Eagles QB Nick Foles Has a Bigger Dream: ‘I Want to Be a Pastor’
Love For His People, Inc. founded in 2010 by Steve & Laurie Martin. Charlotte, NC USA

Desperation – Now Think On This by Steve Martin

A Passover Message of Redemption ✡ “Let Him Come and Eat” – ISRAEL365