Photo Credit: philadelphiaeagles via Instagram
‘All the Glory Belongs to God’: The Faith of the Super Bowl-Winning Philadelphia Eagles
02-04-2018
CBN News Mark Martin,
Benjamin Gill
Do faith and football go together? For players on the Philadelphia Eagles, the answer is a resounding “yes.”
The Eagles won their first Super Bowl 41-33 over the New England Patriots in a hard-fought game Sunday night in Minneapolis.
“All glory to God,” MVP Quarterback Nick Foles said right after the win.
Related “I felt calm. We have such a great group of guys, such a great coaching staff… we’re very blessed,” he said.
Just nine years ago, Eagles head coach Doug Pederson was coaching high school. Now he’s a Super Bowl champion.
“I can only give the praise to my Lord and Savior Jesus Christ for giving me this opportunity,” Pederson said Sunday night.
And touchdown-scoring Wide Receiver Zach Ertz echoed the same sentiment.
“Glory to God first and foremost,” Ertz said.
And despite being sidelined by a season-ending injury, Eagles QB Carson Wentz threw all his support to Foles, and all the glory to God. 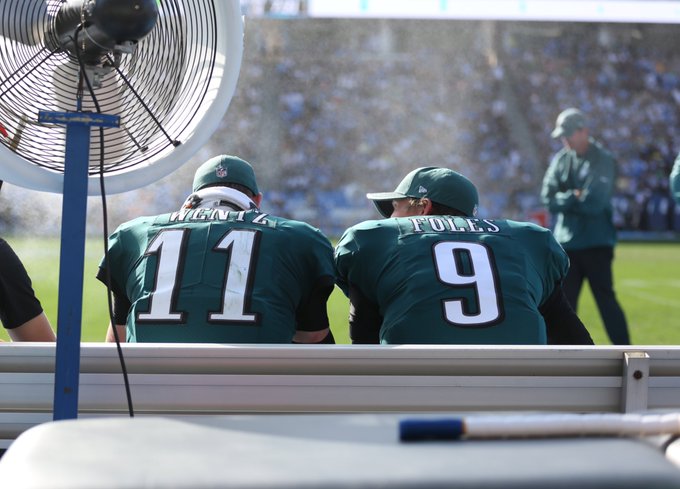 @cj_wentz
My bro is gonna shine bright tonight! So excited to see him & this team go out and compete tonight. Been through it all this year as a team, & yet, here we are! WE ALL WE GOT. WE ALL WE NEED. God’s writing an unbelievable story and he’s getting all the glory! #AO1 #flyeaglesfly

Twitter Ads info and privacy
NFC Conference Champions
On January 21st, the Eagles clinched the NFC Conference Championship, earning the right to face the New England Patriots in Super Bowl LII.
“First and foremost, all glory belongs to God. I wouldn’t be here without Him and this is just very humbling and unbelievable,” QB Nick Foles said immediately after that Eagles’ win over the Minnesota Vikings. “I’m blessed to have amazing teammates, amazing coaches.”
Foles, who turned in an amazing performance to lead the Eagles to victory, is bold about professing his born-again faith, describing himself on Twitter as a: “Believer in Jesus Christ, husband, father, son, brother.”
A number of his teammates share that faith in Christ, and you can bet many on the team were as “prayed up” for the Super Bowl as they were throughout the season.
At the start of the season, Foles and teammates Zach Ertz, Trey Burton, Carson Wentz, and Chris Maragos released a Bible study on humility and surrender through the YouVersion Bible app.
And back in November, the Eagles team released a video on its Facebook page entitled, “The Locker Room’s Binding Force.” It’s a look at the Christian faith of three players and how Christianity is a big part of the team’s unity.
Starting quarterback Carson Wentz, wide receiver Torrey Smith, and safety/special teams player Chris Maragos share their testimonies in the video.
“I was kind of on this downward spiral because the things I was trying to place in my life to give me satisfaction would last for a little bit and then they’d fade away,” Maragos said in the video. “And that was my sophomore year in high school.”
“I was really at a crossroads at that point and had to make a decision on where I was going,” he continued. “And that’s when I gave my life to Christ, and really he supplied that satisfaction and that joy for me.”
Players have the opportunity to attend chapel among other things.
“On every Monday night, we have a couple’s Bible study. We have a Thursday night team Bible study,” Wentz explained in the video. “And then Saturday nights, we actually get together the night before the game and just kind of pray; talk through the Word; what guy’s have been reading, what they’re struggling with, and just kind of keep it real with each other.”
“To have that here in an NFL facility like this, it’s really special,” he added.
“As men, you tend to be very sheltered. If I’m going through some things, I may not express that to the next man,” Smith shared. “Only you can kind of expose your weaknesses and things you want to work on, whether it’s in your relationship or your marriage or your family, whatever it may be.”
“When you’re able to talk about it amongst your brothers, amongst your family, it helps you grow,” he continued. “And when you realize that you can apply Biblical principles to it, it helps us all grow.”
“I think the biggest thing that we’re always challenging each other with is just to not lose sight of the bigger picture,” Wentz said. “I think wins, losses, highs, lows, everything that comes with this game, it’s so easy to take your mind and your eyes off of the ultimate prize, and that’s living for the Lord.”
“And we want to be united,” Maragos said. “We want to support each other; we want to support each other in our lives through the difficulties off the field as well as on the field.”
“And so I think it’s really kind of something to where we’re all just kind of binding together to kind of keep each other sharpened and keep pushing forward,” he continued.
That unity helped propel them to the NFC Championship game and now a 41-33 win over the Patriots in the Super Bowl.
Love For His People, Inc. founded in 2010 by Steve & Laurie Martin. Charlotte, NC USA