When two NFL teams playing in the Super Bowl make a media appearance before Sunday’s big game, it’s not uncommon for players on both teams to relay how they respect the players on the opposing side.
However, the New England Patriots Matthew Slater, himself a devout Christian, didn’t just talk about his respect for the other team’s playing ability. He spoke about how he admired their faith.
During a recent press event for the two teams, CBS Sports’ Cody Benjamin asked the Patriots special teams captain if he respected guys like the injured Eagles QB Carson Wentz who has been quite vocal about his faith.
Related

‘My Faith in the Lord Means Everything’: How These Eagles and Patriots Are Using Super Bowl LII to Glorify God

“I really appreciate Carson’s boldness for the Gospel, how he represents Christ day in and day out,” the 10-year NFL veteran responded. “And it’s not only him. You know, Nick does that as well. Chris Maragos. Brother Burton. I mean, there are a lot of brothers over there that stand firm for what they believe in, they represent the Gospel in a tremendous fashion.”
“Ultimately, I know, to them and myself, that’s what’s going to matter for eternity beyond the game of football,” Slater said. “They’ll be my brothers in the Lord for a long time to come,” he continued. “But on Sunday, obviously we’ll be competing.” 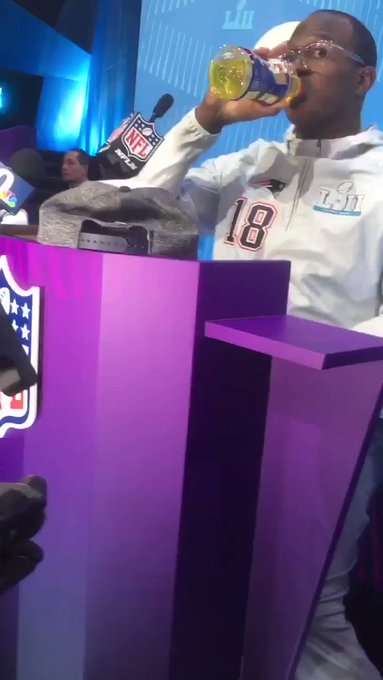 Twitter Ads info and privacy
Slater, who may hold to what’s known as The Patriot Way on the field, has his own way off the field. He’s known to all the Patriots fans for his football, his family, and his faith.
“The way I look at football, it’s a tremendous opportunity not only to play a game that I love and provide for my family; it gives me a platform for what I believe is the most important thing, and that’s reaching people, connecting with people, building relationships and trying to show them the love of Christ,” Slater told Patriots.com in 2016. “I’ve always looked at football as a gift. It’s a vehicle that the Lord has given me to reach people.”
Last year, before New England’s appearance in Super Bowl LI, Slater also took the opportunity to talk about Jesus Christ to the media.
In a short video that was posted to Youtube, Slater is shown talking to the assembled reporters about his faith and how they too can become Christians.
“You have to understand who God is and who his Son is. And you have to understand what God says about your sin,” Slater said as he sits behind a table with a microphone stand on camera. “From there, you realize that, ‘Hey, I’m a sinful person and my sin has separated me from the eternal perfect God.'”
“But there’s a backup plan in that. He sent his son his son Jesus.  And I believe that Jesus is the Son of God… is God.  He came here. He died on the cross for my sins, your sins, everybody’s sins, everybody who’s willing to accept that truth,” the New England Patriot said. “And if you’re able to put your trust in Him, and confess with your mouth and believe in your heart that He is who He says he is.  Then from there, you can initiate a relationship with Him.”
“But I also believe that repentance is a big part of that as well. You have to turn from your old life of sin and try to model a Christ-like life. I think that’s something will never fully figure out on this side of Glory, but it is certainly a one day at a time process that I’ve been so blessed to be on for the last 25 or so years,” Slater said.
And even though the television cameras may not show it, after Sunday’s game, you’ll find Slater holding hands with teammates and opponents alike as he leads them in prayer.
Love For His People, Inc. founded in 2010 by Steve & Laurie Martin. Charlotte, NC USA

The Return Event Links Below are the links that you will access the event tonight, September 25th and tomorrow, September

The Day of Atonement is almost here! – ALIYAH RETURN CENTER IN THE GALILEE, ISRAEL